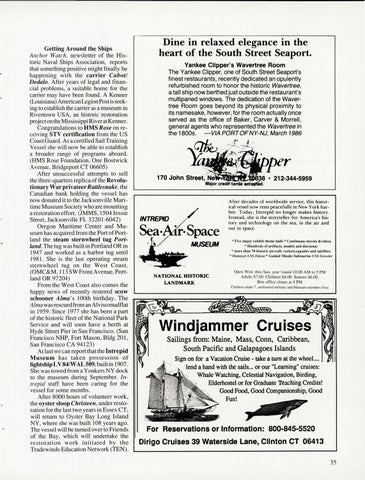 Getting Around the Ships Anchor Watch, newsletter of the Historic Naval Ships Association, reports that something positive might finally be happening with the carr ier Cabot! Dedalo. After years of legal and financial problems, a suitable home for the carrier may have been found. A Kenner (Louisiana) American Legion Post is seeking to establish the carrier as a museum in Rivertown USA, an historic restoration project on the Mississippi River at Kenner. Congratulations to HMS Rose on receiving STV certification from the US Coast Guard. As a certified Sail Training Vessel she will now be able to establish a broader range of programs aboard. (HMS Rose Foundation, One Bostwick A venue, Bridgeport CT 06605) After unsuccessful attempts to sell the three-quarters replica of the Revolu tionary War privateer R attlesnake, the Canadian bank holding the vessel has now donated it to the Jacksonville Maritime Museum Society who are mounting arestorationeffort. (JMMS, 1504Jessie Street, Jacksonville FL 32201-6042) Oregon Maritime Center and Museum has acquired from the Port of Portland the steam sternwheel tug Portland. The tug was built in Portland OR in 1947 and worked as a harbor tug until 1981 . She is the last operating steam sternwheel tug on the West Coast. (OMC&amp;M, 113 SW Front A venue, Portland OR 97204) From the West Coast also comes the happy news of recently restored scow schooner Alma&#39;s lOOth birthday. The Alma was rescued from an Alviso mudflat in 1959. Since 1977 she has been a part of the historic fleet of the National Park Service and will soon have a berth at Hyde Street Pier in San Francisco. (San Francisco NHP, Fort Mason, Bldg 201 , San Francisco CA 94123) At last we can report that the Intrep id Muse u m has taken possession of lightship L V 84/WAL 509, built in 1907. She was towed from a Yonkers NY dock to the museum during September. Intrepid staff have been caring for the vessel for some months. After 8000 hours of volunteer work, the oyster sloop Christeen , under restoration for the last two years in Essex CT, will return to Oyster Bay Long Island NY, where she was built 108 years ago. The vessel will be turned over to Friends of the Bay, which will undertake the restoration work initiated by the Tradewinds Education Network (TEN).

Dine in relaxed elegance in the heart of the South Street Seaport. Yankee Clipper&#39;s Wavertree Room The Yankee Clipper, one of South Street Seaport&#39;s finest restaurants, recently dedicated an opulently refu rbished room to honor the historic Wavertree , a tall ship now berthed just outside the restaurant&#39;s multipaned windows. The dedication of the Wavertree Room goes beyond its physical proximity to its namesake, however, for the room actually once served as the office of Baker, Carver &amp; Morrell , general agents who represented the Wavertree in the 1800s. - VIA PORT OF NY-NJ, March 1986