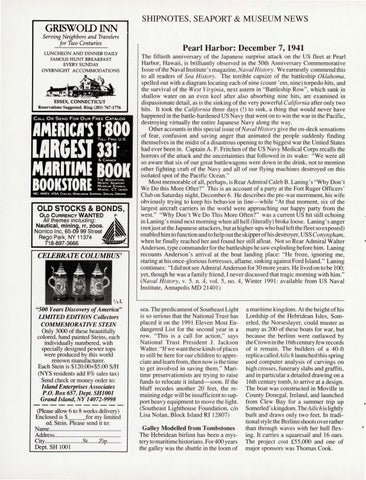 Pearl Harbor: December 7, 1941 The fiftieth anniversary of the Japanese surprise attack on the US fleet at Pearl Harbor, Hawaii, is brilliantly observed in the 50th Anniversary Commemorative Issue of the Naval Institute&#39;s magazine, Naval History. We earnestly commend this to all readers of Sea History. The terrible capsize of the battleship Oklahoma, spelled out with a diagram locating each of nine (count &#39;em, nine) torpedo hits, and the survival of the West Virginia, next astern in &quot;Battleship Row&quot;, which sank in shallow water on an even keel after also absorbing nine hits, are examined in dispassionate detail, as is the sinking of the very powerful California after only two hits. It took the California three days (!) to si nk, a thing that wou ld never have happened in the battle-hardened US Navy that went on to win the war in the Pacific, destroying virtually the entire Japanese Navy along the way. Other accounts in this special issue of Naval History give the on-deck sensations of fear, confusion and saving anger that animated the people suddenly finding themselves in the midst of a disastrous opening to the biggest war the United States had ever been in. Captain A. F. Fritchen of the US Navy Medical Corps recalls the horrors of the attack and the uncertainties that followed in its wake: &quot;We were all so aware that six of our great battlewagons were down in the drink, not to mention other fighting craft of the Navy and all of our flying machines destroyed on this isolated spot of the Pacific Ocean.&quot; Most memorable of all, perhaps, is Rear Admiral Caleb B. Laning &#39;s &quot;Why Don &#39; t We Do this More Ofter?&quot; This is an account of a party at the Fort Ruger Officers &#39; Club on Saturday night, December 6. He describes the pre-war merriment, his wife obviously trying to keep his behavior in line-while &quot;At that moment, six of the largest aircraft carriers in the world were approaching our happy party from the west.&quot; &quot;Why Don&#39;t We Do This More Often?&quot; was a current US hit still echoing in Laning&#39;s mind next morning when all hell (literally) broke loose. Laning &#39;s anger (not just at the Japanese attackers, but at higher-ups who had left the fleet so exposed) enabled him to function and to help out the skipper of his destroyer, USS Conyngham, when he finally reached her and found her still afloat. Not so Rear Admiral Walter Anderson, type commander for the battleships he saw exploding before him . Laning recounts Anderson&#39;s arrival at the boat landing place: &quot;He froze, ignoring me, staring at his once-glorious fortresses, aflame, sinking against Ford Island.&quot; Laning continues: &quot;IdidnotseeAdmiral Anderson for30 more years. He lived on to be 100; yet, though he was a family friend, I never discussed that tragic morning with him.&quot; (Naval History, v. 5. n. 4, vol. 5, no. 4, Winter 1991: available from US Naval Institute, Annapolis MD 21401)

sea. The predicament of Southeast Light is so serious that the National Trust has placed it on the 1991 Eleven Most Endangered List for the second year in a row. &quot;This is a call for action ,&quot; says National Trust President J. Jackson Walter. &quot;If we want these kinds of places to still be here for our children to appreciate and learn from , then now is the time to get involved in saving them.&quot; Maritime preservationists are trying to raise funds to relocate it inland-soon. If the bluff recedes another 20 feet, the remaining edge will be insufficient to support heavy equipment to move the light. (Southeast Lighthouse Foundation, c/o Lisa Nolan, Block Island RI 12807)

Galley Modelled from Tombstones The Hebridean birlinn has been a mystery to maritime historians. For 400 years the galley was the shuttle in the loom of

a maritime kingdom. At the height of his Lordship of the Hebridean Isles, Somerled, the Norseslayer, could muster as many as 200 of these boats for war, but because the berlinn were outlawed by the Crown in the 16th century few records of it remain. The builders of a 40-ft replica called Ailich launched this spring used computer analysis of carvings on high crosses, funerary slabs and graffiti, and in particular a detailed drawing on a 16th century tomb, to arrive at a design. The boat was constructed in Moville in County Donegal, Ireland, and launched from Clew Bay for a summer trip up Somerled &#39;s kingdom. TheAilich is light! y built and draws only two feet. In traditional style the Berl inn shoots over rather than through waves with her hull flexing. It carries a squaresail and 16 oars. The project cost ÂŁ55,000 and one of major sponsors was Thomas Cook.