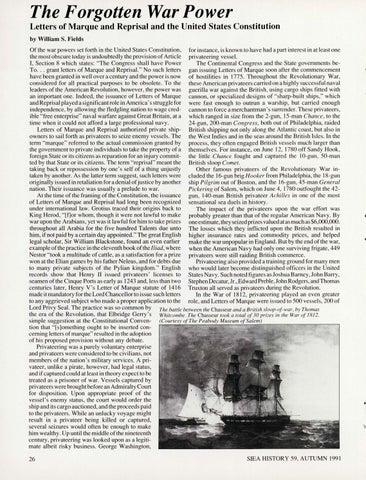 The Forgotten War Power Letters of Marque and Reprisal and the United States Constitution by William S. Fields

Of the war powers set forth in the United States Constitution, for instance, is known to have had a part interest in at least one the most obscure today is undoubtedly the provision of Article privateering vessel. I, Section 8 which states: &quot;The Congress shall have Power The Continental Congress and the State governments beTo . . . grant letters of Marque and Reprisal. &quot; No such letters gan issuing Letters of Marque soon after the commencement have been granted in well over a century and the power is now of hostilities in 1775. Throughout the Revolutionary War, considered for all practical purposes to be obsolete. To the these American privateers carried on a highly successful naval leaders of the American Revolution , however, the power was guerilla war against the British, using cargo ships fitted with an important one. Indeed, the issuance of Letters of Marque cannon, or specialized designs of &quot;sharp-built ships,&quot; which and Reprisal played a significant role in America&#39;s struggle for were fast enough to outrun a warship, but carried enough independence, by allowing the fledgling nation to wage cred- cannon to force a merchantman&#39;s surrender. These privateers, ible &quot;free enterprise&quot; naval warfare against Great Britain, at a which ranged in size from the 2-gun, 15-man Chance, to the time when it could not afford a large professional navy. 24-gun, 200-man Congress, both out of Philadelphia, raided Letters of Marque and Reprisal authorized private ship- British shipping not only along the Atlantic coast, but also in owners to sail forth as privateers to seize enemy vessels. The the West Indies and in the seas around the British Isles. In the term &quot;marque&quot; referred to the actual commission granted by process, they often engaged British vessels much larger than the government to private individuals to take the property of a themselves. For instance, on June 12, 1780 off Sandy Hook, foreign State or its citizens as reparation for an injury commit- the little Chance fought and captured the I 0-gun, 50-man ted by that State or its citizens. The term &quot; repri sal&quot; meant the British sloop Comet. taking back or repossession by one&#39;s self of a thing unjustly Other famous privateers of the Revolutionary War intaken by another. As the latter term suggest, such letters were eluded the 16-gun brig Hooker from Philadelphia, the 18-gun originally issued in retaliation for a denial of justice by another ship Pilgrim out of Boston, and the 16-gun , 45-man General nation. Their issuance was usually a prelude to war. Pickering of Salem, which on June 4, 1780 outfought the 42At the time of the framing of the Constitution, the issuance gun, 140-man British privateer Achilles in one of the most of Letters of Marque and Reprisal had long been recognized sensational sea duels in history. The impact of the privateers upon the war effort was under international law. Grotius traced their origins back to King Herod, &quot; [f]or whom, though it were not lawful to make probably greater than that of the regular American Navy. By war upon the Arabians, yet was it lawful for him to take prizes one estimate, they seized prizes valued at as much as $6,000,000. throughout all Arabia for the five hundred Talents due unto The losses which they inflicted upon the British resulted in him, if not paid by a certain day appointed.&quot; The great English higher insurance rates and commodity prices, and helped make the war unpopular in England. But by the end of the war, legal scholar, Sir William Blackstone, found an even earlier example of the practice in the eleventh book of the Iliad, where when the American Navy had only one surviving frigate, 449 Nestor &quot;took a multitude of cattle, as a satisfaction for a prize privateers were still raiding British commerce. won at the Elian games by hi s father Neleus , and for debts due Privateering also provided a training ground for many men to many private subjects of the Pylian kingdom .&quot; English who would later become di stingui shed officers in the United records show that Henry II issued privateers&#39; licenses to States Navy. Such noted figures as Joshua Barney, John Barry, seamen of the Cinque Ports as early as 1243 and, less than two Stephen Decatur, Jr. , Edward Preble, John Rodgers, and Thomas centuries later, Henry V&#39;s Letter of Marque statute of 1416 Truxton all served as privateers during the Revolution. madeitmandatoryfortheLordChancellortoissuesuchletters In the War of 1812, privateering pl ayed an even greater to any aggrieved subject who made a proper application to the role, and Letters of Marque were issued to 500 vessels, 200 of Lord Privy Seal. The practice was so common by The battle between the Chasseur and a British sloop-of-war, by Thomas the era of the Revolution, that Elbridge Gerry &#39;s Whitcombe. The Chasseur took a total of 30 prizes in the War of 1812. simple suggestion at the Constitutional Conven- (Co urtesy of The Peabody Museum of Salem) tion that &quot; [s]omething ought to be inserted concerning letters of marque&quot; resulted in the adoption of his proposed provision without any debate. Privateering was a purely voluntary enterprise and privateers were considered to be civilians, not members of the nation &#39;s military services . A privateer, unlike a pirate, however, had legal status, and if captured could at least in theory expect to be treated as a prisoner of war. Vessels captured by privateers were brought before an Admiralty Court for disposition. Upon appropriate proof of the vessel&#39;s enemy status, the court would order the ship and its cargo auctioned, and the proceeds paid to the privateers. While an unlucky voyage might result in a privateer being killed or captured, several seizures would often be enough to make him wealthy. Up until the middle of the nineteenth century, privateering was looked upon as a legitimate albeit risky business. George Washington, 26