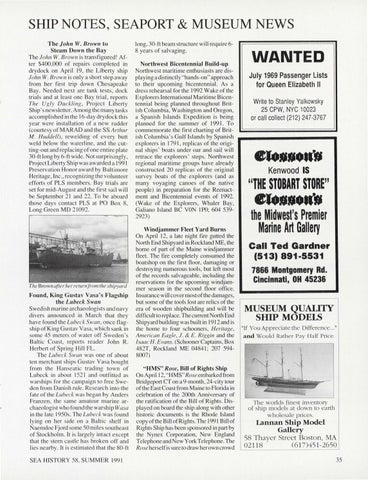 Steam Down the Bay The John W. Brown is transfi g ured! After $400,000 of repairs completed in drydock on April 19, the Libe rty ship John W. Brown is onl y a short ste p away from her first trip dow n Chesapeake Bay. Needed next are tank tests , dock tri als and at least one Bay tria l, reports The Ug ly Duckling , Proj ect Libe rty Ship &#39;s news letter. Among the m any tasks accomplished in the 16-day drydock thi s year were install ati on of a new rudder (courtesy of MARAD and the SS Arthur M. Huddell), rewelding of every butt weld below the waterline, and the cutting-out and repl ac ing of one entire pl ate 30-ft long by 6-ft wide. Not surp ris ingly, Project Liberty Ship was awarded a 199 1 Preservation Honor award by Balt imore Heritage, Inc. , recogni zing the vo lunteer efforts of PLS members. Bay tri als are set for mid-A ugust and the firs t sail will be September 2 1 and 22. To be aboard those days contact PLS at PO Box 8, Long Green MD 2 1092.

Northwest Bicentennial Build-up Northwest maritime enthu siasts are displaying a di stinctly &quot; hands-on&quot; approac h to the ir upcoming bicentennial. As a dress rehearsal for the 1992 Wake of the Ex plorers International Maritime Bicentenni al be ing planned thro ughout British Columbi a, Was hington and Oregon , a Spani sh Islands Expedition is being pl anned fo r the summer of 1991 . To commemorate the first charting of British Columbia &#39; s Gulf Islands by Spanish ex plorers in 179 1, replicas of the orig inal ships&#39; boats under oar and sail will retrace the expl orers&#39; steps. Northwest regional maritime groups have already constructed 20 replicas of the original survey boats of the explorers (and as many voyag ing canoes of the native people) in preparation for the Reenactment and Bicentennial events of 1992. (Wake of the Explorers, Whaler Bay, Galiano Island BC YON I PO; 604 5392923)

The Brown aj ier her return.from the shipyard

Found, King Gusta v Vasa&#39;s Flagship the Lubeck Swan Swedi sh marine archaeolog ists and navy di vers anno unced in March that they have fo und the Lubeck Swan, o nce fl agship of King G ustav Vasa, wh ich sank in some 45 meters of water off Sweden&#39; s Baltic Coast, reports reader John R. Herbert of Spring Hill FL. The Lubeck Swan was one of about ten merchant ships Gustav Vasa bought from the Han seatic trad ing tow n of Lubeck in abo ut 152 1 and outfitted as warships for the campa ign to free Sweden from Dani sh rule. Research into the fa te of the Lubeck was began by Anders Franzen, the same amateur m arine archaeolog ist who fo und the warship Wasa in the late 1950s. The Lubeck was fou nd lying on her side on a Balti c shelf in Naemdoe Fjord some 50 mil es southeast of Stoc kho lm . It is largely intact except that the stern castl e has broken off and lies nearby . It is esti mated that the 80-ft SEA HI STORY 58, SU MM ER 199 1

On April 12, a late night fire gutted the North End Shipyard in Rockl and ME, the home of part of the Maine windjammer fl eet. The fire completely consumed the boatshop on the first floor, damaging or destroying numerous tools, but left most of the records salvageable, including the reservations fo r the upcoming windjammer season in the second floor office. Insurance will cover most of the damages, but some of the tools lost are relics of the era of wooden shipbuilding and will be difficult to repl ace. The current North End Shipyard building was built in 19 12 and is the home to fo ur schooners, Heritage, American Eagle, J. &amp; E. Riggin and the Isaac H. Evans. (Schooner Captains, Box 482T , Rockland ME 04841 ; 207 5948007)

&quot; HMS&quot; Rose, Bill of Rights Ship On April 12, &quot; HMS&quot; Rose embarked from Bridgeport CT on a 9-month, 24-c ity tour of the East Coast from Maine to Florida in celebration of the 200th Anniversary of the ratification of the Bill of Rights. Displayed on board the ship along with other hi storic documents is the Rhode Island copy ofthe Bill ofRights. The 199 1 Bill of Rights Ship has been sponsored in part by the Nynex Corporation , New England Telephone and New York Telephone. The Rose herself is sure to draw herown crowd