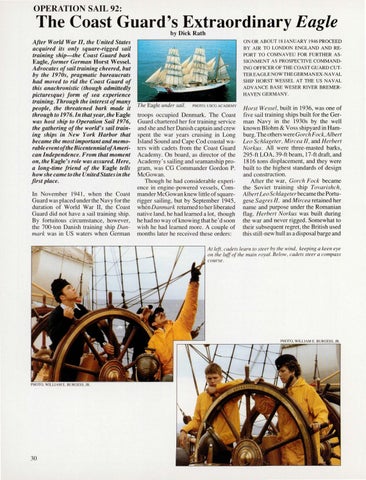 After World War II, the United States acquired its only square-rigged sail training ship-the Coast Guard bark Eagle, former German Horst Wessel. Advocates of sail training cheered, but by the 1970s, pragmatic bureaucrats had moved to rid the Coast Guard of this anachronistic (though admittedly picturesque) form of sea experience training. Through the interest of many people, the threatened bark made it through to 1976. In that year, the Eagle was host ship to Operation Sail 1976, the gathering of the world&#39;s sail training ships in New York Harbor that became the most important and memorable event ofthe Bicentennial ofAmerican Independence. From that moment on, the Eagle&#39;s role was assured. Here, a long-time friend of the Eagle tells how she came to the United States in the first place. In November 1941 , when the Coast Guard was placed under the Navy for the duration of World War II, the Coast Guard did not have a sail training ship. By fortuito us circumstance, however, the 700-ton Danish training ship Danmark was in US waters when German

ON OR A BO UT 18 JANUARY 1946 PROCEED BY AIR TO LONDON ENG LAND AND REPORT TO COMNA VEU FOR FURTHER ASSIGNMENT AS PROSPECTIVE COMMANDING OFFICER OF THE COAST GUARD CUTTER EAGLE NOWTHEGERMAN EX-NAVAL SHIP HORST WESSEL AT THE US NAVAL ADVANCE BASE WESER RIVER BREMERHA VEN GERMANY.

The Eagle under sail.

troops occupied Denmark. The Coast Guard chartered her fo r training service and she and her Dani sh captain and crew spent the war years cruising in Long Island Sound and Cape Cod coastal waters with cadets from the Coast Guard Academy . On board, as director of the Academy&#39;s sailing and seamanship program, was CG Commander Gordon P. McGowan. Though he had considerable experience in engine-powered vessels, Commander McGowan knew little of squarerigger sailing , but by September 1945 , when Danmark returned to her liberated native land, he had learned a lot, though he had no way of knowing that he &#39; d soon wish he had learned more. A couple of months later he received these orders:

fiv e sail training ships built for the German Navy in the 1930s by the well known Blohm &amp; Voss shipyard in Hamburg. The others were Gorch Fock, Albert Leo Schlageter, Mircea II, and Herbert Norkus. All were three-masted barks, 295-ft LOA, 39-ft beam, 17-ft draft, and 18 16 tons di splacement, and they were built to the highest standards of design and construction. After the war, Gorch Fock became the Soviet training ship Tovarishch, Albert Leo Schlageter became the Portugese Sag res II, and Mircea retained her name and purpose under the Romanian flag . Herbert Norkus was built during the war and never rigged . Somewhat to the ir subsequent regret, the British used this still-new hull as a disposal barge and

At left, cadets learn to steer by the wind, keeping a keen eye on the luff of the main royal. Below, cadets steer a compass