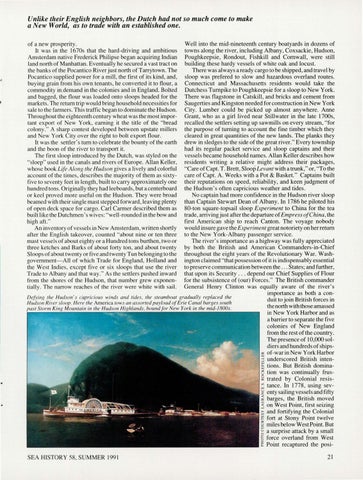 Unlike their English neighbors, the Dutch had not so much come to make a New World, as to trade with an established one. Well into the mid-nineteenth century boatyards in dozens of towns along the river, including Albany, Coxsackie, Hudson, Poughkeepsie, Rondout, Fishkill and Cornwall, were still building these hardy vessels of white oak and locust. There was always a ready cargo to be shipped, and travel by sloop was prefered to slow and hazardous overland routes . Connecticut and Massachusetts residents would take the Dutchess Turnpike to Poughkeepsie for a sloop to New York. There was flagstone in Catskill, and bricks and cement from Saugerties and Kingston needed for construction in New York City. Lumber could be picked up almost anywhere. Anne Grant, who as a girl lived near Stillwater in the late 1700s, recalled the settlers setting up sawmills on every stream, &quot;for the purpose of turning to account the fine timber which they cleared in great quantities of the new lands. The planks they drew in sledges to the side of the great river.&quot; Every township had its regular packet service and sloop captains and their vessels became household names. Allan Keller describes how residents writing a relative might address their packages, &quot;Care of Capt. T. Brett, Sloop Levant with a trunk,&quot; or, &quot;To the care of Capt. A. Weeks with a Pot &amp; Basket. &quot; Captains built their reputations on speed, reliability, and keen judgment of the Hudson&#39;s often capricious weather and tides . No captain had more confidence in the Hudson river sloop than Captain Stewart Dean of Albany . In 1786 he piloted his 80-ton square-topsail sloop Experiment to China for the tea trade, arriving just after the departure of Empress ofChina, the first American ship to reach Canton. The voyage nobody would in sure gave the Experiment great notoriety on her return to the New York-Albany passenger service. The river&#39;s importance as a highway was fully appreciated by both the British and American Commanders-in-Chief throughout the eight years of the Revolutionary War. Washington cl aimed &quot;that possession of it is indispensably essential to preserve communication between the ... States; and further, that upon its Security ... depend our Chief Supplies of Flour for the subsistence of (our) Forces.&quot; The British commander General Henry Clinton was equally aware of the river&#39;s importance as both a conDefying rhe Hudson&#39; s capricious winds and rides, rhe sreamboar gradually replaced the duit to join British forces in Hudson River sloop . Here the America tows an assorted payload of Erie Canal barges south the north with those amassed pasr Storm King Mountain in the Hudson Highlands, bound for New York in the mid-1800s. in New York Harbor and as a barrier to separate the five colonies of New England from the rest of the country. The presence of 10,000 soldiers and hundreds of ships~ of-war in New York Harbor j underscored British inten~ tions. But British domina~ tion was continually fru s~ trated by Colonial resis~ tance. In 1778 , using sev~ enty sailing vessels and fifty ~ barges, the British moved j on West Point, first seizing ;;; and fortifying the Colonial ~ fort at Stony Point twelve miles below WestPoint. But ~ a surprise attack by a small 5 force overland from West i5: Point recaptured the posiof a new prosperity. It was in the 1670s that the hard-driving and ambitious Amsterdam native Frederick Philipse began acquiring Indian land north of Manhattan. Eventually he secured a vast tract on the banks of the Pocantico River just north of Tarrytown. The Pocantico supplied power for a mill , the first of its kind , and , buying gra in from his own tenants, he converted it to flour, a commodity in.demand in the colonies and in England. Bolted and bagged, the flour was loaded onto sloops headed for the markets. The return trip would bring household necess ities for sale to the farmers. Thi s traffic began to dominate the Hudson. Throughout the eighteenth century wheat was the most important export of New York, earning it the title of the &quot;bread colony.&quot; A sharp contest developed between upstate millers and New York City over the right to bolt export flour. It was the settler &#39;s turn to celebrate the bounty of the earth and the boon of the river to transport it. The first sloop introduced by the Dutch, was styled on the &quot;sloep&quot; used in the canals and rivers of Europe. Allan Keller, whose book Life Along the Hudson gives a lively and colorful account of the times, describes the majority of them as sixtyfive to seventy feet in length, built to carry approximately one hundred tons. Originally they had leeboards, but a centerboard or keel proved more useful on the Hudson. They were broad beamed with their single mast stepped forward , leaving plenty of open deck space for cargo. Carl Carmer described them as built like the Dutchmen &#39;s wives: &quot;well-rounded in the bow and high aft.&quot; An inventory of vessels in New Amsterdam , written shortly after the English takeover, counted &quot;about nine or ten three mast vessels of about eighty or a Hundred tons burthen , two or three ketches and Barks of about forty ton , and about twenty Sloops of about twenty or five and twenty Tun belonging to the government-A ll of which Trade for England , Holland and the West Indies, except five or six sloops that use the river Trade to Albany and that way.&quot; As the settlers pushed inward from the shores of the Hudson, that number grew exponentiall y. The narrow reaches of the river were white with sa il.