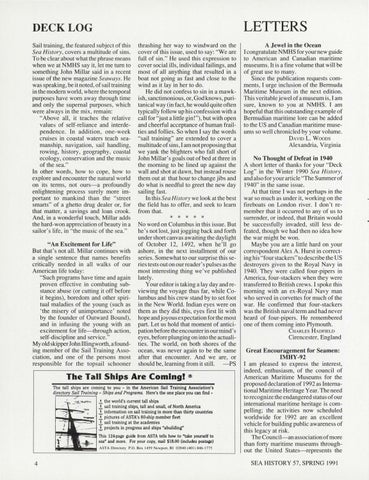 DECK LOG Sail training, the featured subject of this Sea History, covers a multitude of sins. To be clear about what the phrase means when we at NMHS say it, let me tum to something John Millar said in a recent issue of the new magazine Seaways. He was speaking, be it noted, of sail training in the modern world, where the temporal purposes have worn away through time and only the supernal purposes, which were always in the mix, remain: &quot;Above all, it teaches the relative values of self-reliance and interdependence. In addition, one-week cruises in coastal waters teach seamanship, navigation, sail handling, rowing, history, geography, coastal ecology, conservation and the music of the sea.&quot; In other words, how to cope, how to explore and encounter the natural world on its terms, not ours-a profoundly enlightening process surely more important to mankind than the &quot;street smarts&quot; of a ghetto drug dealer or, for that matter, a savings and loan crook. And, in a wonderful touch , Millar adds the hard-won appreciation of beauty in a sailor&#39;s life, in &quot;the music of the sea.&quot;

&quot;An Excitement for Life&quot; But that&#39;s not all. Millar continues with a single sentence that names benefits critically needed in all walks of our American life today: &quot;Such programs have time and again proven effective in combating substance abuse (or cutting it off before it begins), boredom and other spiritual maladies of the young (such as &#39; the misery of unimportance &#39; noted by the founder of Outward Bound), and in infusing the young with an excitement for life-through action, self-discipline and service.&quot; My old skipper John Illingworth, a founding member of the Sail Training Association, and one of the persons most responsible for the topsail schooner

thrashing her way to windward on the cover of this issue, used to say: &quot;We are full of sin.&quot; He used this expression to cover social ills, individual failings, and most of all anything that resulted in a boat not going as fast and close to the wind as it lay in her to do. He did not confess to sin in a mawkish, sanctimonious, or, God knows, puritanical way (in fact, he would quite often typically follow up his confession with a call for &quot;just a little gin!&quot;), but with open and cheerful acceptance of human frailties and follies. So when I say the words &quot;sail training&quot; are extended to cover a multitude of sins, I am not proposing that we yank the blighters who fall short of John Millar&#39;s goals out of bed at three in the morning to be lined up against the wall and shot at dawn , but instead rouse them out at that hour to change jibs and do what is needful to greet the new day sailing fast. In this Sea History we look at the best the field has to offer, and seek to learn from that.

No word on Columbus in this issue. But he&#39;s not lost, just jogging back and forth under short canvas awaiting the daylight of October 12, 1492, when he&#39;ll go ashore, in the next installment of our series. Somewhat to our surprise this series tests out on our reader&#39;s pulses as the most interesting thing we&#39;ve published lately. Your editor is taking a lay day and reviewing the voyage thus far, while Columbus and his crew stand by to set foot in the New World. Indian eyes were on them as they did this , eyes first lit with hope and joyous expectation for the most part. Let us hold that moment of anticipation before the encounter in our mind&#39; s eyes, before plunging on into the actualities. The world, on both shores of the ocean, was never again to be the same after that encounter. And we are, or should be, learning from it still. -PS

The Tall Ships Are Coming!® The tall ships are coming to you - in the American Sail Training Association&#39;s directory Sail Training - Ships and Programs. Here&#39;s the one place you can find -

A Jewel in the Ocean I congratulate NMHS for your new guide to American and Canadian maritime museums. It is a fine volume that will be of great use to many. Since the publication requests comments, I urge inclusion of the Bermuda Maritime Museum in the next edition. This veritable jewel of a museum is, I am sure, known to you at NMHS. I am hopeful that this outstanding example of Bermudian maritime lore can be added to the US and Canadian maritime museums so well chronicled by your volume. DAVID L. WooDs Alexandria, Virginia

No Thought of Defeat in 1940 A short letter of thanks for your &quot;Deck Log&quot; in the Winter 1990 Sea History, and also for your article &quot;The Summer of 1940&quot; in the same issue. At that time I was not perhaps in the war so much as under it, working on the fireboats on London river. I don&#39;t remember that it occurred to any of us to surrender, or indeed, that Britain would be successfully invaded, still less defeated , though we had then no idea how the war might be won. Maybe you are a little hard on your correspondent Alex A. Hurst in correcting hi s &quot;four stackers&quot; to describe the US destroyers given to the Royal Navy in 1940. They were called four-pipers in America, four-stackers when they were transferred to British crews. I spoke this morning with an ex-Royal Navy man who served in corvettes for much of the war. He confirmed that four-stackers was the British naval term and had never heard of four-pipers. He remembered one of them coming into Plymouth. CHARLES HADFIELD

Great Encouragement for Seamen: IMHY-92 I am pleased to express the interest, indeed, enthusiasm, of the council of American Maritime Museums for the proposed declaration of 1992 as International Maritime Heritage Year. The need to recognize the endangered status of our international maritime heritage is compelling; the activities now scheduled worldwide for 1992 are an excellent vehicle for building public awareness of this legacy at risk. The Council-an association of more than forty maritime museums throughout the United States-represents the SEA HISTORY 57, SPRING 1991