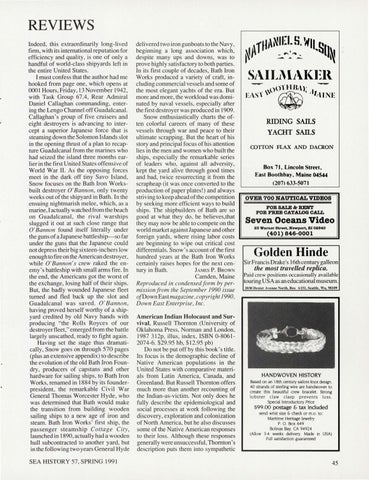 REVIEWS Indeed, this extraordinarily long-lived firm, with its international reputation for efficiency and quality, is one of only a handful of world-class shipyards left in the entire United States. I must confess that the author had me hooked from page one, which opens at 0001 Hours , Friday, 13November1942, with Task Group 67.4, Rear Admiral Daniel Callaghan commanding, entering the Len go Channel off Guadalcanal. Callaghan&#39;s group of five cruisers and eight destroyers is advancing to intercept a superior Japanese force that is steaming down the Solomon Islands slot in the opening thrust of a plan to recapture Guadalcanal from the marines who had seized the island three months earlier in the first United States offensive of World War II. As the opposing forces meet in the dark off tiny Savo Island, Snow focuses on the Bath Iron Worksbuilt destroyer O&#39; Bannon, only twenty weeks out of the shipyard in Bath. In the ensuing nightmarish melee, which, as a marine, I actual! y watched from the beach on Guadalcanal, the rival warships slugged it out at such close range that O&#39; Bannon found itself literally under the guns of a Japanese battleship-so far under the guns that the Japanese could not depress their big sixteen-inchers low enough to fire on the American destroyer, while 0 &#39; Bannon&#39; s crew raked the enemy&#39;s battleship with small arms fire . In the end, the Americans got the worst of the exchange, losing half of their ships. But, the badly wounded Japanese fleet turned and fled back up the slot and Guadalcanal was saved. O&#39; Bannon, having proved herself worthy of a shipyard credited by old Navy hands with producing &quot;the Rolls Royces of our destroyer fleet,&quot; emerged from the battle largely unscathed, ready to fight again. Having set the stage thus dramatically, Snow goes on through 570 pages (plus an extensive appendix) to describe the evolution of the old Bath Iron Foundry, producers of capstans and other hardware for sailing ships, to Bath Iron Works, renamed in 1884 by its founderpresident, the remarkable Civil War General Thomas Worcester Hyde, who was determined that Bath would make the transition from building wooden sailing ships to a new age of iron and steam. Bath Iron Works &#39; first ship, the passenger steamship Cottage City, launched in 1890, actually had a wooden hull subcontracted to another yard, but in the following two years General Hyde SEA HISTORY 57, SPRING 1991

delivered two iron gunboats to the Navy , beginning a long association which , despite many ups and downs, was to prove highly satisfactory to both parties. In its first couple of decades, Bath Iron Works produced a variety of craft, including commercial vessels and some of the most elegant yachts of the era. But more and more, the workload was dominated by naval vessels, especially after the first destroyer was produced in 1909. Snow enthusiastically charts the often colorful careers of many of these vessels through war and peace to their ultimate scrapping. But the heart of his story and principal focus of his attention lies in the men and women who built the ships, especially the remarkable series of leaders who, against all adversity, kept the yard alive through good times and bad, twice resurrecting it from the scrapheap (it was once converted to the production of paper plates!) and always striving to keep ahead of the competition by seeking more efficient ways to build ships. The shipbuilders of Bath are so good at what they do, he believes,that they may now be able to compete on the world market against Japanese and other foreign yards, where rising labor costs are beginning to wipe out critical cost differentials. Snow&#39;s account of the first hundred years at the Bath Iron Works certainly raises hopes for the next century in Bath. JAMES P. BROWN Camden, Maine Reproduced in condensed form by permission from the September 1990 issue ofDown East magazine, copyright 1990, Down East Enterprise, inc. American Indian Holocaust and Survival, Russell Thornton (University of Oklahoma Press, Norman and London, 1987 312p, illus, index, ISBN 0-80612074-6. $29.95 hb, $12.95 pb) Do not be put off by this book&#39;s title. Its focus is the demographic decline of Native American populations in the United States with comparative materials from Latin America, Canada, and Greenland. But Russell Thornton offers much more than another recounting of the Indian-as-victim. Not only does he fully describe the epidemiological and social processes at work following the discovery, exploration and colonization of North America, but he also discusses some of the Native American responses to their Joss . Although these responses generally were unsuccessful, Thornton&#39;s description puts them into sympathetic

HANDWOVEN HISTORY Based on an I 8th century sailors knot design.