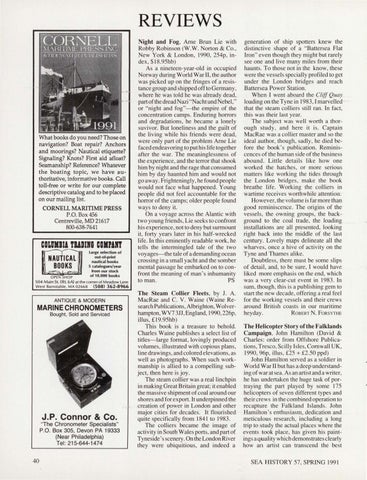 What books do you need? Those on navigation? Boat repair? Anchors and moorings? Nautical etiquette? Signaling? Knots? First aid afloat? Seamanship? Reference? Whatever the boating topic, we have authoritative, informative books. Call toll-free or write for our complete descriptive catalog and to be placed on our mailing list. CORNELL MARITIME PRESS P.O. Box456 Centreville, MD 21617

Llrge selection of out-of-print nautical books 5 catalogues/year from our stock of 10,000 books

Night and Fog, Ame Brun Lie with Robby Robinson (W.W . Norton &amp; Co. , New York &amp; London, 1990, 254p, index, $ l 8.95hb) As a nineteen-year-old in occupied Norway during World War II, the author was picked up on the fringes of a resistance group and shipped off to Germany, where he was told he was already dead, partofthedreadNazi &quot;NachtundNebel ,&quot; or &quot; night and fog&quot;-the empire of the concentration camps. Enduring horrors and degradations, he became a lonely suvivor. But loneliness and the guilt of the living while his friends were dead , were only part of the problem Ame Lie faced endeavoring to put hi s life together after the war. The meaninglessness of the experience, and the terror that shook him by night and the rage that consumed him by day haunted him and would not go away. Frighteningly, he found people would not face what happened. Young people did not feel accountable for the horror of the camps; older people found ways to deny it. On a voyage across the Alantic with two young friends, Lie seeks to confront his experience, not to deny but surmount it, forty years later in hi s half-wrecked life. In this eminently readable work , he tells the intermingled tale of the two voyages-the tale of a demanding ocean crossing in a small yacht and the somber mental passage he embarked on to confront the meaning of man&#39;s inhumanity PS to man. The Steam Collier Fleets, by J. A. MacRae and C. V. Waine (Waine Research Publications, Albrighton, Wolverhampton, WV7 3JJ, England, 1990, 226p, illus, £19.95hb) This book is a treasure to behold. Charles Waine publishes a select list of titles-large format, lovingly produced volumes, illustrated with copious plans, line drawings, and colored elevations, as well as photographs. When such workmanship is allied to a compelling subject, then here is joy. The steam collier was a real linchpin in making Great Britain great; it enabled the massive shipment of coal around our shores and for ex port. It underpinned the creation of power in London and other major cities for decades. It flourished quite specifically from 1841 to 1983. The colliers became the image of activity in South Wales ports, and part of Tyneside&#39;s scenery. On the London River they were ubiquitious, and indeed a

generation of ship spotters knew the distinctive shape of a &quot;Battersea Flat Iron&quot; even though they might but rarely see one and live many miles from their haunts. To those not in the know, these were the vessels specially profiled to get under the London bridges and reach Battersea Power Station. When I went aboard the Cliff Quay loading on the Tyne in 1983, I marvelled that the steam colliers still ran . In fact, this was their last year. The subject was well worth a thorough study , and here it is. Captain MacRae was a collier master and so the ideal author, though, sadly , he died before the book &#39;s publication. Reminiscences of the human side of the bu si ness abound. Little detail s like how one worked the hatches, or more serious matters like working the tides through the London bridges, make the book breathe life. Working the colliers in wartime receives worthwhile attention. However, the volume is far more than good reminiscence. The origins of the vessels, the owning groups, the background to the coal trade, the loading installations are all presented, looking right back into the middle of the last century. Lovely maps delineate all the wharves, once a hive of activity on the Tyne and Thames alike. Doubtless, there must be some slips of detail, and, to be sure, I would have liked more emphasis on the end, which was a very clear-cut event in 1983. In sum, though, this is a publishing gem to start the new decade, offering a real feel for the working vessels and their crews around British coasts in our maritime ROBERT N. FORSYTHE heyday . The Helicopter Story of the Falklands Campaign, John Hamilton (David &amp; Charles: order from Offshore Publications, Tresco, Scilly Isles, Cornwall UK, 1990, 96p, illus, £25 + £2.50 ppd) John Hamilton served as a soldier in World War II but has a deep understanding of war at sea. As an artist and a writer, he has undertaken the huge task of portraying the part played by some 175 helicopters of seven different types and their crews in the combined operation to recapture the Falkland Islands. John Hamilton &#39;s enthusiasm , dedication and meticulous research, including a long trip to study the actual places where the events 1took place, has given his paintings aq1uality which demonstrates clearly how an artist can transcend the best SEA HISTORY 57, SPRING 1991