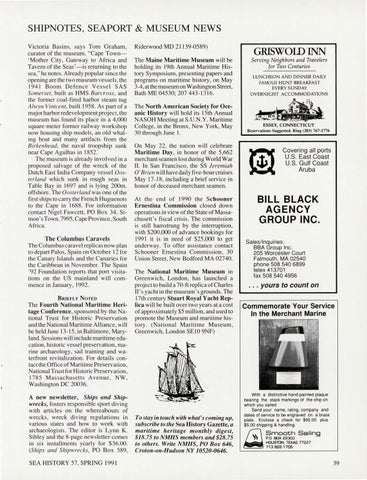 SHIPNOTES, SEAPORT &amp; MUSEUM NEWS Victoria Basins, says Tom Graham, curator of the museum. &quot;Cape Town&#39; Mother City, Gateway to Africa and Tavern of the Seas&#39; -is returning to the sea,&quot; he notes. Already popular since the opening are the two museum vessels, the 1941 Boom Defence Vessel SAS Somerset, built as HMS Barcross, and the former coal-fired harbor steam tug Alwyn Vintcent, built 1958. As part of a major harbor redevelopment project, the museum has found its place in a 4,000 square-meter former railway workshop now housing ship model s, an old whaling boat and many artifacts from the Birkenhead, the naval troopship sunk near Cape Agulhas in 1852. The museum is already involved in a proposed salvage of the wreck of the Dutch East India Company vessel Doster/and which sunk in rough seas in Table Bay in 1697 and is lying 200m. offshore. The Doster/and was one of the first ships to carry the French Huguenots to the Cape in 1688. For information qmtact Nigel Fawcett, PO Box 34, Simon&#39;s Town, 7995, Cape Province, South Africa. The Columbus Caravels The Columbus caravel replicas now plan to depart Palos, Spain on October 12 for the Canary Islands and the Canaries for the Caribbean in November. The Spain &#39;92 Foundation reports that port visitations on the US mainland will commence in January, 1992. BRIEFLY NOTED

Riderwood MD 2 11 39-0589) The Maine Maritime Museum will be holding its 19th Annual Maritime History Symposi um, presenting papers and programs on maritime history , on May 3-4, at the museum on Washington Street, Bath ME 04530; 207 443-1316. The North American Society for Oceanic History will hold its 15th Annual NASOH Meeting atS.U.N.Y. Maritime College, in the Bronx, New York, May 30 through June I. On May 22, the nation wi ll celebrate Maritime Day, in honor of the 5,662 merchant seamen lost during World War II. In San Francisco, the SS Jeremiah D&#39; Brien wi ll havedailyfive-hourcruises May 17-18, including a brief service in honor of deceased merchant seamen. At the end of 1990 the Sc hooner Ernestina Commission closed down operations in view of the State of Massachusett&#39;s fiscal crisis. The commission is still hamstrung by the interruption, with $200,000 of advance bookings for 1991 it is in need of $25,000 to get underway . To offer assistance contact Schooner Ernestina Commi ssion, 30 Union Street, New Bedford MA 02740. The National Maritime Museum in Greenwich, London, has launched a projectto build a 70-ft replica of Charles II &#39;s yacht in the museum &#39;s grounds. The 17th century Stuart Royal Yacht Replica wi ll be built over two years at a cost of approximately $5 million , and used to promote the Museum and maritime history. (National Maritime Museum, Greenwich, London SEIO 9NF)

... yours to count on Commemorate Your Service In the Merchant Marine

With a distinctive hand-painted plaque bearing the stack markings of the ship on which you sai led . Send your name , rating, company and dates of service to be engraved on a brass plate. Enclose a check for $95.00 plus $5.00 shipping &amp; handling.