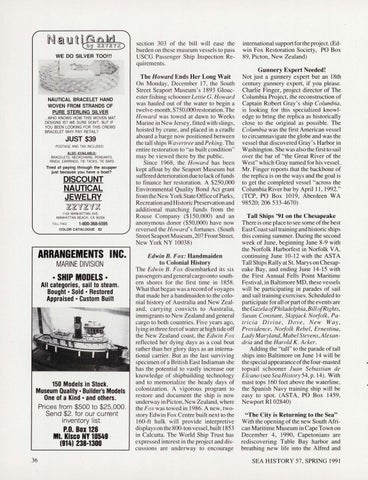 section 303 of the bill will ease the burden on these museum vessels to pass USCG Passenger Ship Inspection Requirements.

The Howard Ends Her Long Wait

Not just a gunnery expert but an 18th century gunnery expert, if you please. Charlie Finger, project director of The Columbia Project, the reconstruction of Captain Robert Gray &#39; s ship Columbia, is looking for this specialized knowledge to bring the replica as historically close to the original as possible. The Columbia was the first American vessel to circumnavigate the globe and was the vessel that discovered Gray&#39;s Harbor in Washington. She was also the first to sail over the bar of &quot;the Great River of the West&quot; which Gray named for hi s vessel. Mr. Finger reports that the backbone of the replica is on the ways and the goal is to get the completed vessel &quot;across the Columbia River bar by April 11 , 1992.&quot; (TCP, PO Box 1019, Aberdeen WA 98520; 206 533-4670)

NAUTICAL BRACELET HAND WOVEN FROM STRANDS OF PURE STERLING SILVER .. .WHO KNOWS HOW THIS WOVEN MAT DESIGNS JS? WE SURE DON&#39;T, BUT IF YOU BEEN LOOKING FOR THIS CREWS BRACELET WHY PAY RETAIL?

Tired of paying through the scupper just because you have a boat?

On Monday, December 17, the South Street Seaport Museum &#39;s 1893 Gloucester fishing schooner Lettie G. Howard was hauled out of the water to begin a twelve-month, $750,000 restoration. The Howard was towed at dawn to Weeks Marine in New Jersey, fitted with slings, hoisted by crane, and placed in a cradle aboard a barge now positioned between the tall ships Wavertree and Peking. The entire restoration to &quot;as built condition&quot; may be viewed there by the public. Since 1968, the Howard has been kept afloat by the Seaport Museum but suffered deterioration due to lack of funds to finance her restoration. A $250,000 Environmental Quality Bond Act grant from the New York State Office of Parks, Recreation and Historic Preservation and additional matching funds from the Rouse Company ($150,000) and an anonymous donor ($50,000) have now reversed the Howard&#39;s fortunes. (South Street Seaport Museum, 207 Front Street, New York NY 10038)

Edwin B. Fox: Handmaiden to Colonial History The Edwin B. Fox disembarked its six passengers and general cargo onto southern shores for the first time in 1858. What that began was a record of voyages that made her a handmaiden to the colonial history of Australia and New Zealand, carrying convicts to Australia, immigrants to New Zealand and general cargo to both countries. Five years ago, lying in three feet of water at hi gh tide off the New Zealand coast, the Edwin Fox reflected her dying days as a coal boat rather than her glory days as an international carrier. But as the last surviving specimen of a British East Indiaman she has the potential to vastly increase our knowledge of shipbui lding technology and to memorialize the heady days of colonization. A vigorous program to restore and document the ship is now underway in Picton, New Zealand, where the Fox was towed in 1986. A new, twostory Edwin Fox Centre built next to the 160-ft hulk will provide interpretive displays on the 800-ton vessel , built 1853 in Calcutta. The World Ship Trust has expressed interest in the project and discussions are underway to encourage

Tall Ships &#39;91 on the Chesapeake There is one place to see some of the best East Coast sail training and historic ships this coming summer. During the second week of June, beginning June 8-9 with the Norfolk Harborfest in Norfolk VA , contin uing June 10-12 with the ASTA Tall Ships Rally at St. Marys on Chesapeake Bay, and ending June 14-15 with the First Annual Fells Point Maritime Festival, in Baltimore MD, these vessels will be participating in parades of sai l and sail training exercises. Scheduled to participate for al I or part of the events are the Gaze/a ofPhiladelphia , Bill ofRights, Susan Constant, Skipjack NOJjolk, Patricia Divine, Dove, New Way, Providence, NOJjolk Rebel, Ernestina, Lady Maryland, Mabel Stevens,Alexandria and the Harold K. Acker. Adding the &quot;tall&quot; to the parade of tall ships into Baltimore on June 14 will be the special appearance of the four-masted topsail schooner Juan Sebastian de Elcano(seeSeaHistory54,p.14). With mast tops 160 feet above the waterline, the Spanish Navy training ship will be easy to spot. (ASTA, PO Box 1459, Newport RI 02840)

&quot;The City is Returning to the Sea&quot; With the opening of the new South African Maritime Museum in Cape Town on December 4 , 1990, Capetonians are rediscovering Table Bay harbor and breathing n1e w life into the Alfred and SEA HISTORY 57, SPRING 1991