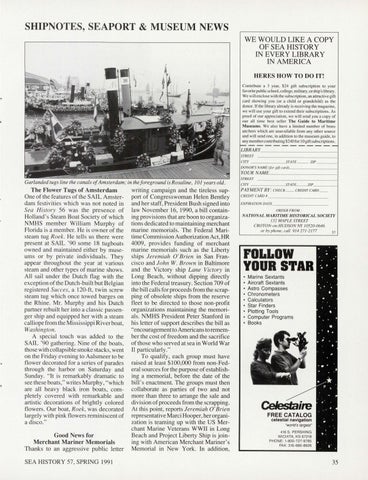 SHIPNOTES, SEAPORT &amp; MUSEUM NEWS WE WOULD LIKE A COPY OF SEA HISTORY IN EVERY LIBRARY IN AMERICA HERES HOW TO DO IT! Contribute a 3 year, $24 gift subscription to yo ur favo rite public school , college, military, or ship&#39;s library. We wi ll enclose with the subscripti on, an attractive gift card showing you (or a child or gra ndchild) as the donor. If the library already is receiving the magazine, we will use your gift to extend the ir subscriptions. As proof of our apprec iation, we wi ll send yo u a copy of our all time best seller The Guide to Maritime Museums. We also have a limited number of brass anchors which are unavailable from any other source and will send one, in addition to the museum guide, to any member contributing $240 for 10 gift subscriptions. ~-----------

Garlanded tugs line the canals ofAmsterdam; in the foreground is Rosaline, 101 years old.

The Flower Tugs of Amsterdam One of the features ofihe SAIL Amsterdam festivities which was not noted in Sea History 56 was the presence of Holland &#39;s Steam Boat Society of which NMHS member William Murphy of Florida is a member. He is owner of the steam tug Roek. He tells us there were present at SAIL &#39;90 some 18 tugboats owned and maintained either by museums or by private individuals. They appear throughout the year at various steam and other types of marine shows. All sail under the Dutch flag with the exception of the Dutch-built but Belgian registered Succes, a 120-ft, twin screw steam tug which once towed barges on the Rhine. Mr. Murphy and his Dutch partner rebuilt her into a classic passenger ship and equipped her with a steam calliope from the Mississippi River boat, Washington. A special touch was added to the SAIL &#39;90 gathering. Nine of the boats, those with collapsible smoke stacks, went on the Friday evening to Aalsmeer to be flower decorated for a series of parades through the harbor on Saturday and Sunday. &quot;It is remarkably dramatic to see these boats,&quot; writes Murphy, &quot;which are all heavy black iron boats, completely covered with remarkable and artistic decorations of brightly colored flowers. Our boat, Roek, was decorated largely with pink flowers reminiscent of a disco. &quot; Good News for Merchant Mariner Memorials Thanks to an aggressive public letter SEA HISTORY 57, SPRING 1991

writing campaign and the tireless support of Congresswoman Helen Bentley and her staff, President Bush signed into law November 16, 1990, a bill containing provisions that are boon to organizations dedicated to maintaining merchant marine memorials. The Federal Maritime Commission Authorization Act, HR 4009, prov ides funding of merchant marine memorials such as the Liberty ships Jeremiah O&#39;Brien in San Francisco and John W. Brown in Baltimore and the Victory ship Lane Victory in Long Beach, without dipping directly into the Federal treasury. Section 709 of the bill calls for proceeds from the scrapping of obsolete ships from the reserve fleet to be directed to those non-profit organizations maintaining the memorials . NMHS President Peter Stanford in his letter of support describes the bill as &quot;encouragement to Americans to remember the cost of freedom and the sacrifice of those who served at sea in World War II particularly.&quot; To qualify, each group must have raised at least $ 100,000 from non-Federal sources for the purpose of establishing a memorial, before the date of the bill &#39;s enactment. The groups must then collaborate as parties of two and not more than three to arrange the sale and division of proceeds from the scrapping. At this point, reports Jeremiah 0 &#39; Brien representative Marci Hooper, her organization is teaming up with the US Merchant Marine Veterans WWII in Long Beach and Project Liberty Ship is joining with American Merchant Mariner&#39;s Memorial in New York. In addition,