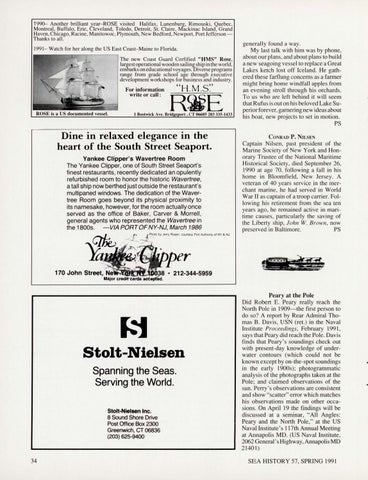 For information writeor call : ROSE is a US documented vessel.

Dine in relaxed elegance in the heart of the South Street Seaport. Yankee Clipper&#39;s Wavertree Room The Yankee Clipper, one of South Street Seaport&#39;s finest restaurants , recently dedicated an opulently refurbished room to honor the historic Wavertree, a tall ship now berthed just outside the restaurant&#39;s multipaned windows. The dedication of the Wavertree Room goes beyond its physical proximity to its namesake, however, for the room actually once served as the office of Baker, Carver &amp; Morrell , general agents who represented the Wavertree in the 1800s. -VIA PORT OF NY-NJ, March 1986

generally found a way. My last talk with him was by phone, about our plans, and about plans to bui ld a new seagoing vessel to replace a Great Lakes ketch lost off Iceland. He gathered these farflung concerns as a farmer might bring home windfall apples from an evening stroll through his orchards. To us who are left behind it will seem that Rufus is out on his beloved Lake Superior forever, garnering new ideas about his boat, new projects to set in motion. PS CONRAD

Captain Nilsen , past president of the Marine Society of New York and Honorary Trustee of the National Maritime Historical Society, died September 26, l 990 at age 70, followi ng a fall in his home in Bloomfield, New Jersey. A veteran of 40 years service in the merchant marine, he had served in World War II as captain of a troop carrier. Following his retirement from the sea ten years ago, he remained active in maritime causes, particularly the saving of the Liberty ship, John W. Brown, now preserved in Baltimore. PS

Peary at the Pole

Did Robert E. Peary reall y reach the North Pole in 1909-the first person to do so? A report by Rear Admiral Thomas B. Davis, USN (ret.) in the Naval Institute Proceedings, February 199 1, says that Peary did reach the Pole. Davis finds that Peary &#39;s soundi ngs check out with present-day knowledge of underwater contours (which could not be known except by on-the-spot soundings in the early 1900s); photogrammatic analysis of the photographs taken at the Pole; and claimed observations of the sun. Perry&#39;s observations are consistent and show &quot;scatter&quot; error which matches his observations made on other occasions. On April 19 the fi ndings will be discussed at a seminar, &quot;All Angles: Peary and the North Pole,&quot; at the US Naval Institute&#39;s l 17th Annual Meeting at Annapolis MD. (US Naval Institute, 2062 General &#39;s Highway, Annapoli s MD 21401) SEA HISTORY 57, SPRING 199 1