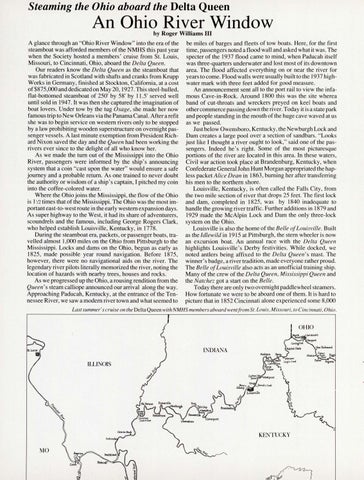 Steaming the Ohio aboard the Delta Queen

A glance through an &quot;Ohio River Window&quot; into the era of the steamboat was afforded members of the NMHS thi s past year when the Society hosted a members &#39; &#39;cruise from St. Louis, Missouri, to Cincinnati, Ohio, aboard the Delta Queen. Our readers know the Delta Queen as the steamboat that was fabricated in Scotland with shafts and cranks from Krupp Works in Germany, finished at Stockton, California, at a cost of$875,000 and dedicated on May 20, 1927. This steel-hulled, flat-bottomed steamboat of 250&#39; by 58&#39; by 11.5&#39; served well until sold in 1947. It was then she captured the imagination of boat lovers. Under tow by the tug Osage, she made her now famous trip to New Orleans via the Panama Canal. After a refit she was to begin service on western rivers only to be stopped by a law prohibiting wooden superstructure on overnight passenger vessels. A last minute exemption from President Richard Nixon saved the day and the Queen had been working the rivers ever since to the delight of all who know her. As we made the tum out of the Mississippi into the Ohio River, passengers were informed by the ship &#39;s announcing system that a coin &quot;cast upon the water&quot; would ensure a safe journey and a probable return. As one trained to never doubt the authority or wisdom of a ship&#39;s captain, I pitched my coin into the coffee-colored water. Where the Ohio joins the Mississippi , the flow of the Ohio is I &#39;/2 times that of the Mississippi. The Ohio was the most important east-to-west route in the early western expansion days. As super highway to the West, it had its share of adventurers, scoundrels and the famous , including George Rogers Clark, who helped establish Louisville, Kentucky, in 1778. During the steamboat era, packets, or passenger boats, travelled almost 1,000 miles on the Ohio from Pittsburgh to the Mississippi. Locks and dams on the Ohio, begun as early as 1825, made possible year round navigation. Before 1875, however, there were no navigational aids on the river. The legendary river pilots literally memorized the river, noting the location of hazards with nearby trees, houses and rocks. As we progressed up the Ohio, a rousing rendition from the Queen&#39;s steam calliope announced our arrival along the way. Approaching Paducah, Kentucky, at the entrance of the Tennessee River, we saw a modem river town and what seemed to

be miles of barges and fleets of tow boats. Here, for the first time, passengers noted a flood wall and asked what it was. The specter of the 1937 flood came to mind , when Paducah itself was three-quarters underwater and lost most of its downtown area. The flood affected everything on or near the river for years to come. Flood walls were usually built to the 1937 highwater mark with three feet added for good measure. An announcement sent all to the port rail to view the infamous Cave-in-Rock. Around 1800 this was the site wherea band of cut-throats and wreckers preyed on keel boats and other commerce passing down the river. Today it is a state park and people standing in the mouth of the huge cave waved at us as we passed. Just below Owensboro, Kentucky, the Newburgh Lock and Dam creates a large pool over a section of sandbars. &quot;Looks just like I thought a river ought to look,&quot; said one of the passengers. Indeed he &#39; s right. Some of the most picturesque portions of the river are located in this area. In these waters, Civil war action took place at Brandenburg, Kentucky, when Confederate General John Hunt Morgan appropriated the hapless packet Alice Dean in 1863, burning her after transferring his men to the northern shore. Louisville, Kentucky, is often called the Falls City, from the two mile section of river that drops 25 feet. The first lock and dam , completed in 1825, was by 1840 inadequate to handle the growing river traffic. Further additions in 1879 and 1929 made the McAlpin Lock and Dam the only three-lock system on the Ohio. Louisville is also the home of the Belle of Louisville. Built as the ldlewild in 1915 at Pittsburgh, the stem wheeler is now an excursion boat. An annual race with the Delta Queen highlights Louisville &#39;s Derby festivities . While docked, we noted antlers being affixed to the Delta Queen &#39; s mast. The winner&#39; s badge, a river tradition, made everyone rather proud. The Belle of Louisville also acts as an unofficial training ship. Many of the crew of the Delta Queen, Mississippi Queen and the Natche z got a start on the Belle. Today there are only two overnight paddlewheel steamers. How fortunate we were to be aboard one of them. It is hard to picture that in 1852 Cincinnati alone experienced some 8,000