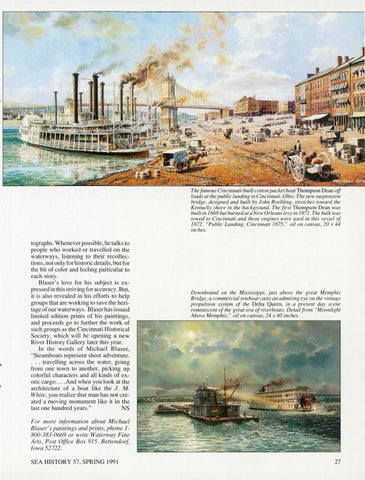 The famous Cincinnati-built cotton packet boat Thompson Dean off loads at the public landing in Cincinnati, Ohio. The new suspension bridge, designed and built by John Roehling, stretches toward the Kentucky shore in the background. The first Thompson Dean was built in 1868 but burned at a New Orleans levy in 1871. The hulk was towed to Cincinnati and those engines were used in this vessel of 1872. &quot;Public Landing, Cincinnati 1875,&quot; oil on canvas, 20 x 44 inches.

tographs. Whenever possible, he talks to people who worked or travelled on the waterways, li stening to their recollections, not only for historic details, but for the bit of color and feeling particular to each story . Blaser&#39;s love for his subject is expressed in thi s striving for accuracy. But, it is also revealed in his efforts to help groups that are working to save the heritage of our waterways. Blaser has issued limited edition prints of his paintings, and proceeds go to further the work of such groups as the Cincinnati Historical Society, which will be opening a new River Hi story Gallery later this year. In the words of Michael Blaser, &quot;Steamboats represent sheer adventure . . . . travelling across the water, going from one town to another, picking up colorful characters and all kinds of exotic cargo .... And when you look at the architecture of a boat like the J. M . White, you realize that man has not created a moving monument like it in the last one hundred years.&quot; NS

Downbound on the Mississippi, just above the great Memphis Bridge, a commercial towboat casts an admiring eye on the vintage propulsion system of the Delta Queen, in a present day scene reminiscent of the great era of riverboats. Detail from &quot;Moonlight Above Memphis ,&quot; oil on canvas, 24 x 40 inches.