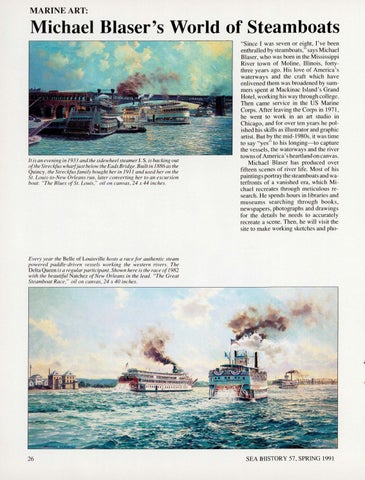 It is an evening in 1933 and the sidewheel steamer J. S. is backing out of the Streckfus wharfj ust below the Eads Bridge. Built in 1886 as the Quincy, the Streck/us fam ily bought her in 1911 and used her on the St. Louis-to-New Orleans run, later converting her to an excursion boat. &quot;The Blues of St. Louis,&quot; oil on canvas, 24 x 44 inches.

&quot;Since I was seven or eight, I&#39;ve been enthralled by steamboats,&quot; says Michael Blaser, who was born in the Mississippi River town of Moline, Illinois, forty three years ago. His love of America &#39;s waterways and the craft which have enlivened them was broadened by summers spent at Mackinac Island &#39;s Grand Hotel, working his way through college. Then came service in the US Marine Corps. After leaving the Corps in 197 1, he went to work in an art studio in Chicago, and for over ten years he polished his skills as illustrator and graphic artist. But by the mid- l 980s, it was time to say &quot;yes&quot; to his longing- to capture the vessels, the waterways and the river towns of America&#39;s heartland on canvas. Michael Blaser has produced over fifteen scenes of river life. Most of his paintings portray the steamboats and waterfronts of a vanished era, which Michael recreates through meticu lous research. He spends hours in libraries and museums searching through books , newspapers, photographs and drawings for the details he needs to accurately recreate a scene. Then , he will visit the site to make working sketches and pho-

Every year the Belle of Louisv ille hosts a race f or authentic steam powered paddle-driven vessels working the western rivers. The Delta Queen is a regular participant. Shown here is the race of 1982 with the beautiful Natchez of New Orleans in the lead. &quot;The Great Steamboat Race,&quot; oil on canvas, 24 x 40 inches.