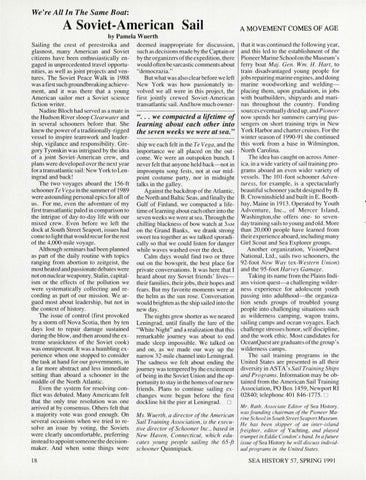 A Soviet-American Sail by Pamela Wuerth Sailing the crest of perestroika and deemed inappropriate for di scussion, glasnost, many American and Soviet such as decisions made by the Captain or citizens have been enthusiastically en- by the organizers of the expedition, there gaged in unprecedented travel opportu- would often be sarcastic comments about nities, as well as joint projects and ven- &quot;democrazia.&quot; But what was also clear before we left tures. The Soviet Peace Walk in 1988 was a first such groundbreaking achieve- New York was how passionately inment, and it was there that a young volved we all were in this project, the American sailor met a Soviet sc ience first jointly crewed Soviet-American fiction writer. transatlantic sail. And how much ownerNadine Bloch had served as a mate in the Hudson River sloop Clearwater and &quot; ... we compacted a lifetime of in several schooners before that. She learning about each other into knew the powerof a traditionally-rigged the seven weeks we were at sea.&quot; vessel to inspire teamwork and leadership, vigilance and responsibility. Gre- ship we each felt in the Te Vega, and the gory Tyomkin was intrigued by the idea importance we all placed on the outof a joint Soviet-American crew, and come. We were an outspoken bunch. I plans were developed over the next year never felt that anyone held back-not in for a transatlantic sail: New York to Len- impromptu song fests, not at our midingrad and back! point costume party, nor in midnight The two voyages aboard the 156-ft talks in the gall ey. schooner Te Vega in the summerof 1989 Against the backdrop of the Atlantic, were astounding personal epics for all of the North and Baltic Seas, and finally the us . For me, even the adventure of my Gulf of Finland, we compacted a lifefirst transatlantic paled in comparison to time ofleaming about each other into the the intrigue of day-to-day life with our seven weeks we were at sea. Through the mixed crew. Even before we left the chilling blackness of bow watch at 3AM dock at South Street Seaport, issues had on the Grand Banks, we drank strong come to light that would recur for the rest sweet tea together as we talked sporadiof the 4 ,000-mile voyage. cally so that we could listen for danger Although seminars had been planned while waves washed over the deck . as part of the daily routine with topics Calm days would find two or three ranging from abortion to zeitgeist, the out on the bowsprit, the best place for most heated and passionate debates were private conversations. It was here that I not on nuclear weaponry, Stal in , capital- heard about my Soviet friends&#39; livesism or the effects of the pollution we their families, their jobs, their hopes and were systematically collecting and re- fears. But my favorite moments were at cording as part of our mission. We ar- the helm as the sun rose. Conversation gued most about leadership, but not in would brighten as the ship sailed into the the context of history. new day. The issue of control (first provoked The nights grew shorter as we neared by a storm off Nova Scotia, then by ten Leningrad, until finally the lure of the days lost to repair damage sustained &quot;White Night&quot; and a realization that this during the blow, and then around the ex- remarkable journey was about to end treme seasickness of the Soviet cook) made sleep impossible. We talked on was omnipresent. It was a humbling ex- and on, as we made our way up the perience when one stopped to consider narrow 32-mile channel into Leningrad. the task at hand for our governments, in The sadness we fe lt about ending the a far more abstract and less immediate journey was tempered by the excitement setting than aboard a schooner in the of being in the Soviet Union and the opmiddle of the North Atlantic. portunity to stay in the homes of our new Even the system for resolving con- friends. Plans to continue sailing exflict was debated. Many Americans felt changes were begun before the first that the only true resolution was one dockline hit the pier at Leningrad. D arrived at by consensus. Others felt that a majority vote was good enough. On Ms. Wuerth , a director of the American several occasions when we tried to re- Sail Training Association, is the execusolve an issue by voting, the Soviets tive director of Schooner Inc., based in were clearly uncomfortable, preferring New Haven, Connecticut, which eduinstead to appoint someone the decision- cates young people sailing the 65-ft maker. And when some things were schooner Quinnipiack. 18

A MOVEMENT COMES OF AGE that it was continued the following year, and thi s led to the establishment of the Pioneer Marine School on the Museum &#39;s ferry boat Maj. Gen. Wm . H. Hart, to train di sadvantaged young people for jobs repairing marine engines, and doing marine woodworking and weldingplacing them , upon graduation , in jobs with boatbuilders, shipyards and mari nas throughout the country. Funding sources eventually dri ed up, and Pioneer now spends her summers carrying passengers on short training trips in New York Harbor and charter cruises. For the winter season of 1990-9 1 she continued thi s work from a base in Wilmington , North Carolina. The idea has caught on across America, in a wide variety of sail training programs aboard an even wider variety of vessels. The 10 I -foot schooner Adventuress, for examp le, is a spectacularly beautiful schooner yacht designed by B. B. Crowninshield and built in E. Boothbay, Maine in 1913. Operated by Youth Adventure, Inc. , of Mercer I s land , Washington ,she offers one- to sevenday training sail s to young and old. More than 20,000 people have learned from their experience aboard, including many Girl Scout and Sea Explorer groups. Another organization, YisionQuest National , Ltd., sail s two schooners, the 92-foot New Way (ex-Western Union) and the 95-foot Harvey Gamage. Taking its name from the Plains Indi ans vision quest-a challenging wilderness experience for ado lescent youth pass ing into adulthood-the organization sends groups of troubled yo ung people into challenging situations such as wilderness camping, wagon trains , sailing camps and ocean voyages. Each challenge stresses honor, self di scipline, and the work ethic. Most candidates for Ocean Quest are graduates of the group&#39;s wilderness camps. The sail training programs in the United States are presented in all their diversity in AST A&#39;s Sail Training Ships and Programs. Information may be obtained from the American Sail Training Association , PO Box 1459, Newport RI 02840; telephone 401 846-1775. D Mr. Rath , Associate Editor of Sea History , was founding chairman of the Pioneer Marine School in South Street Seaport Museum. He has been skipper of an inter-island freighter, editor of Yachting, and played trumpet in Eddie Condon&#39; s band. In a future issue of Sea History he will discuss individual programs in the United States.