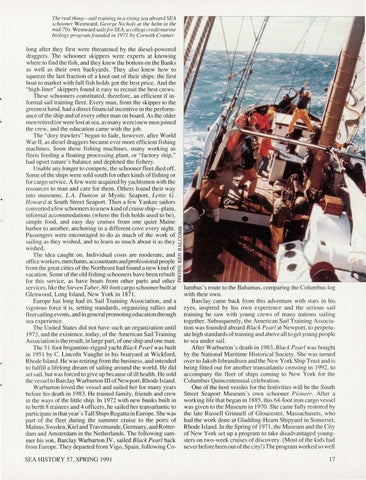 The real thing-sail training in a rising sea aboard SEA schooner Westward , George Nichols at the helm in the mid-70s. Westward sails/or SEA , a college credit marine biology program founded in 1971 by Co1with Cramer.

long after they first were threatened by the diesel-powered draggers. The schooner skippers were experts at knowing where to find the fish , and they knew the bottom on the Banks as well as their own backyards. They also knew how to squeeze the last fraction of a knot out of their ships: the first boat to market with full fi sh ho lds got the best price. And the &quot;high-liner&quot; skippers found it easy to recruit the best crews. These schooners constituted, therefore, an efficient if informal sai l training fleet. Every man , from the skipper to the greenest hand , had a direct financial incentive in the performance of the ship and of every other man on board. As the older men retired (or were lost at sea, as many were) new men joined the crew, and the education came with the job. The &quot;dory trawlers&quot; began to fade, however, after World War II, as diesel draggers became ever more efficient fishing machines. Soon these fishing machines, many working as fleets feeding a floating processing plant, or &quot;factory ship,&quot; had upset nature &#39;s balance and depleted the fishery. Unable any longer to compete, the schooner fleet died off. Some of the ships were sold south for other kinds of fishing or for cargo serv ice. A few were acquired by yachtsmen with the resources to man and care for them. Others found their way into museums, L.A. Dunton at Mystic Seaport, Lettie G. Howard at South Street Seaport. Then a few Yankee sailors converted a few schooners toa new kind of cruise ship--plain, informal accommodations (where the fish holds used to be) , simple food , and easy day cruises from one quiet Maine harbor to another, anchoring in a different cove every night. ~ Passengers were encouraged to do as much of the work of o sai ling as they wished, and to learn as much about it as they ~ wished. ~ The idea caught on. Individual costs are moderate, and ~ office workers, merchants, accountants and professional people ~ from the great cities of the Northeast had found a new kind of ~ vacation. Some of the old fishing schooners have been rebuilt o for this service, as have boats from other parts and other iE services, like the Steven Taber, 80-foot cargo schooner built at Glenwood, Long Island , New York in 187 l. Europe has long had its Sail Training Association , and a vigorous force it is , setting standards, organizing rallies and fleet sailingevents,andingeneralpromotingeducationthrough sea experience. The United States did not have such an organization until 1973, and the existence, today, of the American Sail Training Association is the result, in large part, of one ship and one man . The 51 -foot brigantine-rigged yacht Black Pearl was built in 1951 by C. Lincoln Vaughn in his boatyard at Wickford, Rhode Island. He was retiring from the busi ness, and intended to fulfill a lifelong dream of sailing around the world. He did set sail, but was forced to give up because of ill health. He sold the vessel to Barclay Warburton Ill of Newport, Rhode Island. Warburton loved the vessel and sailed her for many years before his death in 1983. He trained family , friends and crew in the ways of the little ship. In 1972 with new bunks built in to berth 8 trainees and 4 officers, he sailed her transatlantic to participate in that year&#39;s Tall Ships Regatta in Europe. She was part of the fleet during the summer cruise to the ports of Malmo, Sweden, Kiel and Travemunde, Germany, and Rotterdam and Amsterdam in the Netherlands. The following summer his son, Barclay Warburton IV , sailed Black Pearl back from Europe. They departed from Vigo, Spain, following CoSEA HISTORY 57, SPRING 1991

lumbus &#39;s route to the Bahamas, comparing the Columbus log with their own. Barclay came back from this adventure with stars in his eyes, inspired by his own experience and the serious sail training he saw with young crews of many nations sailing together. Subsequently, the American Sail Training Association was founded aboard Black Pearl at Newport, to perpetuate high standards of training and above all to get young people to sea under sai l. After Warburton&#39;s death in 1983 , Black Pearl was bought by the National Maritime Historical Society. She was turned over to Jakob lsbrandtsen and the New York Ship Trust and is being fitted out for another transatlantic crossing in 1992, to accompany the fleet of ships coming to New York for the Columbus Quincentennial celebration. One of the host vessles for the festivities will be the South Street Seaport Museum&#39;s own schooner Pioneer. After a working life that began in 1885 , this 64-foot iron cargo vessel was given to the Museum in 1970. She came fully restored by the late Russell Grinnell of Gloucester, Massachusets, who had the work done at Gladding-Hearn Shipyard in Somerset, Rhode Island. In the Spring of 1971 , the Museum and the City of New York set up a program to take di sadvantaged youngsters on two-week cruises of discovery. (Most of the kid s had never before been out of the city!) The program worked so well 17