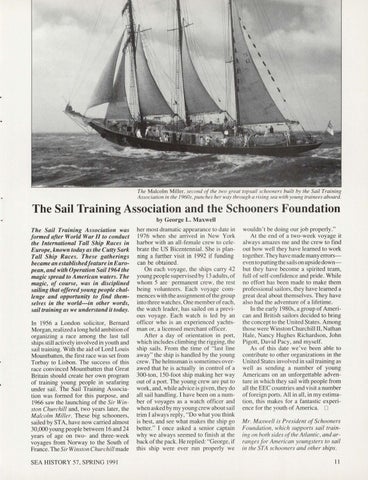 The Malcolm Miller, second of the two great topsail schooners built by the Sail Training Association in the J960s, punches her way through a rising sea with young trainees aboard.

The Sail Training Association and the Schooners Foundation by George L. Maxwell

The Sail Training Association was formed after World War II to conduct the International Tall Ship Races in Europe, known today as the Cutty Sark Tall Ship Races. These gatherings became an establishedfeature in European, and with Operation Sail 1964 the magic spread to American waters. The magic, of course, was in disciplined sailing that offered young people challenge and opportunity to find themselves in the world-in other words, sail training as we understand it today. In 1956 a London solicitor, Bernard Morgan, realized a long held ambition of organizing a race among the last tall ships still actively involved in youth and sail training. With the aid of Lord Louis Mountbatten, the first race was set from Torbay to Lisbon. The success of this race convinced Mountbatten that Great Britain should create her own program of training young people in seafaring under sail. The Sail Training Association was formed for this purpose, and 1966 saw the launching of the Sir Winston Churchill and, two years later, the Malcolm Miller. These big schooners, sailed by ST A, have now carried almost 30,000 young people between 16 and 24 years of age on two- and three-week voyages from Norway to the South of France. The Sir Winston Churchill made SEA HISTORY 57, SPRING 1991

her most dramatic appearance to date in 1976 when she arrived in New York harbor with an all-female crew to celebrate the US Bicentennial. She is planning a further visit in 1992 if funding can be obtained. On each voyage, the ships carry 42 young people supervised by 13 adults, of whom 5 are Âˇ permanent crew, the rest being volunteers. Each voyage commences with the assignment of the group into three watches. One member of each, the watch leader, has sailed on a previous voyage. Each watch is led by an officer who is an experienced yachtsman or, a licensed merchant officer. After a day of orientation in port, which includes climbing the rigging, the ship sails. From the time of &quot;last line away&quot; the ship is handled by the young crew. The helmsman is sometimes overawed that he is actually in control of a 300-ton, 150-foot ship making her way out of a port. The young crew are put to work, and, while advice is given, they do all sail handling. I have been on a number of voyages as a watch officer and when asked by my young crew about sail trim I always reply, &quot;Do what you think is best, and see what makes the ship go better.&quot; I once asked a senior captain why we always seemed to finish at the back of the pack. He replied: &quot;George, if this ship were ever run properly we

wouldn&#39;t be doing our job properly.&quot; At the end of a two-week voyage it always amazes me and the crew to find out how well they have learned to work together. They have made many errorseven to putting the sails on upside downbut they have become a spirited team, full of self-confidence and pride. While no effort has been made to make them professional sailors, they have learned a great deal about themselves. They have also had the adventure of a lifetime. In the early 1980s, a group of American and British sailors decided to bring the concept to the United States. Among those were Winston Churchill II, Nathan Hale, Nancy Hughes Richardson, John Pigott, David Pacy, and myself. As of this date we&#39;ve been able to contribute to other organizations in the United States involved in sail training as well as sending a number of young Americans on an unforgettable adventure in which they sai l with people from all the EEC countries and visit a number of foreign ports. All in all, in my estimation, this makes for a fantastic experience for the youth of America. D

Mr. Maxwell is President of Schooners Foundation, which supports sail training on both sides of the Atlantic, and arranges for American youngsters to sail in the STA schooners and other ships. 11