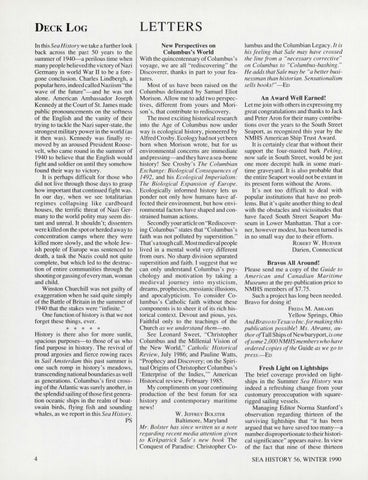 DECK LOG In this Sea History we take a further look back across the past 50 years to the summer of 1940-a perilous time when many people believed the victory of Nazi Germany in world War II to be a foregone conclusion. Charles Lindbergh, a popular hero, indeed called Nazi ism &quot;the wave of the future&quot;-and he was not alone. American Ambassador Joseph Kennedy at the Court of St. James made public pronouncements on the softness of the English and the vanity of their trying to tackle the Nazi super-state, the strongest military power in the world (as it then was) . Kennedy was finally removed by an aroused President Roosevelt, who came round in the summer of 1940 to believe that the English would fight and soldier on until they somehow found their way to victory. It is perhaps difficult for those who did not live through those days to grasp how important that continued fight was. In our day , when we see totalitarian regimes collapsing like cardboard houses, the terrific threat of Nazi Germany to the world polity may seem distant and unreal. It shouldn &#39;t; dissenters were killed on the spot or herded away to concentration camps where they were killed more slowly, and the whole Jewish people of Europe was sentenced to death, a task the Nazis could not quite complete, but which led to the destruction of entire communities through the shooting or gassing of every man, woman and child. Winston Churchill was not guilty of exaggeration when he said quite simply of the Battle of Britain in the summer of 1940 that the stakes were &quot;infinite.&quot; One function of history is that we not forget these things, ever.

History is there also for more sunlit, spacious purposes-to those of us who find purpose in history . The revival of proud argosies and fierce rowing races in Sail Amsterdam this past summer is one such romp in history&#39;s meadows, transcending national boundaries as we] I as generations. Columbus&#39;s first crossing of the Atlantic was surely another, in the splendid sailing of those first generation oceanic ships in the realm of boatswain birds, flying fish and sounding whales, as we report in this Sea History . PS

LETTERS New Perspectives on Columbus&#39;s World With the quincentennary of Columbus&#39;s voyage, we are all &quot;rediscovering&quot; the Discoverer, thanks in part to your features. Most of us have been raised on the Columbus delineated by Samuel Eliot Morison. Allow me to add two perspectives, different from yours and Morison&#39;s, that contribute to rediscovery. The most exciting hi storical research into the Age of Columbus now under way is ecological history, pioneered by Alfred Crosby. Ecology had not yet been born when Morison wrote, but for us environmental concerns are immediate and pressing-and they have a sea-borne history! See Crosby&#39;s The Columbian Exchange: Biological Consequences of 1492 , and his Ecological Imperialism: The Biological Expansion of Europe. Ecologically informed history Jets us ponder not only how humans have affected their environment, but how environmental factors have shaped and constrained human actions. Secondly your article on &quot;Rediscovering Columbus&quot; states that &quot;Columbus&#39;s faith was not polluted by superstition.&quot; That&#39;s a tough call. Most medieval people lived in a mental world very different from ours. No sharp division separated superstition and faith. I suggest that we can only understand Columbus&#39;s psychology and motivation by taking a medieval journey into mysticism, dreams, prophecies, messianic illusions, and apocalypticism. To consider Columbus&#39;s Catholic faith without these components is to sheer it of its rich historical context. Devout and pious, yes. Faithful only to the teachings of the Church as we understand them-no. See Leonard Sweet, &quot;Christopher Columbus and the Millenial Vision of the New World,&quot; Catholic Historical Review, July 1986; and Pauline Watts , &quot;Prophecy and Discovery; on the Spiritual Origins of Christopher Columbus&#39;s &#39;Enterprise of the Indies ,&quot;&#39; American Historical review, February 1985. My compliments on your continuing production of the best forum for sea history and contemporary maritime news! W. JEFFREY BOLSTER Baltimore, Maryland Mr. Bolster has since written us a note regarding recent media attention given to Kirkpatrick Sale&#39;s new book The Conquest of Paradise: Christopher Co-

lumbus and the Columbian Legacy. It is his feeling that Sale may have crossed the line from a &quot;necessary corrective&quot; on Columbus to &quot;Columbus-bashing.&quot; He adds that Sale may be &quot;a better businessman than historian. Sensationalism sells books!&quot;-Eo An Award Well Earned! Let me join with others in expressing my great congratulations and thanks to Jack and Peter Aron for their many contributions over the years to the South Street Seaport, as recognized this year by the NMHS American Ship Trust A ward. It is certainly clear that without their support the four-masted bark Peking, now safe in South Street, would be just one more decrepit hulk in some maritime graveyard. It is also probable that the entire Seaport would not be extant in its present form without the Arons. It&#39;s not too difficult to deal with popular institutions that have no problems. But it&#39;s quite another thing to deal with the obstacles and vicissitudes that have faced South Street Seaport Museum in Lower Manhattan. That a corner, however modest, has been turned is in no small way due to their efforts. ROBERT W. HUBNER Darien, Connecticut Bravos All Around! Please send me a copy of the Guide to American and Canadian Maritime Museums at the pre-publication price to NMHS members of $7.75. Such a project has long been needed. Bravo for doing it! FREDA M. ABRAMS Yellow Springs, Ohio And Bravo to Texaco Inc.fo_r making this publication possible! Ms. Abrams, author ofTall Ships of Newburyport, is one ofsome2,000NMHSmemberswhohave ordered copies of the Guide as we go to press.-Eo Fresh Light on Lightships The brief coverage provided on lightships in the Summer Sea History was indeed a refreshing change from your customary preoccupation with squarerigged sailing vessels. Managing Editor Norma Stanford&#39;s observation regarding thirteen of the surviving lightships that &quot; it has been argued that we have saved too many-a number disproportionate to their historical significance&quot; appears naive. In view of the fact that nine of these thirteen SEA HISTORY 56, WINTER 1990