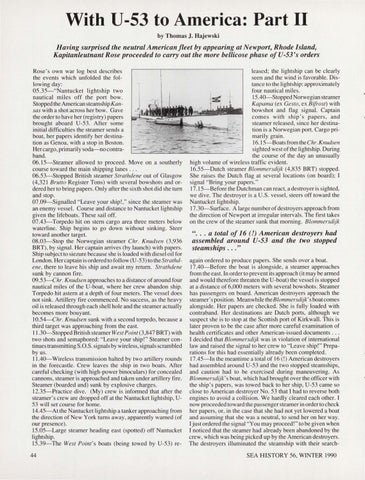 With U-53 to Alllerica: Part II by Thomas J. Hajewski

Having surprised the neutral American fleet by appearing at Newport, Rhode I stand, Kapitanleutnant Rose proceeded to carry out the more bellicose phase of U-53&#39;s orders Rose&#39;s own war log best describes the events which unfolded the following day: 05.35-&quot;Nantucket lightship two nauti ca l miles off the port bow. Stopped the American steamship Kansas with a shot across her bow. Gave the order to have her (registry) papers brought aboard U-53 . After some initial difficulties the steamer sends a boat, her papers identify her destination as Genoa, with a stop in Boston. Her cargo, primarily soda-no contraband. 06.15-Steamer allowed to proceed. Move on a southerly course toward the main shipping lanes ... 06.53-Stopped British steamer Strathdene out of Glasgow (4,321 Brutto Register Tons) with several bowshots and ordered her to bring papers. Only after the sixth shot did she tum and stop. 07 .09-Signalled &quot;Leave your ship! ,&quot; since the steamer was an enemy vessel. Course and distance to Nantucket lightship given the lifeboats. These sai l off. 07.43-Torpedo hit on stem cargo area three meters below waterline. Ship begins to go down without sinking. Steer toward another target. 08.03-Stop the Norwegian steamer Chr. Knudsen (3,936 BRT), by signal. Her captain arrives (by launch) with papers. Ship subject to siezure because she is loaded with diesel oil for London. Her captain is ordered to follow (U-53) to theStrathdene, there to leave his ship and await my return . Strathdene sunk by cannon fire. 09.53-Chr. Knudsen approaches to a distance of around four nautical miles of the U-boat, where her crew abandon ship. Torpedo hit astern at a depth of four meters. The vessel does not sink. Arti llery fire commenced. No success, as the heavy oil is released through each shell hole and the steamer actually becomes more bouyant. 10.54-Chr. Knudsen sunk with a second torpedo, because a third target was approaching from the east. 11.30-Stopped British steamer West Point (3,847 BRT) with two shots and semaphored: &quot;Leave your ship! &quot; Steamer continues transmitting S.O.S. signals by wireless, signals scrambled by us. 11.40-Wireless transmi ssion halted by two artillery rounds in the forecastle. Crew leaves the ship in two boats. After carefu l checking (with high-power binoculars) for concealed cannons, steamer is approached and taken under artillery fire. Steamer (boarded and) sunk by explosive charges. 12.35- Practice dive. (My) crew is informed that after the steamer&#39;s crew are dropped off at the Nantucket lightship, U53 will set course for home. 14.45-At the Nantucket lightship a tanker approaching from the direction of New York turns away, apparently warned (of our presence). 15.05-Large steamer heading east (spotted) off Nantucket lightship. 15.39-The West Point&#39;s boats (being towed by U-53) re44

leased; the lightship can be clearly seen and the wind is favorable. Distance to the lightship: approximately four nautical miles. 15.40-StoppedNorwegiansteamer Kapama (ex Gesto, ex Bifrost) with bowshot and flag signal. Captain co me s with ship &#39;s papers, and steamer released, since her destination is a Norwegian port. Cargo primarily grain. 16.15-Boats from the C hr. Knudsen sighted west of the lightship. During the course of the day an unusually high volume of wireless traffic evident. 16.55-Dutch steamer Blommersdijk (4,835 BRT) stopped . She raises the Dutch flag at several locations (on board); I signal &quot;Bring your papers.&quot; 17 .15-Before the Dutchman can react, a destroyer is sighted, we dive. The destroyer is a U.S. vessel , steers off toward the Nantucket lightship. 17 .30-Surface. A large number of destroyers approach from the direction of Newport at irregular intervals. The first takes on the crew of the steamer sunk that morning. Blommersdijk

&quot; ... a total of 16 (!)American destroyers had assembled around U-53 and the two stopped steamships ... &quot; again ordered to produce papers. She sends over a boat. 17.40-Before the boat is alongside, a steamer approaches from the east. In order to prevent its approach (it may be armed and would therefore threaten the U-boat) the vessel is stopped at a distance of 6,000 meters with several bowshots. Steamer has passengers on board. American destroyers approach the steamer&#39;s position. Meanwhile theBlommersdijk&#39;s boat comes alongside. Her papers are checked. She is fully loaded with contraband. Her destinations are Dutch ports, although we suspect she is to stop at the Scottish port of Kirkwall. This is later proven to be the case after more careful examination of health certificates and other American-issued documents ... I decided that Blommersdijk was in violation of international law and raised the signal to her crew to &quot;Leave ship!&quot; Preparations for this had essentially already been completed. 17.45-In the meantime a total of 16 (!)American destroyers had assembled around U-53 and the two stopped steamships, and caution had to be exercised during maneuvering. As Blommersdijk&#39; s boat, which had brought over the officer with the ship&#39; s papers, was towed back to her ship, U-53 came so close to American destroyer No. 53 that I had to reverse both engines to avoid a collision. We hardly cleared each other. I now proceeded toward the passenger steamer in order to check her papers, or, in the case that she had not yet lowered a boat and assuming that she was a neutral, to send her on her way. I just ordered the signal &quot; You may proceed! &quot; to be given when I noticed that the steamer had already been abandoned by the crew, which was being picked up by the American destroyers. The destroyers illuminated the steamship with their searchSEA HISTORY 56, WINTER 1990