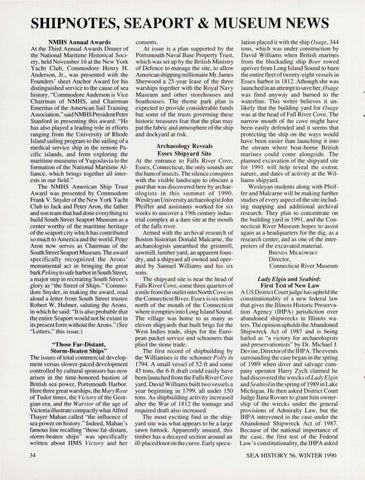 SHIPNOTES, SEAPORT &amp; MUSEUM NEWS NMHS Annual Awards At the Third Annual Awards Dinner of the National Maritime Historical Society, held November 16 at the New York Yacht Club, Commodore Henry H. Anderson, Jr. , was presented with the Founders&#39; sheet Anchor A ward for his distinguished service to the cause of sea history. &quot;Commodore Anderson is Vice Chairman of NMHS, and Chairman Emeritus of the American Sail Training Association,&quot; saidNMHS President Peter Stanford in presenting this award. &quot;He has also played a leading role in efforts ranging from the University of Rhode Island sailing program to the sailing of a medical service ship in the remote Pacific islands, and from exploring the maritime museums of Yugoslavia to the formation of the National Maritime Alliance, which brings together all interests in our field.&quot; The NMHS American Ship Trust Award was presented by Commodore Frank V. SnyderoftheNew York Yacht Club to Jack and Peter Aron, the father and son team that had done everything to build South Street Seaport Museum as a center worthy of the maritime heritage of the seaport city which has contributed so much to America and the world. Peter Aron now serves as Chairman of the South Street Seaport Museum. The award specifically recognized the Aron s&#39; monumental act in bringing the great bark Peking to safe harbor in South Street, a major step in recreating South Street&#39;s glory as &quot;the Street of Ships.&quot; Commodore Snyder, in making the award, read aloud a letter from South Street trustee Robert W. Hubner, saluting the Arons, in which he said: &quot;It is also probable that the entire Seaport would not be extant in its present form with out the Arons.&quot; (See &quot;Letters,&quot; this issue.)

consorts. At issue is a plan supported by the Portsmouth Naval Base Property Trust, which was set up by the British Ministry of Defence to manage the site, to allow American shipping millionaire Mr. James Sherwood a 25-year lease of the three warships together with the Royal Navy Mu seum and other storehou ses and boathouses. The theme park plan is expected to provide considerable funds but some of the trusts governing these historic treasures fear that the plan may put the fabric and atmosphere of the ship and dockyard at ri sk.

lation placed it with the ship Osage, 344 tons, which was under construction by David Williams when British marines from the blockading ship Boer rowed upriver from Long Island Sound to burn the entire fleet of twenty-eight vessels in Essex harbor in 1812. Athough she was launched in an attempt to save her, Osage was fired anyway and burned to the waterline. This writer believes it unlikely that the building yard for Osage was at the head of Fall River Cove. The narrow mouth of the cove might have been easily defended and it seems that protecting the ship on the ways would have been easier than launching it into the stream where boat-borne British marines could come alongside. The planned excavation of the shipyard site for 1991 will help reveal the extent, nature, and dates of activity at the Williams shipyard. Wesleyan students along with Pfeiffer and Malcarne will be making further studies of every aspect of the site including mapping and additional archival research. They plan to concentrate on the building yard in 1991, and the Connecticut River Museum hopes to assist again as a headquarters for the dig, as a research center, and as one of the interpreters of the excavated material.

Archaeology Reveals Essex Shipyard Site At the entrance to Falls River Cove, Essex, Connecticut, the only sounds are the hum of insects. The si lence conspires with the visible landscape to obscure a past that was discovered here by archaeologists in thi s summer of 1990. Wesleyan University archaeologist John Pfeiffer and assistants worked for six weeks to uncover a 19th century industrial complex at a dam site at the mouth of the falls river. Armed with the archival research of Boston historian Donald Malcarne, the archaeologists unearthed the gristmill, sawmill, lumber yard, an apparent founB RENDA MlLKOWSKY Director, dry, and a shipyard all owned and operated by Samuel Williams and his six Connecticut River Museum sons. Lady Elgin and Seabird: The shipyard site is near the head of Falls River Cove, some three quarters of First Test of New Law a mile from the outlet into North Cove on A US District Court judge has upheld the the Connecticut River. Essex is six miles consti tutionality of a new federal law north of the mouth of the Connecticut that gives the Illinois Historic Preservawhere it empties into Long Island Sound. tion Agency (IHPA) jurisdiction over The village was home to as many as Âˇ abandoned shipwrecks in Illinois waeleven shipyards that built brigs for the ters. The opinion upholds the Abandoned West Indies trade, ships for the Euro- Shipwreck Act of 1987 and is being pean packet service and schooners that hailed as &quot;a victory for archaeologists plied the stone trade. and preservationists&quot; by Dr. Michael J. The first record of shipbuilding by Devine, Directorof the IHP A. The events the Williamses is the schooner Polly in surrounding the case began in the spring 1794. A small vessel of 52-ft and some of 1989 when diver and salvage com45 tons , the 6-ft draft could easily have pany operator Harry Zych claimed he been launched from the Falls River Cove had discovered the wrecks of Lady Elgin yard. David Williams built two vessels a and Seabird in the spring of 1989 in Lake year beginning in 1799, all under 150 Michigan. He then asked District Court tons. As shipbuilding activity increased Judge Ilana Rovner to grant him ownerafter the War of 1812 the tonnage and ship of the wrecks under the general required draft also increased. provisions of Admiralty Law, but the The most exciting find in the ship- IHP A intervened in the case under the yard site was what appears to be a large Abandoned Shipwreck Act of 1987. sawn futtock. Apparently unused, this Because of the national importance of timber has a decayed section around an the case, the first test of the Federal ill-placed knot on the curve. Early specu- Law&#39;s constitutionality, theIHPA asked SEA HISTORY 56, WINTER 1990