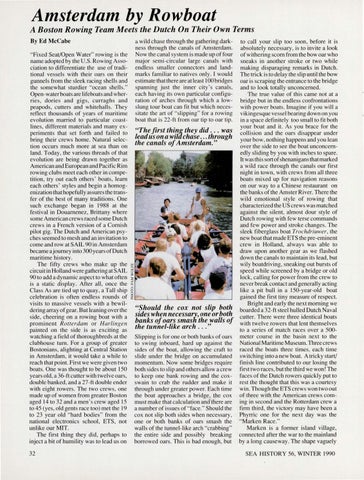 Amsterdam by Rowboat A Boston Rowing Team Meets the Dutch On Their Own Terms By Ed McCabe &quot;Fixed Seat/Open Water&quot; rowing is the name adopted by the U.S. Rowing Association to differentiate the use of traditional vessels with their oars on their gunnels from the sleek racing shell s and the somewhat sturdier &quot;ocean shell s.&quot; Open-water boats are lifeboats and wherries, dories and gigs , c urraghs and peapods, cutters and whitehalls. They reflect thousands of years of maritime evolution married to particular coastlines, different materials and many experiments that set forth and failed to bring their crews home. Natural selection occurs much more at sea than on land. Today, the various threads of that evolution are bei ng drawn together as American and European and Pacific Rim rowing clubs meet each other in competition , try out each others&#39; boats, learn each others&#39; sty les and beg in a homogenization that hopefully assures the transfer of the best of many traditions. One such exchange began in 1988 at the festival in Douamenez, Brittany where some American crews raced some Dutch crews in a French version of a Comish pilot gig. The Dutch and American psyches seemed to mesh and an invitation to come and row at SAIL 90 in Amsterdam became a journey into 300 years of Dutch maritime hi story. The fifty crews who make up the circuit in Holland were gathering at SAIL 90 to add a dynamic aspect to what often is a static display. After all , once the Class As are tied up to quay, a Tall ship celebration is often endless rounds of visits to mass ive vessels with a bewildering array of gear. But leaning over the side, cheering on a rowing boat with a promin ent Rotterdam or Harlingen painted on the side is as exciting as watching a field of thoroughbreds at the clubhouse turn. For a group of greater Bostoni ans, alighting at Central Station in Amsterdam , it would take a while to reach that point. First we were given two boats. One was thought to be about 150 years old , a 36-ft cutter with twelve oars, double banked, and a 27-ft double ender with eight rowers. The two crews, one made up of women from greater Boston aged 14 to 32 and a men &#39;s crew aged 15 to 45 (yes, old gents race too) met the 19 to 23 year old &quot; hard bodies&quot; from the national electronics school, ETS, not unlike our MIT. The first thing they did, perhaps to inject a bit of humility was to lead us on 32

a wild chase through the gatheri ng darkness through the canals of Amsterdam. Now the canal system is made up of four major semi-circu lar large canals with endless smaller connectors and landmarks familiar to natives onl y. I would estimate that there are at least 100 bridges spanning just the inner city &#39; s canals, each having its own particular configuration of arches through which a lowslung tour boat can fit but which necessitate the art of &quot;slipping&quot; fo r a rowing boat that is 22-ft from oar tip to oar tip.

&quot;The first thing they did . .. was lead us on a wild chase .. . through the canals of Amsterdam.&quot;

to call your slip too soon, before it is absolutely necessary , is to invite a look of withering scorn from the bow oar who sneaks in another stroke or two while making di sparaging remarks in Dutch. The trick is to delay the slip until the bow oar is scraping the entrance to the bridge and to look totally unconcerned. The true val ue of this came not at a bridge but in the-endless confrontations with power boats. Imagine if you will a vik ingesque vessel bearing down on you in a space definitely too small to fit both your boat and it. As you brace for the collision and the oars disappear under your bow, nothing happens and yo u lean over the side to see the boat unconcerned ly sliding by you with inches to spare. It was this sort of shenanigans that marked a wi ld race through the canals our first night in to wn, with crews from a ll three boats mixed up for navigation reasons on our way to a Chinese restaurant on the banks of the Amster Ri ver. There the wi ld emotional style of row ing that characterized the US crews was matched against the si lent, almost dour style of Dutch rowing with few terse commands and few power and stroke changes. The sleek fiberglass boat Trochdriuwer, the new boat that made ETS the pre-eminent crew in Holland, always was able to draw upon another gear as we flashed down the canals to maintain its lead, but wil y boatdriving, sneaking out bursts of speed while screened by a bridge or old lock, calling for power from the crew to never break contact and generall y acting like a pit bull in a 150-year-old boat gai ned the first tiny measure of respect. Brig ht and earl y the next morning we boarded a 32-ft steel hulled Dutch Naval cutter. There were three identical boats with twelve rowers that lent themselves to a series of match races over a 500meter course in the basin next to the National Maritime Museum . Three crews raced the boats three times, each time switching into a new boat. A tricky start/ finish line contributed to our losing the first two races, but the third we won! The faces of the Dutch rowers quickly put to rest the thought that thi s was a courtesy win . Though the ETS crews won two out of- three with the American crews coming in second and the Rotterdam crew a firm third , the victory may have been a Phyrric one for the next day was the &quot;Marken Race.&quot; Marken is a former island village, connected after the war to the mainland by a long causeway. The shape vaguely SEA HISTORY 56, WINTER 1990