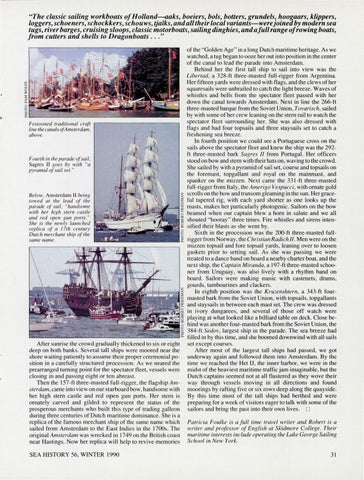 of the &quot;Golden Age&quot; in a long Dutch maritime heritage. As we watched, a tug began to ooze her out into position in the center of the canal to lead the parade into Amsterdam. Behind her the first tall ship to sail into view was the Libertad, a 328-ft three-masted full-rigger from Argentina. Her fifteen yards were dressed with flags, and the clews of her squaresai ls were unbrailed to catch the light breeze. Waves of whistles and bells from the spectator fleet passed with her down the canal towards Amsterdam. Next in line the 266-ft three-masted barque from the Soviet Union, Tovarisch, sailed by with some of her crew lean ing on the stem rail to watch the Festooned traditional craft . - - - - - - - - - - - - - - - , spectator fleet surrounding her. She was also dressed with flags and had four topsai ls and three staysails set to catch a line the canals ofAmsterdam, freshening sea breeze. above. In fourth position we could see a Portuguese cross on the sails above the spectator fleet and knew the ship was the 292ft three-masted bark Sagres fl from Portugal. Her officers Fourth in the parade of sail, stood on bow and stem with their hats on, waving to the crowd. Sagres II goes by with &quot;a She sai led by with a pyramid of sail set, course and topsail s on pyramid of sail set.&quot; the foremast, topgallant and royal on the mainmast, and spanker on the mizzen . Next came the 331-ft three-masted full -rigger from Italy, the Amerigo Vespucci , with ornate gold ~ scro ll s on the bow and transom gleaming in the sun. Her graceBelow, Amsterdam II being ~ ful tapered rig, with each yard shorter as one looks up the towed at the lead of the parade of sail, &quot;handsome ~ masts, makes her particularly photogenic. Sailors on the bow with her high stern castle ~ beamed when our captain blew a horn in salute and we all and red open gun ports.&quot; ~ shouted &quot; hooray&quot; three times. Fire whistles and sirens intenShe is the newly launched ~ sified their blasts as she went by. replica of a 17th century ~ Sixth in the procession was the 200-ft three-masted full Dutch merchant ship of the g: rigger from Norway, the Christian Radich II . Men were on the same name. mizzen topsail and fore topsail yards, leaning over to loosen gaskets prior to setting sai l. As she was passing we were treated to a dance band on board a nearby charter boat, and the next ship, the Captain Miranda, a 197-ft three-masted schooner from Uruguay, was also lively with a rhythm band on board. Sailors were making music with castenets, drums, gourds, tambourines and clackers. In eighth position was the Kruzenshtern, a 343-ft fourmasted bark from the Soviet Union, with topsails, topgallants and staysails in between each mast set. The crew was dressed in ivory dungarees, and several of those off watch were playing at what looked like a billiard table on deck. Close behind was another four-masted bark from the Soviet Union, the 384-ft Sedov, largest ship in the parade. The sea breeze had filled in by this time, and she boomed downwind with all sails After sunri se the crowd gradually thickened to six or eight set except courses. After most of the largest tall ships had passed, we got deep on both banks. Several tall ships were moored near the shore waiting patiently to assume their proper ceremonial po- underway again and followed them into Amsterdam. By the sition in a carefully structured procession. As we neared the time we reached the Het IJ, the inner harbor, we were in the prearranged turning point for the spectator fleet, vessels were midst of the heaviest maritime traffic jam imaginable, but the closing in and passing eight or ten abreast. Dutch captains seemed not at all flu stered as they wove their Then the 157-ft three-masted full-rigger, the flag ship Am- way through vessels moving in all directions and found sterdam, came into view on our starboard bow , handsome with moorings by rafting five or six rows deep along the quayside. her hi gh stem castle and red open gun ports. Her stem is By this time most of the tall ships had berthed and were ornately carved and gilded to represent the status of the preparing for a week of visitors eager to talk with some of the prosperous merchants who built this type of tradi ng galleon sai lors and bring the past into their own lives. 0 during three centuries of Dutch maritime dominance. She is a replica of the famous merchant ship of the same name which Patricia Foulke is a full time travel writer and Robert is a sai led from Amsterdam to the East Indies in the 1700s. The writer and professor of English at Skidmore College. Their original Amsterdam was wrecked in 1749 on the British coast maritime interests include operating the Lake George Sailing near Hastings . Now her replica will help to revive memories School in New York. SEA HISTORY 56, WINTER 1990