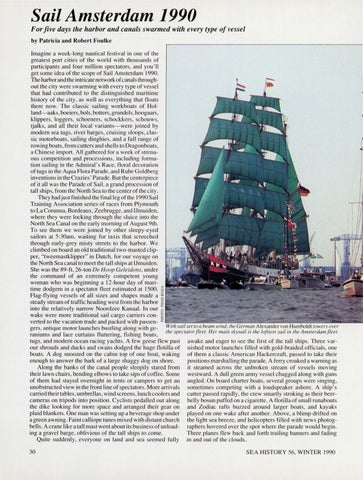 Sail Amsterdam 1990 For five days the harbor and canals swarmed with every type of vessel by Patricia and Robert Foulke Imagine a week-long nautical festival in one of the greatest port ci ties of the world with thousands of participants and four million spectators, and you&#39; ll get some idea of the scope of Sail Amsterdam 1990. The harbor and the intricate network of canals throughout the city were swarming with every type of vessel that had contributed to the distinguished maritime history of the city, as well as everything that floats there now . The classic sai ling workboats of Holland- aaks, boeiers, bols, botters, grundels, hoogaars, klippers, loggers, schoeners, schockkers, schouws, tjalks, and all their local variants- were joined by modem sea tugs, river barges, cruising sloops, classic motorboats, sailing dinghies, and a full range of rowing boats, from cutters and shell s to Dragonboats, a Chinese import. All gathered for a week of strenuous competition and processions, including formation sailing in the Admiral&#39;s Race, floral decoration of tugs in the Aqua Flora Parade, and Rube Goldberg inventions in the Crazies &#39; Parade. But the centerpiece of it all was the Parade of Sail, a grand procession of tall ships, from the North Sea to the centerof the city. They had just finished the final leg of the 1990 Sail Training Association series of races from Plymouth to La Corunna, Bordeaux, Zeebrugge, and IJmuiden , where they were locking through the sluice into the North Sea Canal on the early morning of August 9th. To see them we were joined by other sleepy-eyed sailors at 5:30am, waiting for taxis that screeched through early-grey misty streets to the harbor. We climbed on board an old traditional two-masted clipper, &quot;tweemastklipper&quot; in Dutch, for our voyage on the North Sea canal to meet the tall ships at IJmuiden. She was the 89-ft, 26-ton De Hoop Geleidons, under the command of an extremely competent young woman who was beginning a 12-hour day of maritime dodgem in a spectator fl eet estimated at 1500. Flag-flying vessels of all sizes and shapes made a ~ steady stream of traffic heading west from the harbor ~ S~l:.~~ &quot;&#39;Â°?~~~~!ji~;!~~~ into the relatively narrow Noordzee Kanaal. In our b ~. ,__ , ,~- Iii;~ wake were more traditional sail cargo carriers con- ~ verted to the vacation trade and packed with passen- ;;:: b::.-.-=~.~-.111!!!!11:5&#39;.::&#39;.::_~~~~~z,;;_:;_~:;;:;;~~=::~~~!I! gers antique motor launches bustling along with ge- With sail set to a beam w111d, the German Alexander von Humboldt towers over rani~ms and lace curtains fluttering, fi shing boats, the spectatorjleet. Her main skysail is the loftiest sail in the Amsterdam fl eet. tugs, and modem ocean racing yachts. A few geese flew past awake and eager to see the first of the tall ships. Three varour shrouds and ducks and swans dodged the huge flotilla of nished motor launches filled with gold-braided officials, one boats. A dog snoozed on the cabin top of one boat, waking of them a classic American Hackercraft, passed to take thei r positions marshalling the parade. A ferry croaked a warning as enough to answer the bark of a large shaggy dog on shore. Along the banks of the canal people sleepily stared from it steamed across the unbroken stream of vessels moving their lawn chairs, bending elbows to take sips of coffee. Some westward. A dull green army vessel chugged along with guns of them had stayed overnight in tents or campers to get an angled. On board charter boats, several groups were singing, unobstructed view in the front line of spectators. More arrivals sometimes competing with a loudspeaker ashore. A ship &#39;s carried theirtables, umbrellas, wind screens, lunch coolers and cutter passed rapidly, the crew smartly stroki ng as their beercameras on tripods into posi tion. Cyclists pedalled out along bell y bosun puffed on a cigarette. A flotilla of small runabouts the dike looking for more space and arranged their gear on and Zodiac rafts buzzed around larger boats, and kayaks plaid blankets. One man was setting up a beverage shop under played on one wake after another. Above, a blimp drifted on a green awning. Faint calliope tunes mixed with distant church the light sea breeze, and helicopters filled with news photogbells. A crane like a tall mast went about its busi ness of unload- rap hers hovered over the spot where the parade would begin. ing a gravel barge, oblivious of the tall ships to come. Three planes flew back and forth trailing banners and fading Quite suddenly, everyone on land and sea seemed full y in and out of the clouds..