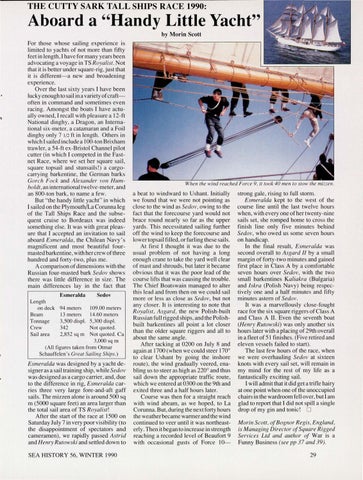 Aboard a ''Handy Little Yacht'' by Morin Scott For those whose sailing experience is limited to yachts of not more than fifty feet in length, I have for many years been advocating a voyage in TS Royalist. Not that it is better under square-rig, just that it is different-a new and broadening experience. Over the last sixty years I have been 1ucky enough to sai I in a variety of craftoften in command and sometimes even racing. Amongst the boats I have actually owned, I recall with pleasure a 12-ft National dinghy, a Dragon , an International six-meter, a catamaran and a Foil dinghy only 7 1/2 ft in length . Others in which I sailed include a i 00-ton Brixham trawler, a 54-ft ex-Bristol Channel pi lot cutter (in which I competed in the Fastnet Race, where we set her square sail, square topsail and stunsails!) a cargocarrying barkentine, the German barks Gorch Fack and Alexander von Humboldt, an international twelve-meter, and an 800-ton bark, to name a few . But " the handy little yacht" in which I sailed on the Plymouth/La Corunna leg of the Tall Ships Race and the subsequent cruise to Bordeaux was indeed something else. It was with great pleasure that I accepted an invitation to sail aboard Esmeralda, the Chilean Navy ' s magnificent and most beautiful fourmasted barkentine, with her crew of three hundred and forty-two, plus me. A comparison of dimensions with the Russ ian four-masted bark Sedov shows there was little difference in size. The main differences lay in the fact that Esmeralda Length on deck Beam Tonnage Crew Sail area

Esmeralda was designed by a yacht designeras a sail training ship, whileSedov was designed as a cargo carrier, and, due to the difference in rig, Esmeralda carries three very large fore-and-aft gaff sail s. The mizzen alone is around 500 sq m (5000 square feet) an area larger than the total sail area of TS Royalist! After the start of the race at 1500 on Saturday July 7 in very poor visibility (to the disappointment of spectators and cameramen), we rapidly passed Astrid and Henry Rutowski and settled down to SEA HISTORY 56, WINTER 1990

When the wind reached Force 9, it took 40 men to stow the mizzen.

a beat to windward to Ushant. Initially we found that we were not pointing as close to the wind as Sedov, owing to the fact that the forecourse yard would not brace round nearly so far as the upper yards. This necessitated sailing further off the wind to keep the forecourse and lower topsai I fi I led , or furling these sails. At first I thought it was due to the usual problem of not having a long enough crane to take the yard well clear of mast and shrouds, but later it became obvious that it was the poor lead of the course lifts that was causing the trouble. The Chief Boatswain managed to alter this lead and from then on we could sail more or less as close as Sedov, but not any closer. It is interesting to note that Royalist, Asgard, the new Polish-built Russian full rigged ships, and thePolishbuilt barkentines all point a lot closer than the older square riggers and all to about the same angle. After tacking at 0200 on July 8 and again at 1700 (when we could steer 170Â° to clear Ushant by going the inshore route) , the wind gradually veered, enabling us to steer as high as 220Â° and thus sail down the appropriate traffic route, which we entered at 0300 on the 9th and exited three and a half hours later. Course was then for a straight reach with wind abeam, as we hoped, to La Corunna. But, during the next forty hours the weather became warmer and the wind continued to veer until it was northeasterly. Then it began to increase in strength reaching a recorded level of Beaufort 9 with occasional gusts of Force IO-

strong gale, rising to full storm. Esmeralda kept to the west of the course line until the last twelve hours when, with every one of her twenty-nine sails set, she romped home to cross the finish line only five minutes behind Sedov, who owed us some seven hours on handicap. In the final result, Esmeralda was second overall to Asgard II by a small margin of forty-two minutes and gained first place in Class A by a comfortable seven hours over Sedov, with the two small barkentines Kaliakra (Bulgaria) and Iskra (Polish Navy) being respectively one and a half minutes and fifty minutes astern of Sedov . It was a marvellously close-fought race for the six square riggers of Class A and Class A II. Even the seventh boat (Henry Rutowski) was only another six hours later with a placing of 29th overall in a fleet of 51 finishes . (Five retired and eleven vessels failed to start). The last few hours of the race, when we were overhauling Sedov at sixteen knots with every sail set, will remain in my mind for the rest of my life as a fantastically exciting sail. I will admit that it did get a trifle hairy at one point when one of the unoccupied chairs in the wardroom fell over, but I am glad to report that I did not spill a single drop of my gin and tonic! D

Morin Scott, of Bognar Regis, England, is Managing Director of Square Rigged Services Ltd and author of War is a Funny Business (see pp 37 and 39) . 29