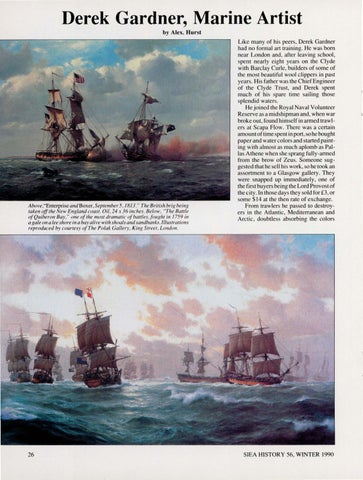 Above,"Enterprise and Boxer, September 5, 1813 ." The British brig being taken off the New England coast. Oil, 24 x 36 inches. Below, "The Battle of Quiberon Bay ," one of the most dramatic of battles.fought in 1759 in a gale on a lee shore in a bay alive with shoals and sandbanks. Illustrations reproduced by courtesy o/The Polak Gallery, King Street , London.

Like many of his peers, Derek Gardner had no formal art training. He was born near London and , after leaving school , spent nearly eight years on the Clyde with Barclay Curle, builders of some of the most beautiful wool clippers in past years. Hi s father was the Chief Engineer of the Clyde Trust, and Derek spent much of hi s spare time sailing those splendid waters. He joined the Royal Naval Volunteer Reserve as a midshipman and, when war broke out, found himself in armed trawlers at Scapa Flow. There was a certain amount of time spent in port, so he bought paper and water colors and started painting with almost as much aplomb as Pallas Athene when she sprang fully-armed from the brow of Zeus. Someone suggested that he sell his work, so he took an assortment to a Glasgow gallery. They were snapped up immediately, one of the first buyers being the Lord Provost of the city. In those days they sold forÂŁ3 , or some $14 at the then rate of exchange. From trawlers he passed to destroyers in the Atlantic, Mediterranean and Arctic, doubtless absorbing the colors