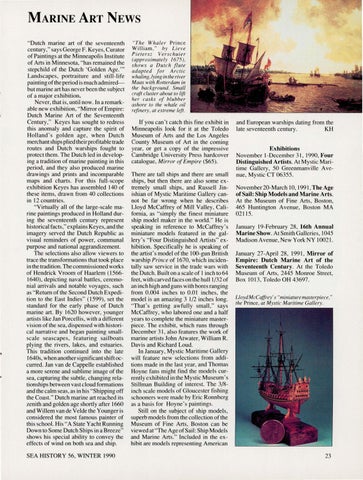 MARINE ART NEWS &quot;Dutch marine art of the seventeenth century,&quot; says George F. Keyes, Curator of Paintings at the Minneapolis Institute of Arts in Minnesota, &quot;has remained the stepchild of the Dutch &#39;Golden Age.&quot;&#39; Landscapes, portraiture and still-life painting of the period is much admiredbut marine art has never been the subject of a major exhibition. Never, that is , until now. In a remarkable new exhibition, &quot;Mirror of Empire: Dutch Marine Art of the Seventeenth Century,&quot; Keyes has sought to redress this anomaly and capture the spirit of Holland &#39;s golden age, when Dutch merchant ships plied their profitable trade routes and Dutch warships fought to protect them. The Dutch led in developing a tradition of marine painting in this period, and they also produced marine drawings and prints and incomparable maps and charts. For this full-scope exhibition Keyes has assembled 140 of these items, drawn from 40 collections in 12 countries. &quot;Virtually all of the large-scale marine paintings produced in Holland during the seventeenth century represent historical facts,&quot; explains Keyes, and the imagery served the Dutch Republic as visual reminders of power, communal purpose and national aggrandizement. The selections also allow viewers to trace the transformations that took place in the tradition. The commissioned works of Hendrick Vroom of Haarlem (15661640), depicting naval battles, ceremonial arrivals and notable voyages, such as &quot;Return of the Second Dutch Expedition to the East Indies&quot; (1599), set the standard for the early phase of Dutch marine art. By 1620 however, younger artists like Jan Porcellis, with a different vision of the sea, dispensed with hi storical narrative and began painting smallscale seascapes, featuring sailboats plying the rivers, lakes, and estuaries. This tradition continued into the late 1640s, when another significant shift occurred. Jan van de Cappelle established a more serene and sublime image of the sea, capturing the subtle, changing relationships between vast cloud formations and the calm seas, as in his &quot;Shipping off the Coast.&quot; Dutch marine art reached its zenith and golden age shortly after 1660 and Willem van de Velde the Younger is considered the most famous painter of this school. His &quot;A State Yacht Running Down to Some Dutch Ships in a Breeze&quot; shows his special ability to convey the effects of wind on both sea and ship. SEA HISTORY 56, WINTER 1990

William ,&quot; by Lieve Pietersz Verschuier (approximately 1675 ), shows a Dutch flute adapted for Arctic whaling, lying in the river Maas with Rotterdam in the background. Small craft cluster about to lift her casks of blubber ashore to the whale oil refinery, at extreme left.

If you can&#39;t catch this fine exhibit in Minneapolis look for it at the Toledo Museum of Arts and the Los Angeles County Museum of Art in the coming year, or get a copy of the impressive Cambridge University Press hardcover catalogue, Mirror of Empire ($65).

There are tall ships and there are small ships, but then there are also some extremely small ships, and Russell Jinishian of Mystic Maritime Gallery cannot be far wrong when he describes Lloyd McCaffrey of Mill Valley , California, as &quot;simply the finest miniature ship model maker in the world.&quot; He is speaking in reference to McCaffrey &#39;s miniature models featured in the gallery&#39; s &quot;Four Distinguished Artists&quot; exhibition. Specifically he is speaking of the artist&#39;s model of the 100-gun British warship Prince of 1670, which incidentally saw service in the trade wars with the Dutch. Built on a scale of 1 inch to 64 feet, with carved faces on the hull l/32of an inch high and guns with bores ranging from 0.004 inches to 0.01 inches, the model is an amazing 3 1/2 inches long. &quot;That&#39;s getting awfully small ,&quot; says McCaffrey, who labored one and a half years to complete the miniature masterpiece. The exhibit, which runs through December 31, also features the work of marine artists John Atwater, William R. Davis and Richard Loud. In January , Mystic Maritime Gallery will feature new selections from additions made in the last year, and Thomas Hoyne fans might find the models currently exhibited in the Mystic Museum &#39; s Stillman Building of interest. The 3/8inch scale models of Gloucester fishing schooners were made by Eric Ronnberg as a basis for Hoyne &#39;s paintings. Still on the subject of ship models, superb models from the collection of the Museum of Fine Arts, Boston can be viewedat&quot;TheAgeofSail: Ship Models and Marine Arts.&quot; Included in the exhibit are models representing American