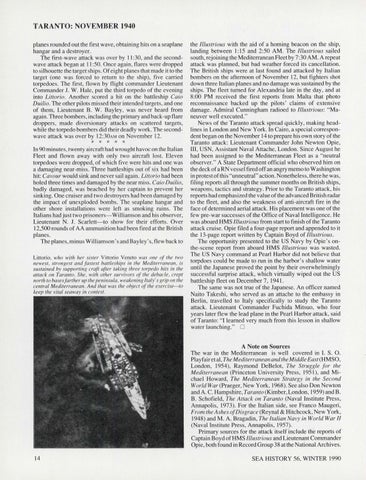 TARANTO: NOVEMBER IMO planes rounded out the first wave, obtaining hits on a seaplane hangar and a destroyer. The first-wave attack was over by 11 :30, and the secondwave attack began at 11 :50. Once again, flares were dropped to silhouette the target ships. Of eight planes that made it to the target (one was forced to return to the ship), five carried torpedoes . The first, flown by flight commander Lieutenant Commander J. W. Hale, put the third torpedo of the evening into Littorio. Another scored a hit on the battleship Caio Duilio. The other pilots missed their intended targets, and one of them, Lieutenant B. W. Bayley, was never heard from again . Three bombers, including the primary and back-up flare droppers, made diversionary attacks on scattered targets, while the torpedo bombers did their deadly work. The secondwave attack was over by 12:30AM on November 12.

In 90 minutes, twenty aircraft had wrought havoc on the Italian Fleet and flown away with only two aircraft lost. Eleven torpedoes were dropped, of which five were hits and one was a damaging near-miss. Three battleships out of six had been hit: Cavour would sink and never sail again. Littorio had been holed three times and damaged by the near miss. Caio Duilio, badly damaged, was beached by her captain to prevent her sinking. One cruiser and two destroyers had been damaged by the impact of unexploded bombs. The seaplane hangar and other shore installations were left as smoking ruins. The Italians had just two prisoners-Williamson and his observer, Lieutenant N. J. Scarlett-to show for their efforts. Over 12,500 rounds of AA ammunition had been fired at the British planes. The planes, minus Williamson&#39;s and Bayley&#39;s, flew back to Littorio, who with her sister Vittorio Veneto was one of the two newest, strongest and fastest battleships in the Mediterranean, is sustained by supporting craft after taking three torpedo hits in the attack on Taranto . She , with other survivors of the debacle , crept north to bases farther up the peninsula, weakening Italy&#39;s grip on the central Mediterranean. And that was the object of the exercise--to keep the vital seaway in contest.

the Illustrious with the aid of a homing beacon on the ship, landing between 1: 15 and 2:50 AM. The Illustrious sailed south, rejoining the Mediterranean Fleet by 7:30 AM. A repeat attack was planned, but bad weather forced its cancellation. The British ships were at last found and attacked by Italian bombers on the afternoon of November 12, but fighters shot down three Italian planes and no damage was sustained by the ships. The fleet turned for Alexandria late in the day, and at 8:00 PM received the first reports from Malta that photo reconnaissance backed up the pilots&#39; claims of extensive damage . Admiral Cunningham radioed to Illustrious: &quot;Maneuver well executed.&quot; News of the Taranto attack spread quickly, making headlines in London and New York. In Cairo, a special correspondent began on the November 14 to prepare his own story of the Taranto attack: Lieutenant Commander John Newton Opie, III, USN, Assistant Naval Attache, London. Since August he had been assigned to the Mediterranean Fleet as a &quot;neutral observer.&quot; A State Department official who observed him on the deck of a RN vessel fired off an angry memo to Washington in protest of this &quot;unneutral&quot; action. Nonetheless, there he was, filing reports all through the summer months on British ships, weapons, tactics and strategy. Prior to the Taranto attack, his reports had emphasized the value of the advanced British radar to the fleet, and also the weakness of anti-aircraft fire in the face of determined aerial attack. His placement was one of the few pre-war successes of the Office of Naval Intelligence. He was aboard HMS Illustrious from start to finish of the Taranto attack cruise. Opie filed a four-page report and appended to it the 13-page report written by Captain Boyd of Illustrious. The opportunity presented to the US Navy by Opie&#39;s onthe-scene report from aboard HMS Illustrious was wasted. The US Navy command at Pearl Harbor did not believe that torpdoes could be made to run in the harbor&#39;s shallow water until the Japanese proved the point by their overwhelmingly successful surprise attack, which virtually wiped out the US battleship fleet on December 7, 1941. The same was not true of the Japanese. An officer named Naito Takeshi, who served as an attache to the embassy in Berlin, travelled to Italy specifically to study the Taranto attack. Lieutenant Commander Fuchida Mitsuo, who four years later flew the lead plane in the Pearl Harbor attack, said of Taranto: &quot;I learned very much from this lesson in shallow water launching.&quot; D

A Note on Sources The war in the Mediterranean is well covered in I. S. 0. Playfairetal, The Mediterraneanand the Middle East(HMSO, London, 1954), Raymond DeBelot, The Struggle for the Mediterranean (Princeton University Press, 1951 ), and Michael Howard, The Mediterranean Strategy in the Second World War (Praeger, New York, 1968). See also Don Newton and A. C. Hampshire, Taranto (Kimber, London, 1959) andB. B. Schofield, The Attack on Taranto (Naval Institute Press, Annapolis, 1973). For the Italian side, see Franco Maugeri , From the Ashes ofDisgrace (Reyna! &amp; Hitchcock, New York, 1948) and M.A. Bragadin, The Italian Navy in World War II (Naval Institute Press, Annapolis, 1957). Primary sources for the attack itself include the reports of Captain Boyd of HMS Illustrious and Lieutenant Commander Opie, both found in Record Group 38 at the National Archives. 14