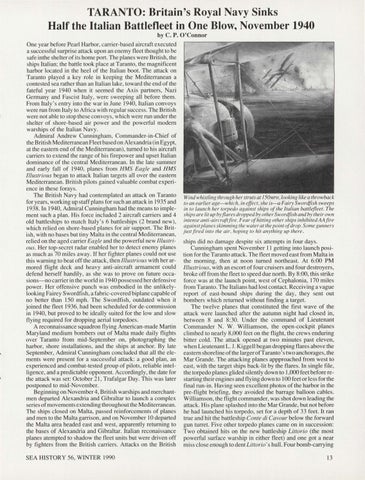 TARANTO: Britain&#39;s Royal Navy Sinks Half the Italian Battlefleet in One Blow, November 1940 by C. P. O&#39;Connor One year before Pearl Harbor, carrier-based aircraft executed a successful surprise attack upon an enemy fleet thought to be safe inthe shelter of its home port. The planes were British, the ships Italian; the battle took place at Taranto, the magnificent harbor located in the heel of the Italian boot. The attack on Taranto played a key role in keeping the Mediterranean a contested sea rather than an Italian lake, toward the end of the fateful year 1940 when it seemed the Axis partners, Nazi Germany and Fascist Italy, were sweeping all before them. From Italy&#39;s entry into the war in June 1940, Italian convoys were run from Italy to Africa with regular success. The British were not able to stop these convoys, which were run under the shelter of shore-based air power and the powerful modem warships of the Italian Navy . Admiral Andrew Cunningham, Commander-in-Chief of the British Mediterranean Fleet based on Alexandria (in Egypt, at the eastern end of the Mediterranean), turned to his aircraft carriers to extend the range of his firepower and upset Italian dominance of the central Mediterranean. In the late summer and early fall of 1940, planes from HMS Eagle and HMS Illustrious began to attack Italian targets all over the eastern Mediterranean. British pilots gained valuable combat experience in these forays. The British Navy had contemplated an attack on Taranto for years, working up staff plans for such an attack in 1935 and 1938. In 1940, Admiral Cunningham had the means to implement such a plan. His force included 2 aircraft carriers and 4 old battleships to match Italy &#39;s 6 battleships (2 brand new), which relied on shore-based planes for air support. The British, with no bases but tiny Malta in the central Mediterranean, relied on the aged carrier Eagle and the powerful new Illustrious. Her top-secret radar enabled her to detect enemy planes as much as 70 miles away. If her fighter planes could not use this warning to beat off the attack, then Illustrious with her armored flight deck and heavy anti-aircraft armament could defend herself handily , as she was to prove on future occasions-no carrier in the world in 1940 possessed her defensive power. Her offensive punch was embodied in the unlikelylooking Fairey Swordfish, a fabric-covered biplane capable of no better than 150 mph. The Swordfish, outdated when it joined the fleet 1936, had been schedu led for de-commission in 1940, but proved to be ideally suited for the low and slow flying required for dropping aerial torpedoes. A reconnaissance squadron flying American-made Martin Maryland medium bombers out of Malta made daily flights over Taranto from mid-September on, photographing the harbor, shore installations, and the ships at anchor. By late September, Admiral Cunningham concluded that all the elements were present for a successful attack: a good plan, an experienced and combat-tested group of pilots, reliable intelligence, and a predictable opponent. Accordingly, the date for the attack was set: October 21, Trafalgar Day. This was later postponed to mid-November. Beginning on November 4, British warships and merchantmen departed Alexandria and Gibraltar to launch a complex series of movements extending throughout the Mediterranean. The ships closed on Malta, passed reinforcements of planes and men to the Malta garrison, and on November 10 departed the Malta area headed east and west, apparently returning to the bases of Alexandria and Gibraltar. Italian reconaissance planes atempted to shadow the fleet units but were driven off by fighters from the British carriers. Attacks on the British SEA HISTORY 56, WINTER 1990

Wind whistling through her struts at J50MPH, looking like a throwback to an earlier age-which , in effect, she is-a Fairy Swordfish sweeps in to launch her torpedo against ships of the Italian battlefleet. The ships are lit up by flares dropped by other Swordfish and by their own intense anti-aircraft fire. Fear of hitting other ships inhibited AA fire against planes skimming the water al the point ofdrop. Some gunners just fired into the air, hoping to hit anything up there.

ships did no damage despite six attempts in four days. Cunningham spent November 11 getting into launch position for the Taranto attack. The fleet moved east from Malta in the morning, then at noon turned northeast. At 6:00 PM Illustrious, with an escort of four cruisers and four destroyers, broke off from the fleet to speed due north. By 8:00, this strike force was at the launch point, west of Cephalonia, 170 miles from Taranto. The Italians had lost contact. Receiving a vague report of east-bound ships during the day, they sent out bombers which returned without finding a target. The twelve planes that constituted the first wave of the attack were launched after the autumn night had closed in, between 8 and 8:30. Under the command of Lieutenant Commander N. W. Williamson, the open-cockpit planes climbed to nearly 8,000 feet on the flight, the crews enduring bitter cold. The attack opened at two minutes past eleven, when Lieutenant L. J. Kiggell began dropping flares above the eastern shoreline of the larger of Taranto&#39; s two anchorages, the Mar Grande. The attacking planes appproached from west to east, with the target ships back-lit by the flares. In single file, the torpedo planes glided silently down to 1,000 feet before restarting their engines and flying down to 100 feet or less forthe final run-in. Having seen excellent photos of the harbor in the pre-flight briefing, they avoided the barrage balloon cables. Williamson, the flight commander, was shot down leading the attack. His plane splashed into the Mar Grande, but not before he had launched his torpedo, set for a depth of 33 feet. It ran true and hit the battleship Conte di Cavour below the forward gun turret. Five other torpedo planes came on in succession: Two obtained hits on the new battleship Littorio (the most powerful surface warship in either fleet) and one got a near miss close enough to dent Littorio&#39; s hull. Four bomb-carrying 13