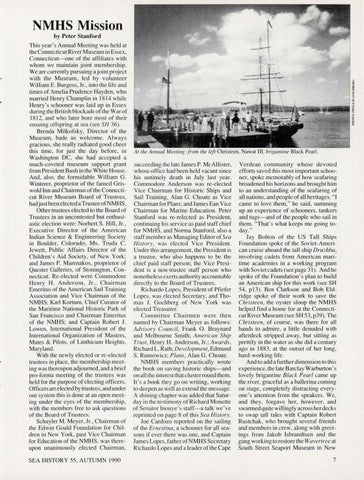 This year&#39;s Annual Meeting was held at the Connecticut River Museum in Essex, Connecticut---one of the affi li ates with whom we maintain joint membership. We are currently pursuing a joint project _ _ with the Museum, led by volunteer William E. Burgess, Jr., into the life and times of Amelia Prudence Hayden, who married Henry Champlin in 1814 while Henry&#39;s schooner was laid up in Essex during the British blockade of the Warof 1812, and who later bore most of their ensuing offspring at sea (see SH 36). Brenda Milkofsky, Director of the Museum, bade us welcome. Always gracious, she really radiated good cheer this time, for just the day before, in At the Annual Meeting: from the left Christeen, Nawat III, brigantine Black Pearl. Washington DC, she had accepted a much-coveted museum support grant succeeding the late James P. McA lli ster, Ve rdean community whose devoted from President Bush in the White House. whose office had been he ld vacant si nce efforts saved this most important schooAnd, also, the formidable William G. his untimely death in Jul y last year. ner, spoke memorably of how seafaring Winterer, proprietor of the famed Gris- Commodore Anderson was re-elected broadened hi s horizons and brought him wold Inn and Chairman of the Connecti- Vice Chairman for Historic Ships and to an understanding of the seafaring of cut River Museum Board of Trustees, Sail Training, Alan G. Choate as Vice all nations, and people of all heritages. &quot;I had just been e lected a Trustee ofNMHS. Chairman for Plans; and James Ean Vice came to love them ,&quot; he said, summing Other trustees elected to the Board of Chairman for Marine Education. Peter up an ex perience of schooners, tankers Trustees in an uncontested but enthusi- Stanford was re-relected as President, and tugs-and of the people who sail in astic election were: Norbert S. Hill, Jr., continuing his service as paid staff chief them. &quot;That&#39;s what keeps me going toExecutive Director of the American for NMHS, and Norma Stanford, also a day.&quot; Indi an Science &amp; Engineering Society staff member as Managing Editorof Sea Jay Bolton of the US Tall Ships in Boulder, Colorado; Ms. Truda C. History, was elected Vice Pres ident. Foundation spoke of the Soviet-Ameri Jewett, Public Affairs Director of the Under this arrangement, the President is can crui se aboard the tall ship Druzhba, Children&#39;s Aid Society, of New York; a trustee, who also happens to be the involving cadets from American mari and James P. Marenakos, proprietor of chief paid staff person; the Vice Presi- time academies in a working program Quester Galleries, of Stonington, Con- dent is a non-trustee staff person who with Soviet cadets (see page 31 ). And he necticut. Re-elected were Commodore nonetheless exerts authority accountable spoke of the Foundation&#39;s plan to build Henry H. Anderson, Jr., C hairman directly to the Board of Trustees. an American ship for thi s work (see SH Emeritus of the American Sail Training Richardo Lopes, President of Pfiefer 54, p 13). Ben Clarkson and Bob EldAssociation and Vice Chai rman of the Lopes, was elected Secretary, and Tho- ridge spoke of their work to save the NMHS; Karl Kortum, Chief Curator of mas J. Gochberg of New York was Christeen, the oyster sloop the NMHS the Maritime National Historic Park of elected Treasurer. helped find a home for at the ConnectiSan Francisco and Chairman Emeritus Com mittee C hairmen were then cut River Museum (see SH 53, p39). The of the NMHS; and Captain Robert J. named by Chairman Meyer as follows: Christeen, of course, was there for all Lowen, International President of the Advisory Council, Frank 0. Braynard hands to admire, a little denuded with International Organization of Masters, and Melbourne Smith; American Ship afterdeck stripped away, but sitting as Mates &amp; Pilots, of Linthicum Heights, Trust, Henry H. Anderson, Jr. ; Awards, prettily in the water as she did a century Richard L. Rath; Development, Edmund ago in 1883, at the outset of her long, Maryland. With the newly elected or re-elected S. Rumowicz; Plans, Alan G. Choate. hard-working life. trustees in place, the membership meetAnd to add a further dimension to this NMHS members practicall y wrote ing was thereupon adjourned, and a brief the book on sav ing hi storic ships-and experience, the late Barclay Warburton &#39; s pro-forma meeting of the trustees was on all the interest that cluster round them. lovely brigantine Black Pearl came up he ld for the purpose of electing officers. It&#39; s a book they go on writing, working the river, graceful as a ballerina coming Officers are elected by trustees, and under to deepen as well as extend the message. on stage, completely distracting everyour system thi s is done at an open meet- A shining chapter was added that Satur- one &#39; s attention fro m the speakers. We, ing under the eyes of the membership, day in the testimony of Richard Monette and they, forgave her, however, and with the members free to ask questions of Senator Inouye &#39; s staff- a talk we&#39;ve swarmed quite willingly across her decks of the Board of Trustees. reprinted on page 8 of thi s Sea History. to swap tall tales with Captain Robert Schuyler M. Meyer, Jr., Chairman of Joe Cardozo reported on the sailing Rustchak, who brought severa l friends the Edwin Gould Foundation for Chil- of the Ernestina , a schooner for all sea- and members in crew, along with greetdren in New York, past Vice Chairman sons if ever there was one, and Captain ings from Jakob Isbrandtsen and the for Education of the NMHS, was there- James Lopes , fatherofNMHS Secretary gang working to restore the Wavertree at upon unanimously elected Chairman, Richardo Lopes and a leader of the Cape South Street Seaport Museum in New