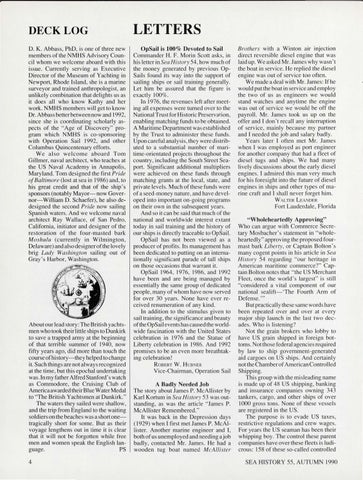 DECK LOG D. K. Abbass, PhD, is one of three new members of the NMHS Advisory Council whom we welcome aboard with this issue. Currently serving as Executive Director of the Museum of Yachting in Newport, Rhode Island , she is a marine surveyor and trained anthropologist, an unlikely combination that delights us as it does all who know Kath y and her work. NMHS members will get to know Dr. Abbass better between now and 1992, since she is coordinating scholarl y aspects of the &quot;Age of Discovery&quot; program which NMHS is co-sponsoring with Operation Sail 1992, and other Columbus Quincentenary efforts. W e also welcome aboard Tom Gillmer, naval architect, who teaches at the US Naval Academy in Annapolis, Maryland. Tom designed the first Pride of Baltimore (lost at sea in 1986) and , to hi s great credit and that of the ship &#39;s sponsors (notably Mayor- now Governor-William D. Schaefer), he also dedesigned the second Pride now sail ing Spanish waters. And we welcome naval architect Ray Wallace, of San Pedro, California, initiator and designer of the restoration of the four-masted bark M oshulu (currently in Wilming ton , De laware) and also designer of the love!y brig Lady Washington sailing out of Gray&#39;s Harbor, Washington .

About our lead story : The British yachtsmen who took their little ships to Dunkirk to save a trapped army at the beginning of that terrible summer of 1940, now fifty years ago, did more than touch the course of hi story-they helped to change it. Such things are not al ways recognized at the time, but this epochal undertaking was. In my father Alfred Stanford&#39;s watch as Commodore, the Cruising Club of America awarded their Blue Water Medal to &quot;The British Yachtsmen at Dunkirk.&quot; The waters they sailed were shall ow, and the trip from England to the waiting soldiers on the beaches was a short onetragically short for some. But as their voyage lengthens out in time it is clear that it will not be forgotten while free men and women speak the English lanPS guage. 4

LETTERS OpSail is 100% Devoted to Sail Commander H. F. Morin Scott as ks, in hi s letter in Sea History 54, how much of the money generated by prev iou s OpSails found its way into the support of sailing ships or sail training generally . Let him be ass ured that the fi gure is exactl y I 00%. In 1976, the revenues left after meeting all expenses were turned over to the National Trust for Historic Preservation, enabling matching funds to be obtained. A Maritime Department was established by the Trust to admini ster these funds. Upon carefu l analys is, they were distributed to a substanti al number of mari time-orientated projects thro ughout the country, including the South Street Seaport. Significant additi onal multipliers were achi eved on these fund s through matching grants at the local, state, and private levels. Much of these funds were of a seed-money nature, and have developed into important on-going programs on their own in the subsequent years. And so it can be sai d that much of the national and worldwide interest extant today in sail training and the history of our ships is directly traceable to OpSail. OpSail has not been viewed as a producer of profits. Its management has been dedi cated to putting on an internationally significant parade of tall ships on those occasions that warrant it. OpSail 1964, 1976, 1986, and 1992 have been and are being managed by essenti ally the same group of dedicated people, many of whom have now served for over 30 years. None have ever received renumeration of any kind. In addition to the stimulu s given to sai l training, the signifi cance and beauty of the OpSail events has caused the worldwide fascination with the United States celebration in 1976 and the Statue of Liberty celebration in 1986. And 1992 promises to be an even more breathtaking celebration! R OBERT

A Badly Needed Job The story about James P. McAlli ster by Karl Kortum in Sea History 53 was outstanding, as was the article &quot;James P . McAllister Remembered.&quot; It was back in the Depression days (1929) when I first met James P. McAlli ster. Another marine engineer and I, both ofus unemployed and needing a job badly , contacted Mr. James. He had a wooden tug boat named McA llister

Brothers with a Winton air injection direct reversible diesel engine that was laid up. We asked Mr.Jam es why wasn&#39;t the boat in service. He repli ed the diesel engine was out of servi ce too often. We made a deal with Mr. James: Ifhe would put the boat in service and employ the two of us as engineers we wo uld stand watches and anytime the eng ine was out of serv ice we wo uld be off the payroll. Mr. James took us up on the offer and I don &#39; t recall any interrupti on of serv ice, mainly because my partner and I needed the job and sa lary badly. Years later I often met Mr. James when I was employed as port engineer for another company that had a fl eet of diesel tugs and ships. We had many lively discuss ions about the earl y diesel engines. I adm ired thi s man very much fo r hi s fores ight into the future of diesel engi nes in ships and other types of marine craft and I shall never fo rget him . WALTER L EANDER

&quot; Wholeheartedly Approving&quot; Who can argue with Commerce Secretary Mosbacher &#39;s statement in &quot;w holehearted ly&quot; approvi ng the proposed fourmast bark Liberty, or Captain Bo lton&#39;s many cogent points in hi s article in Sea History 54 regarding &quot;our heritage in American maritime commerce?&quot; Captain Bolton notes that &quot;the US Merchant Fleet, once the world &#39;s largest&quot; is still &quot;considered a vital component of our national sea lift- &#39;The Fourth Arm of Defense.&quot;&#39; But practical Iy these same words have been repeated over and over at every major ship lau nch in the last two decades. Who is li steni ng? Not the grain brokers who lobby to have US grain shipped in foreign bottoms. Not those federal agencies required by law to ship government-generated aid cargoes on US ships. And certainl y not the Chamberof American Controlled Shipping. This group with the misleading name is made up of 48 US shipping, banking and insurance companies owning 343 tankers, cargo, and other ships of over I000 gross ton s. None of these vessels are regi stered in the US. T he purpose is to evade US taxes , restrictive regulations and crew wages. For years the US seaman has been the ir whipping boy. The control these parent compan ies have over these fleets is ludicrous: 158 of these so-called controll ed SEA HISTORY 55, AUTUMN 1990