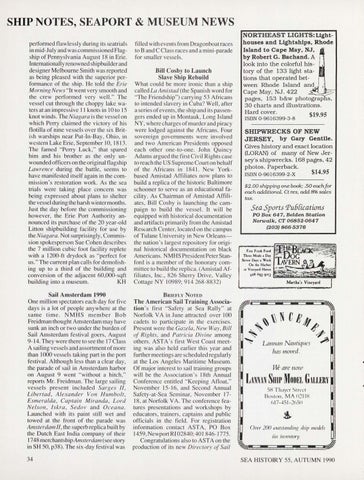 SHIP NOTES, SEAPORT &amp; MUSEUM NEWS performed flawlessly during its seatrials in mid-July and was commissioned Flagship of Pennyslvania August 18 in Erie. Internationally renowned shipbuilderand designer Melbourne Smith was reported as being pleased with the superior performance of the ship. He told the Erie Morning News &quot;It went very smooth and the crew performed very well.&quot; The vessel c ut through the choppy lake waters at an impressive 11 knots in I 0 to IS knot winds. The Niagara is the vessel on which Perry claimed the victory of his flotilla of nine vessels over the six British warships near Put-In-Bay, Ohio, in western Lake Erie, September I 0, 1813. The famed &quot;Perry Luck,&quot; that spared him and his brother as the only unwounded officers on the original flagship Lawrence during the battle, seems to have manifested itself again in the commission&#39;s restoration work. As the sea trials were taking place concern was being expressed about plans to shelter the vessel during the harsh winter months. Just the day before the commissioning however, the Erie Port Authority announced its purchase of the 20 year-old Litton sh ipbuilding facility for use by the Niagara. Not surprisingly, Commission spokesperson Sue Cohen describes the 7 million cubic foot facility replete with a 1200-ft drydock as &quot; perfect for us.&quot; The current plan calls for demolishing up to a third of the building and conversion of the adjacent 60,000-sqft building into a museum . KH

Bill Cosby to Launch Slave Ship Rebuild What could be more ironic than a ship called La Amistad (the Spanish word for &quot;The Friendship&quot;) carry ing S3 Africans to intended slavery in Cuba? Well, after a series of events, the ship and its passengers ended up in Montauk , Long Island NY, where charges of murder and piracy were lodged against the Africans. Four sovereign governments were involved and two American Presidents opposed each other one-to-one. John Quincy Adams argued the first Civil Rights case to reach the US Supreme Courton behalf of the Africans in 1841. New Yorkbased Amistad Affil iates now plans to build a replica of the hi storic Baltimore schooner to serve as an educational facility. As Chairman of Amistad Affiliates, Bill Cosby is launching the campaign to build the vessel. It will be equipped with historical documentation and artifacts primarily from the Amistad Research Center, located on the campus of Tulane University in New Orleansthe nation &#39;s largest repository for original historical documentation on black Americans. NMHS President Peter Stanford is a member of the honorary committee to build the replica. (Am istad Affiliates , Inc., 826 Sherry Drive, Valley Cottage NY 10989; 914 268-8832)

Sail Amsterdam 1990 One million spectators each day for five days is a lot of people anywhere at the same time. NMHS member Bob Freidman thought Amsterdam may have sunk an inch or two under the burden of Sail Amsterdam festival goers, August 9-14. They were there to see the 17 Class A sailing vessels and assortment of more than 1000 vessels taking part in the port festival. Although less than a clear day, the parade of sa il in Amsterdam harbor on August 9 went &quot; without a hitch ,&quot; reports Mr. Freidman. The large sailing vessels prese nt in c luded Sarges II , Libertad, Alexander Von Humb olt, Esmeralda , Captain Miranda , Lord Nelson , Iskra , Sedov and Oceana . Launched with its paint still wet and towed at the front of the parade was Amsterdam//, the superb replica built by the Dutch East India company of their 1748 merchantshipAmsterdam (see story in SH SO, p38). The six-day festival was

The American Sail Training Association &#39;s first &quot;Safety at Sea Rally&quot; at Norfolk VA in June attracted over I 00 cadets to participate in the exercises. Present were the Gaze/a, New Way, Bill of Rights, and Patricia Divine among others. ASTA&#39;s first West Coast meeting was also held earlier this year and further meetings are scheduled regularly at the Los Angeles Maritime Museum . Of major interest to sail training groups will be the Association &#39;s 18th Annual Conference entitled &quot; Keeping Afloat,&quot; November IS-16, and Second Annual Safety-at-Sea Seminar, November 1718, at Norfolk VA. The conference features presentations and workshops by educators, trainers, captains and public officials in the field. For registration information contact ASTA, PO Box 14S9,NewportRI02840;40 1846- 1775. Congratulations also to AST A on the p:-oduction of its new Directory of Sail

filled with events from Dragonboatraces to Band C Class races and a mini-parade for smaller vessels.