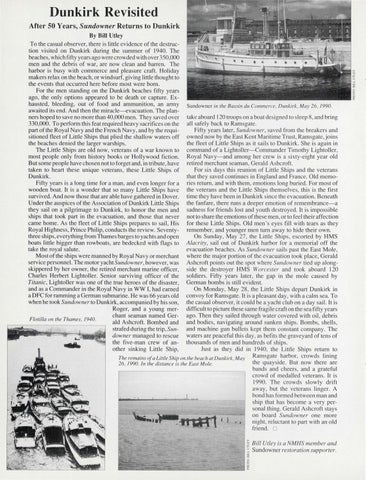 Dunkirk Revisited After 50 Years, Sundowner Returns to Dunkirk By Bill Utley To the casual observer, there is little evidence of the destruction visited on Dunkirk during the summer of 1940. The beaches, which fifty years ago were crowded with over 350,000 men and the debris of war, are now clean and barren. The harbor is busy with commerce and pleasure craft. Holiday makers relax on the beach, or windsurf, giving little thought to the events that occurred here before most were born. For the men standing on the Dunkirk beaches fifty years ago, the only options appeared to be death or capture. Exhausted, bleeding, out of food and ammunition, an army awaited its end. And then the miracle--evacuation. The planners hoped to save no more than 40,000 men. They saved over 330,000. To perform this feat required heavy sacrifices on the part of the Royal Navy and the French Navy, and by the requisitioned fleet of Little Ships that plied the shallow waters off the beaches denied the larger warships. The Little Ships are old now, veterans of a war known to most people only from history books or Hollywood fiction. But some people have chosen not to forget and, in tribute, have taken to heart these unique veterans, these Little Ships of Dunkirk. Fifty years is a long time for a man, and even longer for a wooden boat. It is a wonder that so many Little Ships have survived. And now those that are able have gathered in Dover. Under the auspices of the Association of Dunkirk Little Ships they sai l on a pilgrimage to Dunkirk, to honor the men and sh ips that took part in the evacuation, and those that never came home. As the fleet of Little Ships prepares to sail, His Royal Highness, Prince Philip, conducts the review. Seventythree ships, everything from Thames barges to yachts and open boats little bigger than rowboats, are bedecked with flags to take the royal salute. Most of the ships were manned by Royal Navy or merchant service personnel. The motor yacht Sundowner, however, was skippered by her owner, the retired merchant marine officer, Charles Herbert Lightoller. Senior surviving officer of the Titanic, Lightoller was one of the true heroes of the disaster, and as a Commander in the Royal Navy in WW I, had earned a DFC for ramming a German submarine. He was 66 years old when he took Sundowner to Dunkirk, accompanied by his son, Roger, and a young merchant seaman named GerFlotilla on the Thames, 1940. ald Ashcroft. Bombed and strafed during the trip, Sundowner managed to rescue the five-man crew of another sinking Little Ship,

take aboard 120 troops on a boat designed to sleep 8, and bring all safely back to Ramsgate. Fifty years later, Sundowner, saved from the breakers and owned now by the East Kent Maritime Trust, Ramsgate, joins the fleet of Little Ships as it sail s to Dunkirk. She is again in command of a Lightoller-Commander Timothy Lightoller, Royal Navy- and among her crew is a sixty-eight year old retired merchant seaman, Gerald Ashcroft. For six days this reunion of Little Ships and the veterans that they saved continues in England and France. Old memories return , and with them, emotions long buried. For most of the veterans and the Little Ships themselves , this is the first time they have been in Dunkirk since the evacuation. Beneath the fanfare , there runs a deeper emotion of remembrance-a sadness for friends lost and youth destroyed. It is impossible not to share the emotions of these men, or to feel their affection for these Little Ships. Old men &#39;s eyes fill with tears as they remember, and younger men turn away to hide their own. On Sunday, May 27 , the Little Ships, escorted by HMS Alacrity, sail out of Dunkirk harbor for a memorial off the evacuation beaches. As Sundowner sail s past the East Mole, where the major portion of the evacuation took place, Gerald Ashcroft points out the spot where Sundowner tied up alongside the destroyer HMS Worcester and took aboard 120 soldiers. Fifty years later, the gap in the mole caused by German bombs is still evident. On Monday, May 28 , the Little Ships depart Dunkirk in convoy for Rams gate. It is a pleasant day, with a calm sea. To the casual observer, it could be a yacht club on a day sail. It is difficult to picture these same fragile craft on the sea fifty years ago. Then they sailed through water covered with oil , debris and bodies, navigating around sunken ships. Bombs, shells, and machine gun bullets kept them constant company. The waters are peaceful this day, as befits the graveyard of tens of thousands of men and hundreds of ships. Just as they did in 1940, the Little Ships return to Ramsgate harbor, crowds lining The remains of a Little Ship on the beach at Dunkirk, May the quayside. But now there are 26 , 1990. In the distance is the East Mole. bands and cheers , and a grateful crowd of medalled veterans. It is 1990. The crowds slowly drift away, but the veterans linger. A bond has formed between man and ship that has become a very personal thing. Gerald Ashcroft stays on board Sundowner one more J J. ~ night, reluctant to part with an old friend . D A

Bill Utley is a NMHS member and Sundowner restoration supporter.