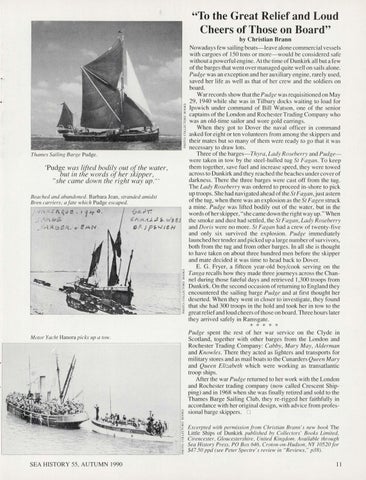 "To the Great Relief and Loud Cheers of Those on Board" by Christian Brann Nowadays few sailing boats-leave alone commercial vessels with cargoes of 150 tons or more- would be considered safe without a powerful engine. At the time of Dunkirk all but a few of the barges that went over managed quite well on sails alone. Pudge was an exception and her auxiliary engine, rarely used, saved her life as well as that of her crew and the soldiers on board. War records show that thePudge was requisitioned on May ,,, 29, 1940 while she was in Tilbury docks waiting to load for g Ipswich under command of Bill Watson, one of the senior ~ captains of the London and Rochester Trading Company who was an o ld-time sai lor and wore gold earrings. j When they got to Dover the naval officer in command 8 asked for eight orten volunteers from among the skippers and Â§ their mates but so many of them were ready to go that it was it necessary to draw lots. Three of the barges-Thyra, lady Roseberry and Pudgewere taken in tow by the steel-hulled tug St Fagan. To keep them together, save fuel and increase speed, they were towed across to Dunkirk and they reached the beaches under cover of darkness. There the three barges were cast off from the tug. The lady Roseberry was ordered to proceed in-shore to pick up troops. She had navigated ahead of the Sr Fagan , just astern of the tug, when there was an explosion as the St Fagen struck a mine. Pudge was lifted bodily out of the water, but in the words of her skipper, "she came down the right way up." When the smoke and dust had settled, the Sr Fagan , lady Roseberry and Doris were no more. St Fagan had a crew of twenty-five and only six survived the explosion. Pudge immediately launched her tender and picked up a large number of survivors, both from the tug and from other barges. In all she is thought to have taken on about three hundred men before the skipper and mate decided it was time to head back to Dover. E. G. Fryer, a fifteen year-old boy/cook serving on the Tanga recalls how they made three journeys across the Channel during those fateful days and retrieved 1,300 troops from Dunkirk. On the second occasion of returning to England they encountered the sai ling barge Pudge and at first thought her deserted. When they went in closer to investigate, they found that she had 300 troops in the hold and took her in tow to the great relief and loud cheers of those on board. Three hours later they arrived safely in Ramsgate.

'Pudge was lifted bodily out of the water,

but in the words of her skipper, "she came down the right way up."'

Beached and abandoned. Barbara Jean , stranded amidst Bren carriers; a fate which Pudge escaped. , .:: A G 1.11~.,

Motor Yacht Hanorapicks up a tow.

Pudge spent the rest of her war service on the C lyde in Scotland, together with other barges from the London and Rochester Trading Company: Cabby, Mary May , Alderman and Knowles. There they acted as lighters and transports for military stores and as mail boats to the Cunarders Queen Mary and Queen Elizabeth which were working as transatlantic troop ships. After the war Pudge returned to her work with the London and Rochester trading company (now called Crescent Shipping) and in 1968 when she was finally retired and sold to the Thames Barge Sailing Club, they re-rigged her faithfully in accordance with her original design, with advice from professional barge skippers. D Excerpted with permission from Christian Brann' s new book The Little Ships of Dunkirk published by Collectors' Books Limited,