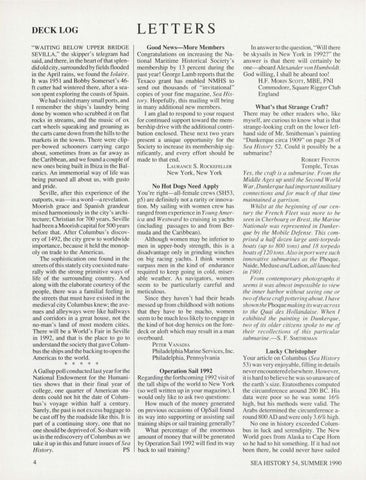 said, and there, in the heart of that splendid old city, surrounded by fields flooded in the April rains, we found the /olaire. It was 1951 and Bobby Somerset&#39;s 46ft cutter had wintered there, after a season spent exploring the coasts of Spain. We had visited many small ports, and I remember the ships&#39;s laundry being done by women who scrubbed it on flat rocks in streams, and the music of ox cart wheels squeaking and groaning as the carts came down from the hills to the markets in the towns. There were clipper-bowed schooners carrying cargo about, sometimes from as far away as the Caribbean, and we found a couple of new ones being built in Ibiza in the Balearics. An immemorial way of life was being pursued all about us, with gusto and pride. Seville, after this experience of the outports, was-in a word-a revelation. Moorish grace and Spanish grandeur mixed harmoniously in the city&#39;s architecture; Christian for 700 years, Seville had been a Moorish capital for 500 years before that. After Columbus&#39;s discovery of 1492, the city grew to worldwide importance, because it held the monopoly on trade to the Americas. The sophistication one found in the streets of this stately city coexisted naturally with the strong primitive ways of life of the surrounding country. And along with the elaborate courtesy of the people, there was a familial feeling in the streets that must have existed in the medieval city Columbus knew; the avenues and alleyways were like hallways and corridors in a great house, not the no-man&#39;s land of most modern cities. There will be a World&#39;s Fair in Seville in 1992, and that is the place to go to understand the society that gave Columbus the ships and the backing to open the Americas to the world.

A Gal I up pol I conducted last year for the National Endowment for the Humanities shows that in their final year of college, one quarter of American students could not hit the date of Columbus&#39;s voyage within half a century. Surely, the past is not excess baggage to be cast off by the roadside like this. It is part of a continuing story, one that no one should be deprived of. So share with us in the rediscovery of Columbus as we take it up in this and future issues of Sea History. PS

LETTERS Good News-More Members Congratulations on increasing the National Maritime Historical Society&#39;s membership by 13 percent during the past year! George Lamb reports that the Texaco grant has enabled NMHS to send out thousands of &quot;invitational&quot; copies of your fine magazine, Sea History. Hopefully , this mailing will bring in many additional new members. I am glad to respond to your request for continued support toward the membership drive with the additional contribution enclosed. These next two years present a unique opportunity for the Society to increase its membership significantly, and every effort should be made to that end. LAURANCE S. ROCKEFELLER New York, New York

No Hot Dogs Need Apply You&#39;re right-all-female crews (SH53 , p5) are definitely not a rarity or innovation. My sailing with women crew has ranged from experience in Young America and Westward to cruising in yachts (including passages to and from Bermuda and the Caribbean). Although women may be inferior to men in upper-body strength, this is a disadvantage only in grinding winches on big racing yachts. I think women surpass men in the kind of endurance required to keep going in cold, miserable weather. As navigators, women seem to be particularly careful and meticulous. Since they haven&#39;t had thejr heads messed up from childhood with notions that they have to be macho, women seem to be much less likely to engage in the kind of hot-dog heroics on the foredeck or aloft which may result in a man overboard. PETER V ANADIA Philadelphia Marine Services, Inc. Philadelphia, Pennsylvania

Operation Sail 1992 Regarding the forthcoming 1992 visit of the tall ships of the world to New York (so well written up in your magazine), I would only like to ask two questions: How much of the money generated on previous occasions of OpSail found its way into supporting or assisting sail training ships or sail training generally? What percentage of the enormous amount of money that wi II be generated by Operation Sail 1992 will find its way back to sail training?

In answer to the question, &quot;Will there be skysails in New York in 1992?&quot; the answer is that there will certainly be one-aboard Alexander von Humboldt. God willing, I shall be aboard too! H.F. MORIN SCOTT, MBE, FNI Commodore, Square Rigger Club England

What&#39;s that Strange Craft? There may be other readers who, like myself, are curious to know what is that strange-looking craft on the lower lefthand side of Mr. Smitheman &#39;s painting &quot;Dunkerque circa 1909&quot; on page 28 of Sea History 52. Could it possibly be a submarine? ROBERT FENTON Temple, Texas Yes, the craft is a submarine. From the Middle Ages up until the Second World War, Dunkerque had important military connections and for much of that time maintained a garrison. Whilst at the beginning of our century the French Fleet was more to be seen in Cherbourg or Brest, the Marine Nationale was represented in Dunkerque by the Mobile Defense. This comprised a half dozen large anti-torpedo boats (up to 800 tons) and 18 torpedo boats of120 tons. Also in port were such innovative submarines as the Phoque, Naide, MeduseandLudion,all launched in 1901. From contemporary photographs it seems it was almost impossible to view the inner harbor without seeing one or two ofthese craft pottering about. I have shown the Phoque making its way across to the Quai des Hollandaise. When I exhibited the painting in Dunkerque, two of its older citizens spoke to me of their recollections of this particular submarine.-S. F. SMITHEMAN

Lucky Christopher Your article on Columbus (Sea History 53) was very enjoyable, filling in details never encountered elsewhere. However, it is hard to believe he was so unaware of the earth&#39;s size. Eratosthenes computed the circumference around 200 BC. His data were poor so he was some 16% high, but his methods were valid. The Arabs determined the circumference around 800 AD and were only 3.6% high. No one in history exceeded Columbus in luck and serendipity. The New World goes from Alaska to Cape Horn so he had to hit something. If it had not been there, he could never have sailed SEA HISTORY 54, SUMMER 1990