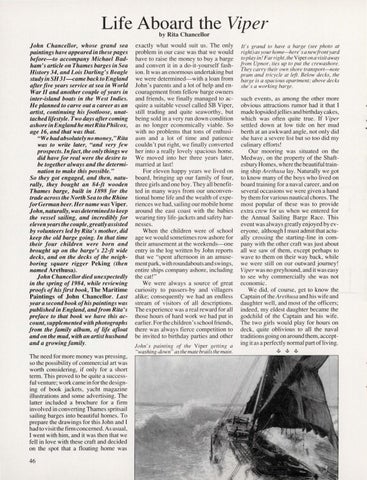 Life Aboard the Viper by Rita Chancellor

John Chancellor, whose grand sea paintings have appeared in these pages before-to accompany Michael Badham&#39;s article on Thames barges in Sea History 34, and Lois Darling&#39;s Beagle study in SH 31-came back to England after five years service at sea in World War II and another couple of years in inter-island boats in the West Indies. He planned to carve out a career as an artist, continuing his footloo se, unattached lifestyle. Two days after coming ashore in England he metRitaPhilcox, age 16, and that was that. &quot; We had absolutely no money,&quot; Rita was to write later, &quot;and very f ew prospects. In fact, the only things we did have for real were the desire to be together always and the determination to make this possible.&quot; So they got engaged, and then, naturally, they bought an 84-ft wooden Thames barge, built in I 898 for the trade across the North Sea to the Rhine for German beer. Her name was Viper. John, naturally, was determined to keep the vessel sailing, and incredibly for eleven years the couple, greatly assisted by volunteers led by Rita&#39;s mother, did keep the old barge going. In that time their four children were born and brought up on the barge&#39;s 22-ft wide decks, and on the decks of the neighboring square rigger Peking (then named Arethusa). John Chancellor died unexpectedly in the spring of 1984, while reviewing proofs of his first book, The Maritime Paintings of John Chancellor. Last year a second book ofhis paintings was published in England, and from Rita&#39;s preface to that book we have this account, supplemented with photographs from the family album, of life afloat and on the mud, with an artist husband and a growing family. The need for more money was pressing, so the possibility of commercial art was worth considering, if only for a short term. This proved to be quite a successful venture; work came in for the designing of book jackets, yacht magazine illustrations and some advertising. The latter included a brochure for a firm involved in converting Thames spritsai l sailing barges into beautiful homes. To prepare the drawings for thi s John and I had to visit the firm concerned. As usual, I went with him, and it was then that we fell in love with these craft and decided on the spot that a floating home was

exactly what would suit us. The only problem in our case was that we would have to raise the money to buy a barge and convert it in a do-it-yourself fashion. It was an enormous undertaking but we were determined-with a loan from John &#39;s parents and a lot of help and encouragement from fe llow barge owners and friends , we finally managed to acquire a suitable vessel called SB Viper, still trading and quite seaworthy, but being sold in a very run down condition as no longer economically viable. So with no problems that tons of enthusiasm and a lot of time and patience couldn &#39; t put right, we finally converted her into a really lovely spacious home. We moved into her three years later, married at last! For eleven happy years we lived on board, bringing up our family of four, three girls and one boy. They all benefitted in many ways from our unconventional home life and the wealth of experiences we had, sailing our mobile home around the east coast with the babies wearing tiny life-jackets and safety harnesses. When the chi ldren were of school age we would sometimes row ashore for their amusement at the weekends--one entry in the log written by John reports that we &quot;spent afternoon in an amusement park, with roundabouts and swings, entire ships company ashore, including the cat!&quot; We were always a source of great curiosity to passers-by and villagers alike; consequently we had an endless stream of visitors of all descriptions . The experience was a real reward for all those hours of hard work we had put in earlier. For the children&#39;s school friends, there was always fierce competition to be invited to birthday parties and other John &#39;s painting of the Viper getting a &quot;washing-down&quot; as the mate brails the main.

It&#39; s grand to have a barge (see photo at right)as your home-here&#39; sa newfront yard to play in! Far right, the Viper on a visit away from Upno r, ties up to put the crewashore. They carry their own shore transport--note pram and tricycle at left. Below decks, the barge is a spacious apartment; above decks she&#39;s a working barge.

such events, as among the other more obvious attractions rumor had it that I made lopsided jellies and birthday cakes, which was often quite true. If Viper settled down at low tide on her mud berth at an awkward angle, not onl y did she have a severe li st but so too did my cu linary efforts! Our mooring was situated on the Medway, on the property of the Shaftesbury Homes, where the beautiful training ship Arethusa lay. Naturally we got to know many of the boys who lived on board training for a naval career, and on several occasions we were given a hand by them fo r various nautical chores. The most popular of these was to provide extra crew for us when we entered for the Annual Sailing Barge Race. This event was always greatly enjoyed by everyone, although I must admit that actually crossi ng the starting-line in company with the other craft was just about all we saw of them, except perhaps to wave to them on their way back, while we were sti ll on our outward journey! Viper was no greyhound, and it was easy to see why commercially she was not economic. We did, of course, get to know the Captai n oftheArethusa and his wife and daughter well , and most of the officers; indeed, my eldest daughter became the godchild of the Captain and hi s wife. The two girls would play for hours on deck, quite oblivious to all the naval traditions going on around them, accepting it as a perfectly normal part of li ving.