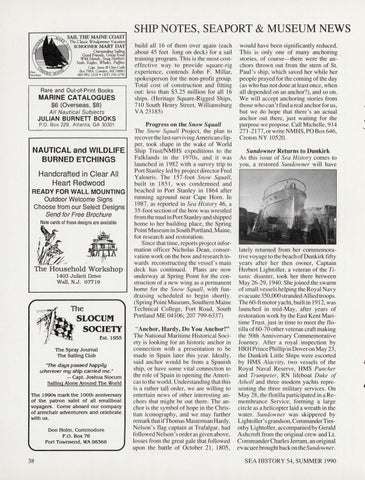 The SLOCUM SOCIETY est. 1955 The Spray Journal The Sailing Club &#39;&#39;The days passed happily wherever my ship carried me.&quot;

-- capt. Joshua Slocum Sailing Alone Around The World The 1990s mark the lOOth anniversary of the patron saint of all smallboat voyagers. Come aboard our company of armchair adventurers and celebrate with us. Don Holm, Commodore P.O. Box76 Port Townsend, WA 98368 38

build all 16 of them over again (each about 45 feet long on deck) for a sail training program. This is the most costeffective way to provide square-rig experience, contends John F. Millar, spokesperson for the non-profit group. Total cost of construction and fitting out: less than $3.25 million for all 16 ships. (Heritage Square-Rigged Ships, 710 South Henry Street, Williamsburg VA 23185)

Progress on the Snow Squall The Snow Squall Project, the plan to recover the last surviving American clipper, took shape in the wake of World Ship Trust/NMHS expeditions to the Falklands in the 1970s, and it was launched in 1982 with a survey trip to Port Stanley led by project director Fred Yalouri s. The 157-foot Sno w Squall, built in 1851 , was condemned and beached in Port Stanley in 1864 after running aground near Cape Hom. In 1987, as reported in Sea History 46, a 35-foot section of the bow was wrestled from the mud in Port Stanley and shipped home to her building place, the Spring Point Museum in South Portland, Maine, for research and restoration. Since that time, reports project information officer Nicholas Dean, conservation work on the bow and research towards reconstructing the vessel &#39; s main deck has continued. Plans are now underway at Spring Point for the construction of a new wing as a permanent home for the Snow Squall, with fundraising scheduled to begin shortl y. (Spring Point Museum, Southern Maine Technical College, Fort Road, South Portland ME 04106; 207 799-6337) &quot;Anchor, Hardy, Do You Anchor!&quot; The National Maritime Historical Society is looking for an historic anchor in connection with a presentation to be made in Spain later this year. Ideally, said anchor would be from a Spanish ship, or have some vital connection to the role of Spain in opening the Americas to the world. Understanding that this is a rather tall order, we are willing to entertain news of other interesting anchors that might be out there. The anchor is the symbol of hope in the Christian iconography, and we may further remark that if Thomas Masterman Hardy, Nelson &#39;s flag captain at Trafalgar, had followed Nel son &#39;s order as given above, losses from the great gale that followed upon the battle of October 21 , 1805,

would have been significantly reduced. This is only one of many anchoring stories, of course-there were the anchors thrown out from the stem of St. Paul &#39;s ship, which saved her while her people prayed for the coming of the day (as who has not done at least once, when all depended on an anchor?), and so on. We will accept anchoring stories from those who can &#39; t find a real anchor for us, but we do hope that there&#39; s an actual anchor out there, just waiting for the purpose we propose. Call Michelle, 914 271-2177, or write NMHS , PO Box 646, Croton NY 10520.

Sundowner Returns to Dunkirk As thi s issue of Sea History comes to you, a restored Sundowner will have

lately returned from her commemorative voyage to the beach of Dunkirk fifty years after her then owner, Captain Herbert Lightoller, a veteran of the Titanic di saster, took her there between May 26-29, 1940. She joined the swarm of small vessels helping the Royal Navy evacuate 350,000 stranded Allied troops. The 60-ft motor yacht, built in 1912, was launched in mid-May, after years of restoration work by the East Kent Maritime Trust, just in time to meet the flotilla of 60-70 other veteran craft making the 50th Anniversary Commemorative Journey. After a royal inspection by HRH Prince Phillip in Doveron May23, the Dunkirk Little Ships were escorted by HMS Alacrity, two vessels of the Royal Naval Reserve, HMS Puncher and Trumpeter, RN lifeboat Duke of Atholl and three modem yachts representing the three military services. On May 28, the flotilla participated in a Remembrance Service, forming a large circle as a helicopter laid a wreath in the water. Sundowner was skippered by Lightoller&#39;s grandson, Commander Timothy Lightoller, accompanied by Gerald Ashcroft from the original crew and Lt. Commander Charles Jerram, an original evacuee brought back on the Sundowner. SEA HISTORY 54, SUMMER 1990