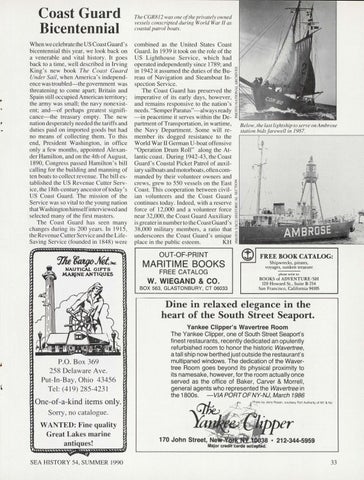 The CGR812 was one of the privately owned vessels conscripted during World War II as coastal patrol boats.

When we celebrate the US Coast Guard&#39;s bicentennial this year, we look back on a venerable and vital history . It goes back to a time, well described in Irving King&#39;s new book The Coast Guard Under Sail, when America&#39;s independence was troubled-the government was threatening to come apart; Britain and Spain still occupied American territory; the army was small; the navy nonexistent; and---0f perhaps greatest significance-the treasury empty. The new nation desperately needed the tariffs and duties paid on imported goods but had no means of collecting them. To this end, President Washington, in office only a ·few months, appointed Alexander Hamilton, and on the 4th of August, 1890, Congress passed Hamilton&#39;s bill calling for the building and manning of ten boats to collect revenue. The bill established the US Revenue Cutter Service, the 18th-century ancestorof today &#39;s US Coast Guard. The mission of the Service was so vital to the young nation that Washington himselfinterviewed and selected many of the first masters. The Coast Guard has seen many changes during its 200 years. In 1915, the Revenue Cutter Service and the Lifesaving Service (founded in 1848) were

combined as the United States Coast Guard. In 1939 it took on the role of the US Lighthouse Service, which had operated independently since 1789; and in 1942 it assumed the duties of the Bureau of Navigation and Steamboat Inspection Service. The Coast Guard has preserved the imperative of its early days, however, and remains responsive to the nation&#39;s needs. &quot;Semper Paratus&quot;-always ready -in peacetime it serves within the Department of Transportation, in wartime, the Navy Department. Some will remember its dogged resistance to the World War II German U-boat offensive &quot;Operation Drum Roll&quot; along the Atlantic coast. During 1942-43, the Coast Guard&#39;s Coastal Picket Patrol of auxiliary sailboats and motorboats, often commanded by their volunteer owners and crews, grew to 550 vessels on the East Coast. Thi s cooperation between civilian volunteers and the Coast Guard continues today . Indeed, with a reserve force of 12,000 and a volunteer force near 32,000, the Coast Guard Auxiliary is greater in numberto the Coast Guard&#39;s 38,000 military members, a ratio that underscores the Coast Guard&#39;s unique place in the public esteem. KH

Below, the last lightship to serve on Ambrose station bids farewell in 1987.

Dine in relaxed elegance in the heart of the South Street Seaport. Yankee Clipper&#39;s Wavertree Room

One-of-a-kind items only. Sorry, no catalogue.

The Yankee Clipper, one of South Street Seaport&#39;s finest restaurants, recently dedicated an opulently refurbished room to honor the historic Waverlree, a tall ship now berthed just outside the restaurant&#39;s multipaned windows. The dedication of the Wavertree Room goes beyond its physical proximity to its namesake, however, for the room actually once served as the office of Baker, Carver &amp; Morrell, general agents who represented the Waverlree in the 1800s. -VIA PORT OF NY-NJ, March 1986 . ,:,,f&#39; .&#39;J.. ~~t~ by Jerry Rosen, courtesy Port Authority of NY &amp; NJ.