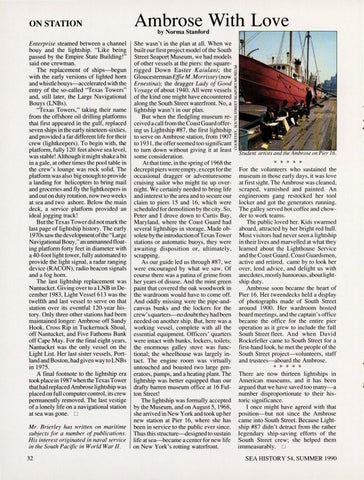 Ambrose With Love by Norma Stanford

Enterprise steamed between a channel bouy and the lightship. &quot;Like being passed by the Empire State Building!&quot; said one crewman. The replacement of ships-begun with the early versions of lighted horn and whistle bouys-accelerated with the entry of the so-called &quot;Texas Towers&quot; and, still later, the Large Navigational Bouys (LNBs). &quot;Texas Towers,&quot; taking their name from the offshore oil drilling platforms that first appeared in the gulf, replaced seven ships in the early nineteen-sixties, and provided a far different life for their crew (lightkeepers). To begin with, the platform, fully 120 feet above sea level, was stable! Although it might shake a bit in a gale, at other times the pool table in the crew&#39;s lounge was rock solid. The platform was also big enough to provide a landing for helicopters to bring mail and groceries and fly the lightkeepers in and out on duty rotation, now two weeks at sea and two ashore. Below the main deck, a service platform provided an ideal jogging track! But the Texas Tower did not mark the last page of lightship history. The early 1970s saw the development of the &quot;Large Navigational Bouy,&quot; an unmanned floating platform forty feet in diameter with a 40-foot light tower, fully automated to provide the light signal, a radar ranging device (RACON), radio beacon signals and a fog horn. The last lightship replacement was Nantucket. GivingovertoaLNB in December 1983, Light Vessel 613 was the twelfth and last vessel to serve on that station over its eventful 120-year history. Only three other stations had been maintained longer: Ambrose off Sandy Hook, Cross Rip in Tuckemuck Shoal, off Nantucket, and Five Fathoms Bank off Cape May. For the final eight years, Nantucket was the only vessel on the Light List. Her last sister vessels, Portland and Boston, had given way to LNBs in 1975. A final footnote to the lightship era took place in 1987 when the Texas Tower that had replaced Ambrose lightship was placed on full computer control, its crew permanently removed. The last vestige of a lonely life on a navigational station at sea was gone. D Mr. Brierley has written on maritime subjects for a number of publications. His interest originated in naval service in the South Pacific in World War II. 32

She wasn&#39;t in the plan at all. When we built our first project model of the South Street Seaport Museum, we had models of other vessels at the piers: the squarerigged Down Easter Kaiulani; the Gloucesterman Effie M. Morrissey (now . Ernestina); the dragger Lady of Good Voyage of about 1940. All were vessels of the kind one might have encountered along the South Street waterfront. No, a lightship wasn&#39;t in our plan. But when the fledgling museum received a call from the Coast Guard offering us Lightship #87, the first lightship to serve on Ambrose station, from 1907 to 1931 , the offer seemed too significant to tum down without giving it at least some consideration. At that time, in the spring of 1968 the decrepit piers were empty, except for the occasional dragger or adventuresome cruising sailor who might tie up overnight. We certainly needed to bring life and interest to the area and to secure our claim to piers 15 and 16, which were scheduled for demolition by the city. So, Peter and I drove down to Curtis Bay, Maryland , where the Coast Guard had several lightships in storage. Made obsolete by the introduction of Texas Tower stations or automatic buoys, they were awaiting disposition or, ultimately , scrapping. As our guide led us through #87 , we were encouraged by what we saw. Of course there was a patina of grime from her years of disuse. And the mint green paint that covered the oak woodwork in the wardroom would have to come off. And oddly missing were the pipe-andcanvas bunks and the lockers for the crew &#39;s quarters-no doubt they had been needed on another ship. But, here was a working vessel, complete with all the essential equipment. Officers&#39; quarters were intact with bunks, lockers, toilets; the enormous galley stove was functional; the wheelhouse was largely intact. The engine room was virtually untouched and boasted two large generators, pumps, and a heating plant. The lightship was better equipped than our drafty barren museum office at 16 Fulton Street! The lightship was formally accepted by the Museum , and on August 5, 1968, she arrived in New York and took up her new station at Pier 16, where she has been in service to the public ever since. Thus this structure--designed to sustain life at sea-became a center fornew life on New York &#39;s rotting waterfront.

***** For the volunteers who sustained the museum in those early days, it was love at first sight. The Ambrose was cleaned, scraped, varnished and painted. An engineroom gang restocked her tool locker and got the generators running. The galley served hot coffee and chowder to work teams. The public loved her. Kids swarmed aboard, attracted by her bright red hull. Most visitors had never seen a lightship in their lives and marvelled at what they learned about the Lighthouse Service and the Coast Guard. Coast Guardsmen, active and retired, came by to look her over, lend advice, and delight us with anecdotes, mostlyhumorous,aboutlightship duty. Ambrose soon became the heart of Pier 16. Her tweendecks held a display of photographs made of South Street around 1900. Her wardroom hosted board meetings, and the captain&#39;s office became the office for the entire pier operation as it grew to include the full South Street fleet. And when David Rockefeller came to South Street for a first-hand look, he met the people of the South Street project-volunteers, staff and trustees-aboard the Ambrose.

There are now thirteen lightships in American museums , and it has been argued that we have saved too many-a number disproportionate to their historic significance. I once might have agreed with that position-but not since the Ambrose came into South Street. Because Lightship #87 didn &#39;t detract from the rather legendary ship-saving efforts of the South Street crew; she helped them immeasurably. D SEA HISTORY 54, SUMMER 1990