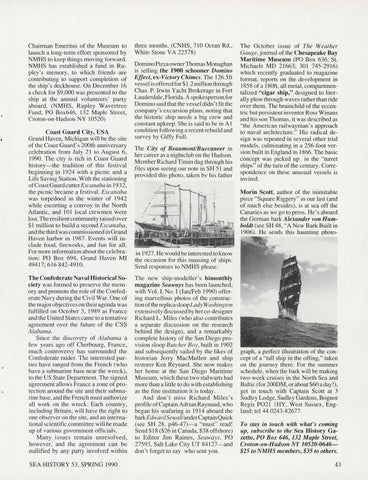 Chairman Emeritus of the Museum to launch a long-term effort sponsored by NMHS to keep things moving forward. NMHS has established a fund in Rupley&#39;s memory, to which friends are contributing to support completion of the ship&#39;s deckhouse. On December 16 a check for $9,000 was presented to the ship at the annual volunteers&#39; party aboard. (NMHS , Rupley Wavertree Fund, PO Box646, 132 Maple Street, Croton-on-Hudson NY 10520) Coast Guard City, USA Grand Haven, Michigan will be the site of the Coast G.u ard&#39;s 200th anniversary celebration from July 21 to August 6, 1990. The city is rich in Coast Guard history-the tradition of this festival beginning in 1924 with a picnic and a Life Saving Station. With the stationing of Coast Guard cutter Escanaba in 193 2, the picnic became a festival. Escanaba was torpedoed in the winter of 1942 while escorting a convoy in the North Atlantic, and 101 local crewmen were lost. The resilient community raised over $1 million to build a second Escanaba, and the third was commissioned in Grand Haven harbor in 1987. Events will include food, fireworks, and fun for all. For more information about the celebration: PO Box 694, Grand Haven MI 49417; 616 842-4910. The Confederate Naval Historical Society was formed to preserve the memory and promote the role of the Confederate Navy during the Civil War. One of the major objectives on their agenda was fulfilled on October 3, 1989 as France and the United States came to a tentative agreement over the future of the CSS Alabama. Since the discovery of Alabama a few years ago off Cherbourg, France, much controversy has surrounded the Confederate raider. The interested parties have ranged from the French (who have a submarine base near the wreck), to the US State Department. The signed agreement allows France a zone of protection around the site and their submarine base, and the French must authorize all work on the wreck. Each country, including Britain, will have the right to one observer on the site, and an international scientific committee will be made up of various government officials. Many issues remain unresolved , however, and the agreement can be nullified by any party involved within SEA HISTORY 53, SPRING 1990

three months. (CNHS , 710 Ocran Rd., White Stone VA 22578) Domino Pizza owner Thomas Monaghan is selling the 1900 schooner Domino Effect, ex-Victory Chimes. The 126.5ft vessel is offered for $1.2 million through Chas. P. Irwin Yacht Brokerage in Fort Lauderdale, Florida. A spokesperson for Domino said that the vessel didn &#39; tfit the company&#39;s excursion plans, noting that the historic ship needs a big crew and constant upkeep. She is said to be in A 1 condition following a recent rebuild and survey by Giffy Full. The City of Beaumont/Buccaneer in her career as a nightclub on the Hudson. Member Richard Timm dug through his files upon seeing our note in SH 51 and provided this photo, taken by his father

The October issue of The Weather Gauge, journal of the Chesapeake Bay Maritime Museum (PO Box 636, St. Michaels MD 21663; 301 745-2916) which recently graduated to magazine format, reports on the development in 1858 of a 180ft, all metal, compartmentalized &quot;cigar ship,&quot; designed to literally plow through waves ratherthan ride over them. The brainchild of the eccentric but persistent inventor Ross Winans and his son Thomas, it was described as &quot;the American railwayman&#39;s approach to naval architecture.&quot; His radical design was repeated in several other trial models, culminating in a 256-foot version built in England in 1866. The basic concept was picked up in the &quot;turret ships&quot; of the turn of the century. Correspondence on these unusual vessels is invited. Morin Scott, author of the inimitable piece &quot;Square Riggery&quot; m our last (and of much else besides), is at sea off the Canaries as we go to press. He&#39;s aboard the German bark Alexander von Humboldt (see SH 48, &quot;A New Bark Built in 1906). He sends this haunting photo-

in 1927. He would be interested to know the occasion for this massing of ships. Send responses to NMHS please. The new ship-modeller&#39;s bimonthly magazine Seaways has been launched, with Vol. I, No. I (Jan/Feb 1990) offering marvellous photos of the construction of the replica sloop Lady Washington extensively discussed by her co-designer Richard L. Miles (who also contributes a separate discussion on the research behind the design), and a remarkably complete history of the San Diego provision sloop Butcher Boy, built in 1902 and subsequently sailed by the likes of historian Jerry MacMullen and ship restorer Ken Reynard. She now makes her home at the San Diego Maritime Museum, which these two stalwarts had more than a little to do with establishing as the fine institution it is today. And don&#39;t miss Richard Miles&#39;s profile of Captain Adrian Raynaud, who began his seafaring in 1914 aboard the bark Edward Sewall under Captain Quick (see SH 28, p46-47)-a &quot;must&quot; read! Send $18 ($26 in Canada, $38 offshore) to Editor Jim Raines, Seaways , PO 27593, Salt Lake City UT 84127-and don &#39; t forget to say who sent you.

graph, a perfect illustration of the concept of a &quot;tall ship in the offing,&quot; taken on the journey there. For the summer schedule, when the bark will be making two-week cruises in the North Sea and Baltic (for 200DM, or about$60 a day!), get in touch with Captain Scott at 3 Sudley Lodge, Sudley Gardens, Bognor Regis P021 lHY, West Sussex, England; tel 44 0243-82677.