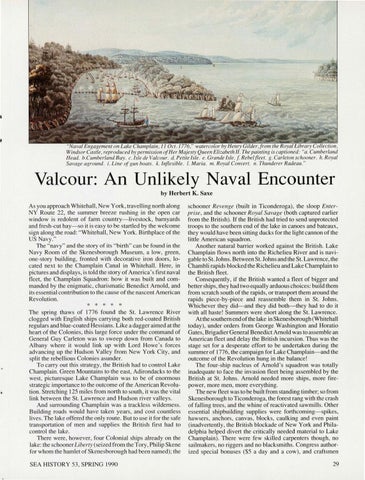 Valcour: An Unlikely Naval Encounter by Herbert K. Saxe As you approach Whitehall , New York, travelling north along NY Route 22, the summer breeze rushing in the open car window is redolent of farm country-livestock, barnyards and fresh -cut hay-so it is easy to be startled by the welcome sign along the road: "Whitehall , New York. Birthplace of the US Navy." The " navy" and the story of its " birth" can be found in the Navy Room of the Skenesborough Museum , a low , green, one-story building, fronted with decorative iron doors, located next to the Champlain Canal in Whitehall. Here, in pictures and di splays, is told the story of America 's first naval fleet, the Cham plain Squadron: how it was built and commanded by the enigmati c, charismatic Benedict Arnold , and its essential contribution to the cause of the nascent American Revolution.

The spring thaws of 1776 found the St. Lawrence River clogged with English ships carrying both red-coated British regulars and blue-coated Hessians. Like a dagger aimed at the heart of the Colonies, this large force under the command of General Guy Carleton was to sweep down from Canada to Albany where it would link up with Lord Howe's fo rces advancing up the Hudson Valley from New York City, and split the rebellious Colonies asunder. To carry out this strategy, the British had to control Lake Champlain . Green Mountains to the east, Adirondacks to the west, picturesque Lake Champlain was to be of enormous strategic importance to the outcome of the American Revo lution. Stretching 125 miles from north to south , it was the vital link between the St. Lawrence and Hudson river valleys. And surrounding Champlain was a trackless wilderness. Building roads would have taken years , and cost countless li ves. The lake offered the only route. But to use it for the safe transportation of men and supplies the British first had to control the lake. There were, however, fo ur Colonial ships already on the lake: the schooner Liberty (seized from the Tory , Philip Skene for whom the hamlet of Skenesborough had been named) ; the SEA HISTORY 53, SPRING 1990

schooner Revenge (built in Ticonderoga), the sloop Enterprise, and the schooner Royal Savage (both captured earlier from the British). If the British had tried to send unprotected troops to the southern end of the lake in canoes and bateaux , they would have been sitting ducks for the light cannon of the little American squadron. Another natural barrier worked against the British. Lake Champlain flows north into the Richelieu River and is navigable to St. Johns. Between St. Johns and the St. Lawrence, the Chambli rapids blocked the Richelieu and Lake Champlain to the British fleet. Consequently, if the British wanted a fleet of bigger and better ships, they had two equally arduous choices: build them from scratch south of the rapids, or transport them around the rapids piece-by-piece and reassemble them in St. Johns. Whichever they did-and they did both-they had to do it with all haste ! Summers were short along the St. Lawrence. At the southern end of the lake in Skenesborough (Whitehall today), under orders from George Washington and Horatio Gates, Brigadier General Benedict Arnold was to assemble an American fleet and delay the British incursion. Thus was the stage set for a desperate effort to be undertaken during the summer of 1776, the campaign for Lake Champlain-and the outcome of the Revolution hung in the bal ance! The four-ship nucleus of Arnold's squadron was totally inadequate to face the invasion fleet being assembled by the British at St. Johns. Arnold needed more ships, more firepower, more men, more everything. The new fl eet was to be built from standing timber; so from Skenesborough to Ticonderoga, the forest rang with the crash of falling trees, and the whine of reactivated sawmills. Other essential shipbuilding supplies were forthcoming-spikes, hawsers, anchors, canvas, blocks, caulking and even paint (inadvertently, the British blockade of New York and Philadelphi a helped divert the critically needed material to Lake Champlain). There were few skilled carpe nters though, no sailmakers, no riggers and no blacksmiths. Congress authorized special bonuses ($5 a day and a cow), and craftsmen 29

7 IN CLIO'S CAUSE: IF COLUMBUS WERE STILL AROUND, James W. Kinnear • TO MEET A GROWING THREAT, J. Jackson Walter • 9 THE YORKTOWN PROJECT, J...

7 IN CLIO'S CAUSE: IF COLUMBUS WERE STILL AROUND, James W. Kinnear • TO MEET A GROWING THREAT, J. Jackson Walter • 9 THE YORKTOWN PROJECT, J...