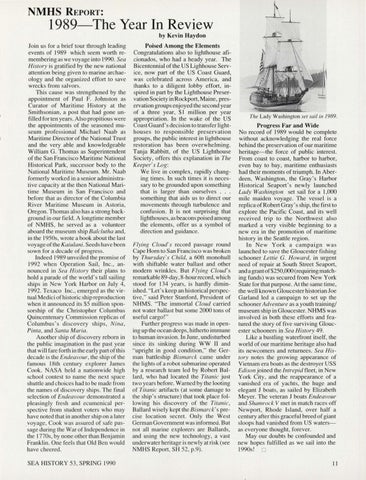 1989-The Year In Review by Kevin Haydon Join us for a brief tour through leading events of 1989 which seem worth remembering as we voyage into 1990. Sea History is gratified by the new national attention being given to marine archaeology and the organized effort to save wrecks from salvors. This cause was strengthened by the appointment of Paul F. Johnston as Curator of Maritime History at the Smithsonian, a post that had gone unfilled for ten years. Also propitious were the appointments of the seasoned museum professional Michael Naab as Maritime Director of the National Trust and the very able and knowledgeable William G. Thomas as Superintendent of the San Francisco Maritime National Historical Park, successor body to the National Maritime Museum. Mr. Naab formerly worked in a senior administrative capacity at the then National Maritime Museum in San Francisco and before that as director of the Columbia River Maritime Museum in Astoria, Oregon. Thomas also has a strong background in our field. A longtime member of NMHS , he served as a volunteer aboard the museum ship Balclutha and, in the 1950s, wrote a book about the last voyage of the Kaiulani. Seeds have been sown for a decade of progress. Indeed 1989 unveiled the promise of 1992 when Operation Sail , Inc., announced in Sea History their plans to hold a parade of the world &#39; s tall sailing ships in New York Harbor on July 4, 1992. Texaco Inc. , emerged as the virtual Medici of historic ship reproduction when it announced its $5 million sponsorship of the Christopher Columbus Quincentenary Commission replicas of Columbus &#39;s discovery ships, Nina , Pinta, and Santa Maria. Another ship of discovery reborn in the public imagination in the past year that will fare forth in the early part of this decade is the Endeavour, the ship of the famous 18th century explorer James Cook. NASA held a nationwide high school contest to name the next space shuttle and choices had to be made from the names of discovery ships. The final selection of Endeavour demonstrated a pleasingly fresh and ecumenical perspective from student voters who may have noted that in another ship on a later voyage, Cook was assured of safe passage during the War of Independence in the 1770s, by none other than Benjamin Franklin. One feels that Old Ben would have cheered. SEA HISTORY 53, SPRING 1990

Poised Among the Elements Congratulations also to lighthouse aficionados, who had a heady year. The Bicentennial of the US Lighhouse Service, now part of the US Coast Guard, was celebrated across America, and thanks to a diligent lobby effort, inspired in part by the Lighthouse Preservation Society in Rockport, Maine, preservation groups enjoyed the second year of a three year, $1 million per year appropriation. In the wake of the US Coast Guard &#39;s decision to transfer lighthouses to responsible preservation groups, the public interest in lighthouse restoration has been overwhe lming. Tanja Rabbitt, of the US Lighthouse Society, offers this explanation in The Keeper&#39;s Log: We live in comp lex, rapidly changing times. In such times it is necessary to be grounded upon something that is larger than ourselves .. . something that aids us to direct our movements through turbulence and confusion. It is not surprising that lighthouses, as beacons poised among the elements, offer us a symbol of direction and guidance. Flying Cloud&#39;s record passage round Cape Horn to San Francisco was broken by Thursday&#39;s Child, a 60ft monohull with shiftable water ballast and other modern wrinkles. But Flying Cloud&#39;s remarkable 89-day, 8-hourrecord, which stood for 134 years, is hardly diminished. &quot;Let&#39;s keep an historical perspective,&quot; said Peter Stanford, President of NHMS. &quot;The immortal Cloud carried not water ballast but some 2000 tons of useful cargo! &quot; Further progress was made in opening up the ocean deeps, hitherto immune to human invasion. In June, undisturbed since its sinking during WW II and &quot;upright in good condition,&quot; the German battleship Bismarck came under the lights of a robot submarine operated by a research team led by Robert Ballard, who had located the Titanic just two years before. Warned by the looting of Titanic artifacts (at some damage to the ship&#39;s structure) that took place following his discovery of the Titanic, Ballard wisely kept the Bismarck&#39;s precise location secret. Only the West German Government was informed. But not all marine explorers are Ballards, and using the new technology, a vast underwater heritage is newly at risk (see NMHS Report, SH 52, p.9).

The Lady Washington set sail in 1989.

Progress Far and Wide No record of 1989 would be complete without acknowledgi ng the real force behind the preservation of our maritime heritage-the force of public interest. From coast to coast, harbor to harbor, even bay to bay, maritime enthusiasts had their moments of triumph. In Aberdeen, Washington, the Gray&#39;s Harbor Historical Seaport&#39; s newly launched Lady Washington set sai l for a 1,000 mile maiden voyage. The vessel is a replica of Robert Gray &#39;s ship, the first to explore the Pacific Coast, and its well received trip to the Northwest also marked a very visible beginning to a new era in the promotion of maritime history in the Seattle region. In New York a campaign was launched to save the Gloucester fishing schooner Lettie G. Howard, in urgent need of repair at South Street Seaport, and a grant of$250,000 (requiring matching funds) was secured from New York State for that purpose. At the same time, the well known Gloucester historian Joe Garland led a campaign to set up the schooner Adventure as a youth training/ museum ship in Gloucester. NHMS was involved in both these efforts and featured the story of five surviving Gloucester schooners in Sea History 49. Like a bustling waterfront itself, the world of our maritime heritage also had its newcomers and returnees. Sea History notes the growing appearance of Vietnam era boats as the destroyer USS Edison joined the Intrepid fleet, in New York City, and the reappearance of a vanished era of yachts, the huge and elegant J boats, as sailed by Elizabeth Meyer. The veteran J boats Endeavour and Shamrock V met in match races off Newport, Rhode Island, over half a century after this graceful breed of giant sloops had vanished from US watersas everyone thought, forever. May our doubts be confounded and new hopes fulfilled as we sail into the 1990s! D 11