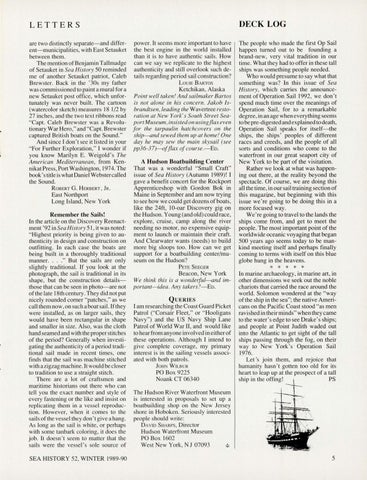 LETTERS are two distinctly separate-and different- municipalities, with East Setauket between them . The mention of Benjamin Tallmadge of Setauket in Sea History 50 reminded me of another Setauket patriot, Caleb Brewster. Back in the &#39;30s my father was commissioned to paint a mural fo r a new Setauket post office, which unfortunately was never built. The cartoon (watercolor sketch) meas ures 18 l/2 by 27 inches, and the two text ribbons read &quot;Capt. Caleb Brewster was a Revolutionary War Hero,&quot; and &quot;Capt. Brewster captured British boats on the Sound.&quot; And since I don &#39; t see it li sted in your &quot;For Further Exploration,&quot; I wonder if yo u know Mari lyn E. Weigold &#39;s The American Mediterranean, from Kennikat Press, Port Washington, 1974. The book &#39;s title is what Daniel Webstercalled the Sound. ROBERT G. HERBERT , JR. East Northport Long Island , New York

Remember the Sails! In the article on the Discovery Reenactment &#39;92 in Sea History 51, it was noted: &quot;Highest priority is being given to authenticity in design and construction on outfitting. In each case the boats are being built in a thoroughl y traditional manner. . . . &quot; But the sails are only slightly traditional. If you look at the photograph , the sail is traditional in its shape, but the construction detailsthose that can be seen in photo--are not of the late 18th century. They did not put nicely ro unded comer &quot;patches,&quot; as we call them now, on such a boat sail. If they were installed, as on larger sails, they would have been rectangular in shape and smaller in size. Also, was the cloth hand seamed and with the proper stitches of the period? Generally when investigating the authenticity of a period traditional sail made in recent times, one finds that the sai l was machine stitched with a zigzag machine. It would be closer to tradition to use a straight stitch. There are a lot of craftsmen and maritime historians out there who can te ll yo u the exact number and style of every fasteni ng or the like and insist on replicating them in a vessel reproduction. However, when it comes to the sail s of the vessel they don &#39;tgive a hang. As long as the sail is white, or perhaps with some tanbark coloring, it does the job. It doesn &#39; t seem to matter that the sai ls were the vessel&#39;s sole source of SEA HISTORY 52, WINTER 1989-90

power. It seems more important to have the best engine in the world installed than it is to have authentic sail s. How can we say we replicate to the highest authenticity and still overlook such details regarding period sail construction? LOUIE BARTOS Ketchikan, Alaska Point well taken! And sailmaker Bartos is not alone in his concern. Jakob lsbrandtsen, leading the Wavertree restoration at New York&#39;s South Street Seaport Muse um, insisted on using flax even for the tarpaulin hatchcovers on the ship--and sewed them up at home! One day he may sew the main skysail (see pp36-37)-&lt;Jf flax of course.-ED.

A Hudson Boatbuilding Center That was a wonderful &quot; Small Craft&quot; issue of Sea History (Autumn 1989)! I gave a benefit concert for the Rockport Apprenticeshop with Gordon Bok in Maine in September and am now trying to see how we could get dozens of boats, like the 24ft, I 0-oar Di scovery gig on the Hudson. Young (and old) could race, explore, cruise, camp along the river needing no motor, no expensive equipment to launch or maintain their craft. And Clearwater wants (needs) to build more big sloops too. How can we get support for a boatbuilding center/museum on the Hudson? PETE SEEGER Beacon, New York We think this is a wonderful-and important-idea. Any takers ?-Eo. QUERIES

I am researching the Coast Guard Picket Patrol (&quot;Corsair Fleet,&quot; or &quot;Hooligans Navy&quot;) and the US Navy Ship Lane Patrol of W arid War II, and would like to hear from anyone involved in eitherof these operations. Although I intend to give complete coverage, my primary interest is in the sailing vessels associated with both patrols. JOHN WILBUR PO Box 9225 Noank CT 06340 The Hudson Ri ver Waterfront Museum is interested in proposals to set up a boatbuilding shop on the New Jersey shore in Hoboken. Seriously interested people should write: DAvm SHARPS, Director Hudson Waterfront Museum PO Box 1602 West New York, N J 07093 w

The people who made the first Op Sail happen turned out to be foundin g a brand-new, very vital tradition in our time. What they had to offer in these tall ships was something people needed . Who would presume to say what that something was? In this issue of Sea History, which carries the announcement of Operation Sail 1992, we don &#39; t spend much time over the meanings of Operation Sail, for to a remarkable degree, in an age when everything seems to be pre-digested and explained to death , Operation Sail speaks for itself- the ships, the ships&#39; peoples of different races and creeds, and the people of all sorts and conditions who come to the waterfront in our great seaport city of New York to be part of the visitation. Rather we look at what was happening out there, at the reality beyond the spectacle. Of course, we are doing this all the time, in our sail training section of this magazi,ne, but beginning with this issue we&#39;re going to be doing this in a more focu sed way. We &#39; re going to travel to the lands the ships come from, and get to meet the people. The most important point of the worldwide oceanic voyaging that began 500 years ago seems today to be mankind meeting itself and perhaps finally coming to terms with itself on this blue globe hung in the heavens.

In marine archaeology, in marine art, in other dimensions we seek out the noble chariots that carried the race around the world. Solomon wondered at the &quot; way of the ship in the sea&quot;; the native Americans on the Pacific Coast stood &quot;as men ravished in their minds&quot; when they came to the water&#39;s edge to see Drake &#39;s ships; and people at Point Judith waded out into the Atlantic to get sight of the tall ships passing through the fog , on their way to New York&#39; s Âˇ Operation Sail 1976. Let &#39;s join them, and rejoice that humanity hasn &#39;t gotten too old for its heart to leap up at the prospect of a tall PS ship in the offing! ~