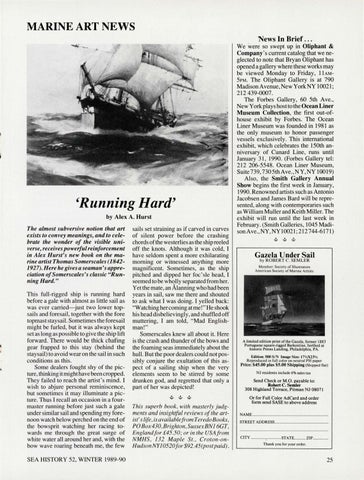 The almost subversive notion that art exists to convey meanings, and to celebrate the wonder of the visible universe, receives powerful reinforcement in Alex Hurst&#39;s new book on the marine artist Thomas Somerscales (18421927). Here he gives a seaman&#39;s appreciation of Somerscales&#39;s classic &quot;Running Hard.&quot; This full-rigged ship is running hard before a gale with almost as little sail as was ever carried-just two lower topsails and foresail, together with the fore topmast staysail. Sometimes the foresail might be furled, but it was always kept set as long as possible to give the ship lift forward . There would be thick chafing gear frapped to this stay (behind the staysail) to avoid wear on the sail in such conditions as this. Some dealers fought shy of the picture, thinking it might have been cropped. They failed to reach the artist&#39;s mind. I wish to abjure personal reminiscence, but sometimes it may illuminate a picture. Thus I recall an occasion in a fourmaster running before just such a gale under similar sail and spending my forenoon watch below perched on the end of the bowsprit watching her racing towards me through the great surge of white water all around her and, with the bow wave roaring beneath me, the few SEA HISTORY 52, WINTER 1989-90

sails set straining as if carved in curves of silent power before the crashing chords of the westerlies as the ship reeled off the knots. Although it was cold, I have seldom spent a more exhilarating morning or witnessed anything more magnificent. Sometimes, as the ship pitched and dipped her foc &#39;sle head, I seemed to be wholly separated from her. Yet the mate, an Alanning who had been years in sail, saw me there and shouted to ask what I was doing. I yelled back: &quot;Watching her coming at me!&quot; He shook his head disbelievingly, and shuffled off muttering, I am told , &quot;Mad Englishman! &quot; Somerscales knew all about it. Here is the crash and thunder of the bows and the foaming seas immediately about the hull. But the poor dealers could not possibly conjure the exultation of this aspect of a sailing ship when the very elements seem to be stirred by some drunken god, and regretted that only a part of her was depicted!

www This superb book, with masterly judgments and insightful reviews of the artist&#39; s life, is available from Te redo Books, PO Box430,Brighton,SussexBNJ 6GT, England for ÂŁ45.50; or in the USA from NMHS , 132 Maple St ., Croton-onHudsonNYJ0520for$92.45(postpaid).

We were so swept up in Oliphant &amp; Company&#39;s current catalog that we neglected to note that Bryan Oliphant has opened a gallery where these works may be viewed Monday to Friday, l 1AM5PM. The Oliphant Gallery is at 790 Madison A venue, New York NY 10021; 212 439-0007. The Forbes Gallery, 60 5th Ave., New York plays host to the Ocean Liner Museum Collection, the first out-ofhouse exhibit by Forbes. The Ocean Liner Museum was founded in 1981 as the only museum to honor passenger vessels exclusively. This international exhibit, which celebrates the 150th anniversary of Cunard Line, runs until January 31, 1990. (Forbes Gallery tel: 212 206-5548. Ocean Liner Museum, Suite739, 7305thAve.,NY,NY 10019) Also, the Smith Gallery Annual Show begins the first week in January, 1990. Renowned artists such as Antonio Jacobsen and James Bard will be represented, along with contemporaries such as William Muller and Keith Miller. The exhibit will run until the last week in February. (Smith Galleries, 1045 Madison Ave., NY, NY10021; 212 744-6171) .ti