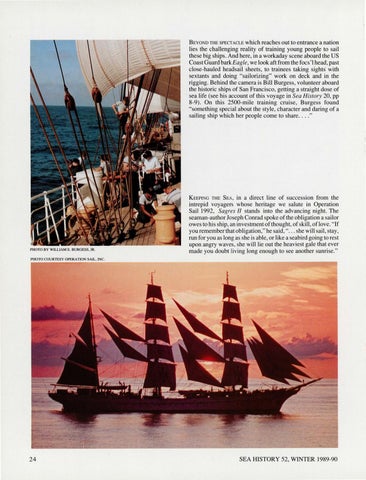 BEYOND THE SPECTACLE which reaches out to entrance a nation lies the challenging reality of training young people to sail these big ships. And here, in a workaday scene aboard the US Coast Guard bark Eagle, we look aft from the foes &#39;l head; past close-hauled headsail sheets, to trainees taking sights with sextants and doing &quot;sailorizing&quot; work on deck and in the rigging. Behind the camera is Bill Burgess, volunteer aboard the historic ships of San Francisco, getting a straight dose of Âˇ sea life (see his account of this voyage in Sea History 20, pp 8-9). On this 2500-mile training cruise, Burgess found &quot;something special about the style, character and daring of a sailing ship which her people come to share .... &quot;

KEEPING THE SEA, in a direct line of succession from the intrepid voyagers whose heritage we salute in Operation Sail 1992, Sagres II stands into the advancing night. The seaman-author Joseph Conrad spoke of the obligation a sailor owes to his ship, an investment of thought, of skill, oflove. &quot;If you remember that obligation,&quot; he said,&quot; ... she will sail, stay, run for you as long as she is able, or like a seabird going to rest upon angry waves, she will lie out the heaviest gale that ever made you doubt living long enough to see another sunrise.&quot;