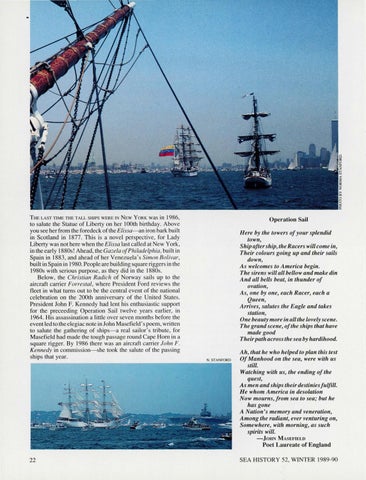 THE LAST TIME THE TALL SHIPS WERE IN NEWYORK was in 1986, to salute the Statue of Liberty on her JOOth birthday. Above you see her from the foredeck of the Elissa-an iron bark bui It in Scotland in 1877. This is a novel perspective, for Lady Liberty was not here when the Elissa last called at New York, in the early 1880s! Ahead, the Gaze la ofPhiladelphia, built in Spain in 1883, and ahead of her Venezuela&#39;s Simon Bolivar, built in Spain in 1980. People are building square riggers in the 1980s with serious purpose, as they did in the 1880s. Below, the Christian Radich of Norway sails up to the aircraft carrier Forrestal, where President Ford reviews the fleet in what turns out to be the central event of the national celebration on the 200th anniversary of the United States. President John F. Kennedy had lent his enthusiastic support for the preceeding Operation Sail twelve years earlier, in 1964. His assassination a little over seven months before the event led to the elegiac note in John Masefield &#39;s poem, written to salute the gathering of ships-a real sailor&#39; s tribute, for Masefield had made the tough passage round Cape Hom in a square rigger. By 1986 there was an aircraft carrier John_F. Kennedy in commission-she took the salute of the passing ships that year. N. STANFORD - - - - - - - - - - - - - - - - - - - --...,

Operation Sail Here by the towers of your splendid town, Ship after ship, the Racers will come in, Their colours going up and their sails down, As welcomes to America begin. The sirens will all bellow and make din And all bells beat, in thunder of ovation, As, one by one, each Racer, each a Queen, Arrives, salutes the Eagle and takes station, One beauty more in all the lovely scene. The grand scene, of the ships that have made good Their path across the sea by hardihood. Ah, that he who helped to plan this test Of Manhood on the sea, were with us still. Watching with us, the ending of the quest, As men and ships their destinies fulfill. He whom America in desolation Now mourns, from sea to sea; but he has gone A Nation&#39;s memory and veneration, Among the radiant, ever venturing on, Somewhere, with morning, as such spirits will. -JOHN M ASEFIELD