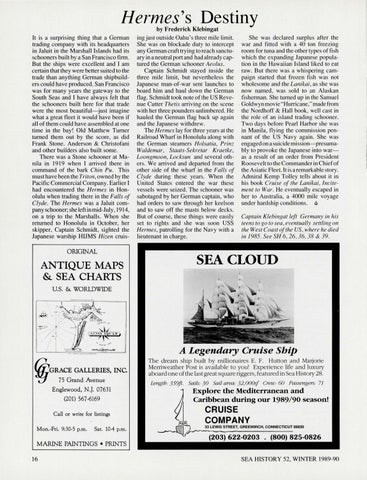 It is a surprising thing that a German trading company with its headquarters in Jaluit in the Marshall Islands had its schooners built by a San Francisco firm. But the ships were excellent and I am certain that they were better suited to the trade than anything German shipbuilders could have produced. San Francisco was for many years the gateway to the South Seas and I have always felt that the schooners built here for that trade were the most beautiful- just imagine what a great fleet it would have been if all of them could have assembled at one time in the bay! Old Matthew Turner turned them out by the score, as did Frank Stone. Anderson &amp; Christofani and other builders also built some. There was a Stone schooner at Manila in 1919 when I arrived there in command of the bark Chin Pu. This must have been the Triton , owned by the Pacific Commercial Company. Earlier I had encountered the Hermes in Honolulu when trading there in the Falls of Clyde. The Hermes was a Jaluit company schooner; she left in mid-July, 1914, on a trip to the Marshall s. When she returned to Honolulu in October, her skipper, Captain Schmidt, sighted the Japanese warship HUMS Hizen crui s-

She was declared surplus after the ingjust outside Oahu &#39;s three mile limit. She was on blockade duty to intercept war and fitted with a 40 ton freezing any German craft trying to reach sanctu- room for tuna and the other types of fi sh ary in a neutral port and had already cap- which the ex panding Japanese population in the Hawaiian Island liked to eat tured the German schooner Aeolus. Captain Schmidt stayed inside the raw. But there was a whispering camthree mile limit, but nevertheless the paign started that frozen fish was not Japanese man-of-war sent launches to wholesome and the lanikai, as she was board him and haul down the German now named, was sold to an Alaskan flag . Schmidt took note of the US Reve- fi sherman. She turned up in the Samuel nue Cutter Thetis arriving on the scene . Goldwyn movie &quot;Hurricane,&quot; made from with her three pounders unlimbered . He the Nordhoff &amp; Hall book, well cast in hauled the German flag back up again the role of an island trading schooner. Two days before Pearl Harbor she was and the Japanese withdrew. The Hermes lay for three years at the in Manila, flyin g the commi ss ion penRai lroad Wharf in Honolulu along with nant of the US Navy again. She was the German steamers Holsatia, Prinz engaged on a suicide mission- presumaWaldemar, Staats-Sekretar Kraetke, bly to provoke the Japanese into warloongmoon, l ocksun and several oth- as a result of an order from President ers. We arrived and departed from the Roosevelt to the Commander in Chief of other side of the wharf in the Falls of the Asiatic Fleet. It is a remarkable story. Clyde during these years. When the Adm iral Kemp Tolley tells about it in United States entered the war these his book Cruise of the lanikai , Incitevessels were seized. The schooner was ment to War. He eventually escaped in sabotaged by her German captain, who her to Australia, a 4000 mile voyage had orders to saw through her keelson under hardship conditions. .V and to saw off the masts below decks. But of course, these things were easily Captain Klebingat left Germany in his set to rights and she was soon USS teens to go to sea, eventually settling on Hermes, patrolling for the Navy with a the West Coast of the US, where he died in 1985. SeeSH 6, 26, 36, 38 &amp; 39. lieutenant in charge.

Explore the Mediterranean and Caribbean during our 1989/90 season!