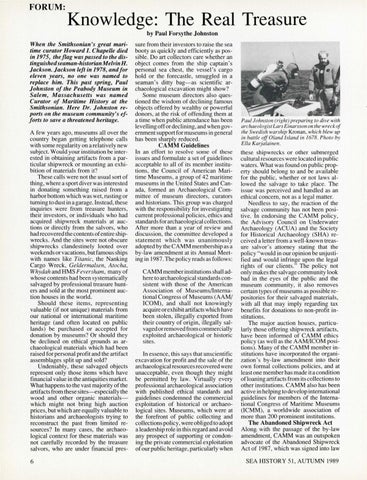 When the Smithsonian&#39;s great maritime curator Howard I. Chapelle died in 1975, the flag was passed to the distinguished seaman-historian Melvin H. Jackson. Jackson left in 1978, and for eleven years, no one was named to replace him. This past spring, Paul Johnston of the Peabody Museum in Salem, Massachusetts was named Curator of Maritime History at the Smithsonian. Here Dr. Johnston reports on the museum community&#39;s efforts to save a threatened heritage. A few years ago, museums all over the country began getting telephone calls with some regularity on a relatively new subject. Would your institution be interested in obtaining artifacts from a particular shipwreck or mounting an exhibition of materials from it? These calls were not the usual sort of thing, where a sport diver was interested in donating something raised from a harbor bottom which was wet, rusting or turning to dust in a garage. Instead , these inquiries were from treasure hunters, their investors, or individuals who had acquired shipwreck materials at auctions or directly from the salvors, who had recovered the contents of entire shipwrecks. And the sites were not obscure shipwrecks clandestinely looted over weekends or vacations, but famous ships with names like Titanic , the Nanking Cargo Wreck, Geldermalsen, Atocha, Whydah and HMS Feversham, many of whose contents had been systematically salvaged by professional treasure hunters and sold at the most prominent auction houses in the world. Should these items, representing valuable (if not unique) materials from our national or international maritime heritage (and often located on public lands) be purchased or accepted for donation by museums? Or should they be declined on ethical grounds as archaeological materials which had been raised for personal profit and the artifact assemblages split up and sold? Undeniably, these salvaged objects represent only those items which have financial value in the antiquities market. What happens to the vast majority of the artifacts from these sites-especially the wood and other organic materialswhich might not bring high auction prices, but which are equally valuable to historians and archaeologists trying to reconstruct the past from limited resources? In many cases, the archaeological context for these material s was not carefully recorded by the treasure salvors , who are under financial pres-

sure from their investors to raise the sea booty as quickly and efficiently as possible. Do art collectors care whether an object comes from the ship captain&#39;s personal sea chest, the vessel&#39;s cargo hold or the forecastle, smuggled in a seaman&#39;s ditty bag-as scientific archaeological excavation might show? Some museum directors also questioned the wisdom of declining famous objects offered by wealthy or powerful donors, at the risk of offending them at a time when public attendance has been levelling off or declining, and when government support for museums in general has been sharply reduced. CAMM Guidelines In an eff01t to resolve some of these issues and formulate a set of guidelines acceptable to all of its member institutions, the Counci l of American Maritime Museums, a group of 42 maritime museums in the United States and Canada, formed an Archaeological Committee of museum directors, curators and historians. This group was charged with the responsibility for investigating current professional policies, ethics and standards for archaeological collections. After more than a year of review and discussion , the committee developed a statement which was unanimou sly adopted by the CAMM membership as a by-law amendment at its Annual Meeting in 1987. The policy reads as follows: CAMM member institutions shall adhere to archaeological standards consistent with those of the American Association of Mu seum s/International Congress of Museums (AAM/ ICOM) , and shall not knowingly acquire orexhibitartifacts which have been stolen, illegally exported from their country of origin, illegally salvaged orremoved from commercially exploited archaeological or hi storic sites. In essence, thi s says that unscientific excavation for profit and the sale of the archaeological resources recovered were unacceptable, even though they might be permitted by law. Virtually every professional archaeological association with published ethical standards and guidelines condemned the commercial exploitation of historical or archaeological sites. Museums, which were at the forefront of public collecting and collections policy, were obliged to adopt a leadership role in this regard and avoid any prospect of supporting or condoning the private commercial exploitation of our public heritage, particularly when

Paul Johnston (right) preparing to dive with archaeologist Lars Einarsson on the wreck of the Swedish warship Kronan, which blew up in baltle off Oland Island in 1678 . Photo by Ella Kmjalainen.

these shipwrecks or other submerged cultural resources were located in public waters. What was found on public property should belong to and be available for the public, whether or not laws allowed the salvage to take place. The issue was perceived and handled as an ethical concern, not as a legal matter. Needless to say, the reaction of the salvage community has not been positive. In endorsing the CAMM policy, the Advisory Council on Underwater Archaeology (ACUA) and the Society for Hi storical Archaeology (SHA) received a letter from a well-known treasure salvor&#39;s attorney stating that the policy &quot;would in our opinion be unjusti fied and would infringe upon the legal rights of our clients.&quot; The policy not only makes the salvage community look bad in the eyes of the public and the museum community, it also removes certain types of museums as possible repositories for their salvaged materials, with all that may imply regarding tax benefits for donations to non-profit institutions. The major auction houses, particularly those offering shipwreck artifacts, have been informed of CAMM ethics policy (as well as the AAM/ICOM positions). Many of the CAMM member institutions have incorporated the organization &#39;s by-law amendment into their own formal collections policies, and at least one member has made ita condition ofloaning artifacts from its collections to other institutions. CAMM also has been active in helping to develop international guidelines for members of the International Congress of Maritime Museums (ICMM), a worldwide association of more than 200 prominent institutions. The Abandoned Shipwreck Act Along with the passage of the by-law amendment, CAMM was an outspoken advocate of the Abandoned Shipwreck Act of 1987, which was signed into law SEA HISTORY 51, AUTUMN 1989