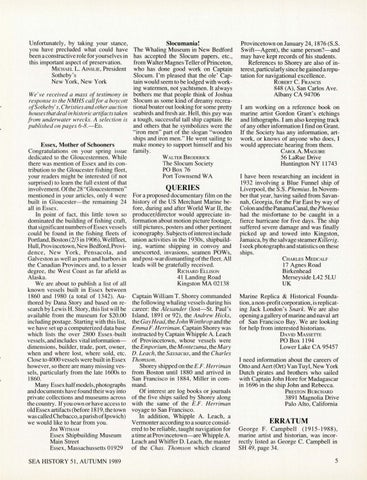 Unfortunately, by taking your stance, you have precluded what could have been a constructive role for yourselves in this important aspect of preservation. MICHAEL L. AINSLIE, President Sotheby&#39;s New York, New York

We&#39; ve received a mass of testimony in response to the NMHS call for a boycott ofSotheby&#39; s, Christies and other auction houses that deal in historic artifacts taken from underwater wrecks. A selection is published on pages 6-8.-ED.

Essex, Mother of Schooners Congratulations on your spring issue dedicated to the Gloucestermen. While there was mention of Essex and its contribution to the Gloucester fishing fleet, your readers might be interested (if not surprised) to learn the full extent of that involvement. Ofthe28 &quot;Gloucestermen&quot; mentioned in your articles, only 4 were built in Gloucester-the remaining 24 all in Essex. In point of fact, this little town so dominated the building of fishing craft, that significant numbers of Essex vessels could be found in the fishing fleets of Portland, Boston (2/3 in 1906), Wellfleet, Hull, Provincetown, New Bedford, Providence , New York , Pensacola, and Galveston as well as ports and harbors in the Canadian Provinces and , to a lesser degree, the West Coast as far afield as Alaska. We are about to publish a list of all known vessels built in Essex between 1860 and 1980 (a total of 1342). Authored by Dana Story and based on research by Lewis H. Story, this list will be available from the museum for $20.00 including postage. Starting with this list, we have set up a computerized data base which lists the over 2800 Essex-built vessels , and includes vital informationdimensions, builder, trade, port, owner, when and where lost, where sold, etc. Close to 4000 vessels were built in Essex however, so there are many missing vessels, particularly from the late 1600s to 1860. Many Essex half models, photographs and documents have found their way into private collections and museums across the country. If you own or have access to old Essex artifacts (before 1819, the town was called Chebacco, a parish oflpswich) we would like to hear from you. JIM WITHAM Essex Shipbuilding Museum Main Street Essex, Massachussetts 01929 SEA HISTORY 51, AUTUMN 1989

Slocumania! The Whaling Museum in New Bedford has accepted the Slocum papers, etc., from Walter Magnes Tellerof Princeton, who has done good work on Captain Slocum. I&#39;m pleased that the ole &#39; Captain would seem to be lodged with working watermen, not yachtsmen. It always bothers me that people think of Joshua Slocum as some kind of dreamy recreational boater out looking for some pretty seabirds and fresh air. Hell , this guy was a tough , successful tall ship captain. He and others that he symbolizes were the &quot; iron men&quot; part of the slogan &quot;wooden ships and iron men .&quot; He went sailing to make money to support himself and his family . WALTER BRODERICK The Slocum Society PO Box 76 Port Townsend WA

QUERIES For a proposed documentary film on the history of the US Merchant Marine before, during and after World War II, the producer/director would appreciate information about motion picture footage, still pictures, posters and other pertinent iconography. Subjects of interest include union activities in the 1930s, shipbuilding, wartime shipping in convoy and unescorted, invasions, seamen POWs, and post-war dismantling of the fleet. All leads will be gratefully received. RICHARD ELLISON 41 Landing Road Kingston MA 02138 Captain William T. Shorey commanded the following whaling vessels during his career: the Alexander (lost-St. Paul&#39;s Island, 1891 or 92), the Andrew Hicks, the Gay Head, th elohn Winthrop and the Emma F. Herriman. Captain Shorey was instructed by Captain Whipple A. Leach of Provincetown, whose vessels were the Emporium, the Montezuma, the Mary D. Leach, the Sassacus, and the Charles Thomson. Shorey shipped on the E.F. Herriman from Boston until 1880 and arrived in San Francisco in 1884, Miller in command. Of interest are log books or journals of the five ships sailed by Shorey along with the same of the E.F. Herriman voyage to San Francisco. In addition , Whipple A. Leach, a Vermonter according to a source considered to be reliable, taught navigation for a time at Provincetown-are Whipple A. Leach and Whiffer D. Leach, the master of the Chas. Thomson which cleared

Provincetown on January 24, 1876 (S.S. Swift-Agent), the same person?-and may have kept records of his students. References to Shorey are also of interest, particular! y since he gained a reputation for navigational excellence. ROBERT C. FRANCIS 848 (A), San Carlos Ave. Albany CA 94706 I am working on a reference book on marine artist Gordon Grant&#39;s etchings and lithographs. I am also keeping track of any other information I find on Grant. If the Society has any information, artwork, or knows of anyone who does, I would appreciate hearing from them. CAROL A. MAGUIRE 56 LaRue Drive Huntington NY 11743 I have been researching an incident in 1932 involving a Blue Funnel ship of Liverpool , the S.S. Phemius. In November that year, having sailed from Savannah, Georgia, for the Far East by way of Colon and the Panama Canal, thePhemius had the misfortune to be caught in a fierce hurricane for five days. The ship suffered severe damage and was finally picked up and towed into Kingston, Jamaica, by the salvage steamer Killerig. I seek photographs and statistics on these ships. CHARLES MEDCALF 17 Agnes Road Birkenhead Merseyside L42 5LU UK Marine Replica &amp; Historical Foundation, a non-profit corporation, is replicating Jack London&#39;s Snark. We are also opening a gallery of marine and naval art of San Francisco Bay. We are looking for help from interested historians. DA YID MASSETTE PO Box 1194 Lower Lake CA 95457 I need information about the careers of Otto and Aert (Ort) Van Tuy!, New York Dutch pirates and brothers who sailed with Captain John Hore for Madagascar in 1696 in the ship John and Rebecca. PRESTON BURCHARD 3891 Magnolia Drive Palo Alto, California